Peony’s effectiveness as an ancient cure translated into a tool of statecraft in the eighteenth century. 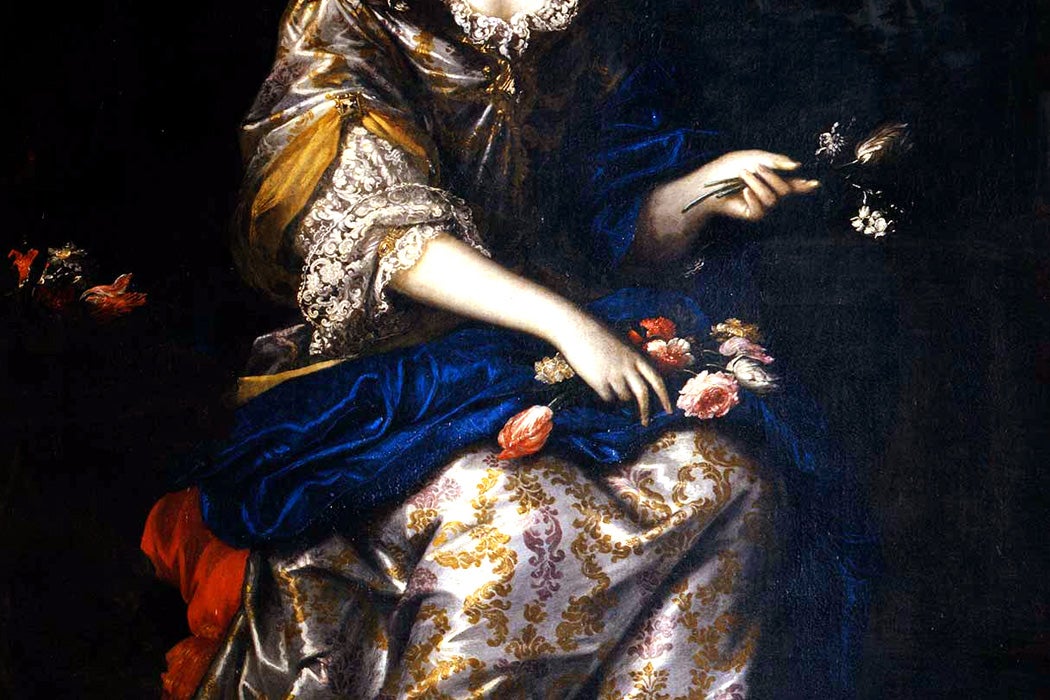 In 1735, a Viennese baroness wrote to the last princess of the famed Medici dynasty, Anna Maria Luisa de’ Medici, thanking her for sending a miraculous infant convulsion powder. The baroness stated that the children she treated with the powder had been so violently taken by convulsions that physicians had “given up on them.” Not only had the “miraculous powders” cured the children, after a number of months, the children remained in perfect health.

Anna Maria Luisa de’ Medici was well known for her miraculous powder, made from a skull of a man who died violently but was never buried, “Oriental pearls,” red and white coral, yellow amber, and peony roots and seeds. Pulverized human skull and “Oriental pearls” stand out as more outrageous ingredients, but it was actually the use of peony root that might have made Anna Maria Luisa’s powder effective—and enabled her to create valuable political alliances, protecting Florence and the Grand Duchy of Tuscany as the end of the Medici dynasty neared.

While today we think of peonies as beautiful ornamental flowers, for much of their history they were viewed as an important medicinal plant. Writings discovered in an imperial Han tomb confirm that peony root (called “danpi”) was used to treat blood stasis nearly 2,000 years ago in China. In traditional Chinese medicine, the common Chinese garden peony (Paeonia lactiflora) was used to treat high blood pressure, inflammation, and gynecological ailments, including hot flashes and irregular menstrual cycles.

In the ancient Greco-Roman world, peony, often in combination with mistletoe, was prescribed not only to induce menstrual flow but also to treat seizures and epilepsy. The Roman physician Galen recommended peony root tied around the necks of children as an effective remedy for “the falling sickness,” a common premodern phrase for epilepsy. Throughout the Middle Ages, peony continued to be used for seizures and epilepsy, either worn around the neck as a talisman or prescribed by physicians.

This prescription persisted into sixteenth-century Europe. Castore Durante’s popular 1585 Italian herbal—a book that details the medicinal virtues of plants and is now part of the Dumbarton Oaks Rare Book Collection—described giving three spoonfuls of distilled water of peony root and flowers to children who suffered from “mal caduco” (epilepsy or seizures) as well as apoplectics and paralytics. Similarly, the English naturalist John Gerarde noted in his 1597 herbal (a copy of which is also held at Dumbarton Oaks) that a root extraction or syrup made from peony “helpeth greatly the falling sickness.”

Thus, by the time of Anna Maria Luisa, peonies were well established as a treatment for epilepsy as well as more general convulsions. Interestingly, one of the earliest scientific studies on the bioactivity of peony in 1991 suggested that Anna Maria Luisa’s infant convulsion powder could have produced beneficial biochemical effects in the children it treated. The study identified several chemical compounds found in the root of common peony (Paeonia officinalis) with documented anticonvulsant properties, including paeoniflorin, albiflorin, oxypaeoniflorin, and gallotannins. When isolated, the compounds albiflorin and gallotannin (and to a lesser extent fractions of paeoniflorin) blocked extracellular calcium, which is linked to seizure-related phenomena. Another preliminary study demonstrated that the administration of antiepileptic drugs early in life—for example, during childhood—might alter the long-term course of epilepsy, with the possibility of preventing it from becoming an “intractable disorder.”

Today, the primary approach to treating epilepsy and suppressing seizures is to alter the neural network’s excitability or inhibition by regulating chemical compounds such as sodium and calcium. Drugs like ethosuximide reduce abnormal electrical activity in the brain by regulating calcium influx in cells. Thus, today there is little market demand to further investigate the peony root’s similar biochemical compounds or potential pharmaceutical applications. This lack of contemporary interest, however, does not make the biochemical activity of peony insignificant historically.

The probable effectiveness of her infant convulsion powder increased Anna Maria Luisa’s socio-political influence. In fact, several letters preserved in the Florence State Archive attest to the powder’s efficacy and popularity. In one such letter, the previously mentioned Viennese baroness wrote again to Anna Maria Luisa requesting additional portions of powder given the “extraordinary effects they had on three children from the most important families of Vienna.” Anna Maria Luisa replied that she would send the baroness as much of the powder as she desired to distribute to her friends, considering that she had “put the powder to such good use.”

The gift of “miraculous” medicine to the Viennese court was not simply altruistic. As a woman, Anna Maria Luisa was barred from inheriting and ruling Tuscany on the death of her brother, the last Medici grand duke. Although she lacked official power, Anna Maria Luisa fashioned influence through the gift of her infant convulsion powder, which allowed her to ingratiate herself with some of Vienna’s most important and powerful families. This ensured goodwill and communication between the Grand Duchy of Tuscany and the court that would decide its fate. By the end of the Medici dynasty, the Viennese court was the headquarters of the Habsburg dynasty and the center of its imperial politics. In 1737, Francis of Lorraine, future head of the Holy Roman Empire, which controlled much of Europe at the time, became the grand duke of Tuscany and ruled Florence from the imperial court in Vienna—a court much indebted to Anna Maria Luisa’s infant convulsion powder.

We tend to view premodern therapeutics as ineffectual and even dangerous. But the story of peony and Anna Maria Luisa’s recipe, a chapter in the long history of herbal treatments for epilepsy, reveals that the evolution of medicine is more complicated. For much of history, humans relied on natural sources, most often plants, to treat illness and maintain health. Over the course of the twentieth century, natural or homeopathic medicine diverged from conventional medicine that relied on chemically synthesized drugs, but the binary is not as strict as we might assume. By exploring history through the lens of plants like peony, the Plant Humanities Initiative reminds us of the extraordinary ways in which plant knowledge has influenced our health, well-being, and even political power.