Plant of the Month: Cork

Why is cork so strongly associated with bottle stoppers? The answer goes back centuries. 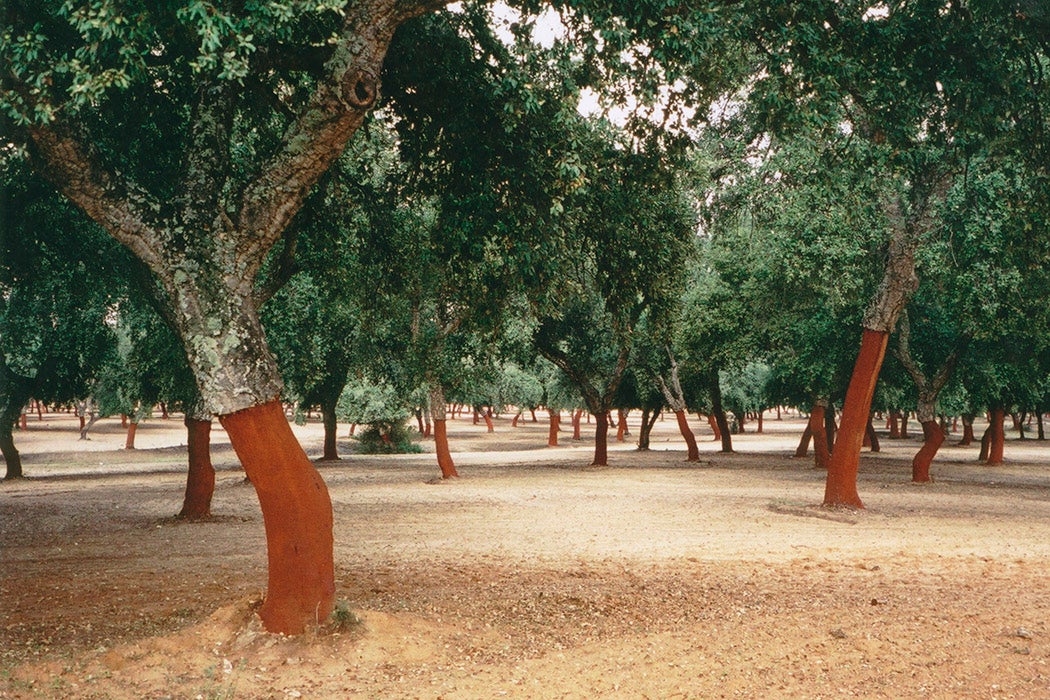 Cork is ubiquitous in modern life, ranging from its humblest use as a material for footbeds in shoes to modern spacecraft insulation. Yet its most prominent use, the bottle stopper, points to a mystery in our common material culture. When did we start using corks in bottles? Better asked, why did we stop using cork stoppers?

The common narrative of the modern cork stopper goes that in the seventeenth century, the French monk Dom Pierre Pérignon had a problem. He had successfully refined a winemaking technique that blended black and red grapes to create a clear sparkling wine. But how to keep the bubbles in the bottle? Pérignon turned to a plant whose bark had been used extensively for centuries—the cork oak tree. According to the most famous version of the story, Pérignon realized that cork could seal his champagne bottles when he observed Spanish travelers using tree bark to seal their water gourds. Not only was this the birth of a modern bottle stopper that could seal bottles far better than the stoppers made from other materials (like glass), it was also the genesis of sparkling champagne. But the way history is told here makes it appear that cork was not used before then, and that is far from the reality.

Greeks, Romans, Egyptians, and people from other cultures used cork bark as buoys for fishing nets, materials for shoes, and, of course, to stopper barrels and bottles.

Cork has in fact long been used in a variety of roles, including the famous stopper. The cork oak tree, Quercus suber, is native to the Mediterranean, especially modern-day Portugal and Spain, and was well known for its utility throughout antiquity. References to the tree in ancient texts include citations by Pliny the Elder, Theophrastus, and Pausanias. Greeks, Romans, Egyptians, and people from other cultures used cork bark as buoys for fishing nets, materials for shoes, and, of course, to stopper barrels and bottles. So why does Dom Pérignon receive the credit for cork stoppers? The answer is twofold.

First, the general use of cork in much of western Europe was disrupted during the medieval period. Beginning in the eighth century CE, Muslim control spread over much of the Iberian Peninsula, disrupting viticulture and trade. While some have claimed that Muslim proscriptions against drinking alcohol led to the loss of cork bottle stoppers, wine drinking was in fact tolerated in the Umayyad caliphate, particularly among non-Muslim inhabitants. We do not know for certain whether corks were the stopper of choice, but cork was not a widely traded commodity at the time. Records indicate that cork use was mainly confined to local industries during this period and that Spain and Portugal only began to trade cork in large quantities in the fifteenth century, near the end of Muslim control of the peninsula. (Even then, it was primarily for shipbuilding.) A key feature was missing that confined knowledge of cork’s use as a bottle stopper to local clusters.

The technology behind modern glass bottles paved the path to fame for the cork stopper, alongside broader trends in the industrialization and later mechanization of Europe. By the mid-seventeenth century, European glassmakers had made a number of innovations that allowed for much wider adoption of glass bottles. England began to dominate glass bottle making in this period, first with the introduction of coal fuel. By the middle of the seventeenth century, a new type of bottle suitable for carrying liquids emerged. Immediately called English bottles, they had thick walls that made them sturdy, and their narrow necks allowed them to be sealed. This not only meant that industrial production of beverages could expand as English bottles were produced throughout Europe, it also required an enclosure that would preserve the drink. Cork’s unique features made it perfect for this role.

In his 1665 book Micrographia, English scientist Robert Hooke undertook some of the earliest investigations of organic matter using a microscope. In his study of cork, he noted small pores or boxes that made up its bark. They were empty, leading him to hypothesize that the space in these pores gave cork its buoyancy and, more importantly, allowed it to squish to provide an airtight seal in a bottle. This was the first time he saw such pores, but he eventually realized that many objects showed them under his microscope. By remarking that the lattice walls of cork reminded him of the small rooms of a monastery—called cells—Hooke coined the term “cell” as the fundamental unit, the building block, of life.

With the manufacturing boom in bottle making and the knowledge that cork could provide a high-quality seal, the cork tree experienced its own industrialization. Sparkling wine like Dom Pérignon’s required airtight stoppers, cementing the connection between the birth of champagne and corks. While the earliest corks for French champagne likely were produced from the limited number of French cork trees, Iberian cork forests dominated the emerging international trade by the eighteenth century.

The explosive growth of the cork industry has been accompanied by an ebb and flow in cork’s popularity as a bottle stopper. By the latter half of the twentieth century, plastic and metal enclosures presented cheap alternatives. Alongside a spate of cork taint spoiling wine bottles in the late 1990s and early 2000, many wine enthusiasts today grew up with these alternate enclosures. The industry has mounted a successful counterattack: the Portuguese Cork Association (Associação Portuguesa da Cortiça) reported in a 2019/20 study that bottle stoppers dominated the industry, representing 71 percent of exports made from cork, worth €476.9 million, up 18 percent from 2018.

Cork’s resurgence is due in no small part to its status as a renewable resource. While consumers might know that cork products are made almost exclusively from the bark of the cork oak, many are unaware that the process of stripping the bark does not harm the tree. In fact, it can be repeatedly harvested for bark every nine years over the course of its three hundred–year lifespan. In fact, human cultivation of cork trees has been described as “a model for the integration of sustainable land-use and biodiversity conservation,” and schemes to protect cork savannah ecosystems can go hand in hand with promoting the economic viability of cork products.

While cork may seem an everyday object, it enjoys a long and storied history. From the vineyard to the laboratory, the bark of the cork tree has provided useful answers to the problems of industries and researchers alike. The lessons cork can teach us about the sustainable use of plants that align the interests of industry and conservation are a model for further work in transforming our relationship with natural resources. These types of interdisciplinary studies examining the central role of plants touching all areas of our lives and cultures are the core of the Plant Humanities Initiative.

Share Tweet Email Print
Have a correction or comment about this article?
Please contact us.
Ancient worldtreesHistorical ArchaeologyHuman EcologyMicrographia: or some physiological descriptions of minute bodies made by magnifying glasses with observations and Inquiries thereuponReview (Fernand Braudel Center)

In Search of Unique Iberian Ship Design Concepts
By: Filipe Castro
Historical Archaeology, Vol. 42, No. 2 (2008), pp. 63-87
Springer
Engraving, magnified view of two different sections of the pores of cork, and a branch
By: Robert Hooke
Micrographia: or some physiological descriptions of minute bodies made by magnifying glasses with observations and Inquiries thereupon, 1665
Portugal between Two Empires
By: Miriam Halpern Pereira
Review (Fernand Braudel Center), Vol. 25, No. 2 (2002), pp. 103-135
Research Foundation of State University of New York for and on behalf of the Fernand Braudel Center
Cork Oak Landscapes, Promised or Compromised Lands? A Case Study of a Traditional Cultural Landscape in Southern Spain
By: Arantzazu Acha and Helen S. Newing
Human Ecology, Vol. 43, No. 4 (AUGUST 2015), pp. 601-611
Springer