In the nineteenth century, enterprising toymakers developed a novel way to bring theater into the home. 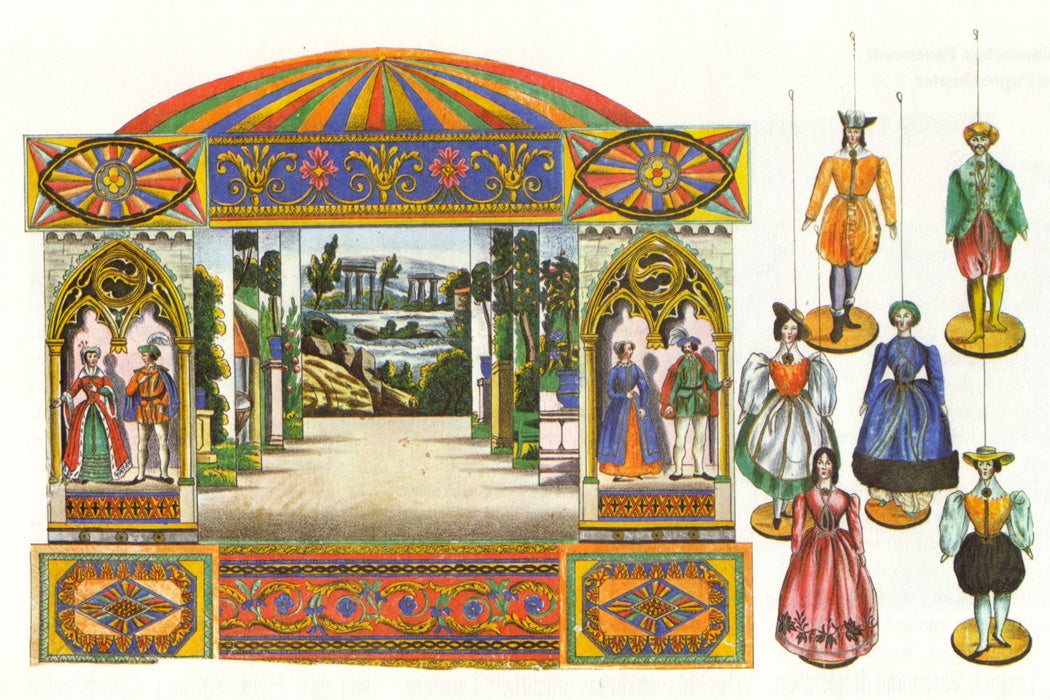 In the Regency era (early 1800s), live theater was so popular that it regularly inspired riots. In 1809, when the Covent Garden Theater tried to raise ticket prices, audiences were so incensed that they revolted. For more than two months straight, they shouted, shook rattles, rung bells, and even brought pigs into the theater to drown out the actors. The protest was successful, and the administration gave up on the price hike.

Meanwhile, crowds packed into the “blood tubs,” unofficial performances held in abandoned warehouses and holes dug into the ground. The typical fare included lewd songs, dramatizations of shocking local crimes, and twenty-minute abridgements of Shakespeare. The shows changed so frequently that the actors tended to make up the stories as they went along. The theaters were unlicensed, meaning that both audiences and actors risked imprisonment for participating. Nonetheless, the blood tubs were so popular that they sometimes gave as many as six performances a day to audiences of hundreds, most of them children.

Clearly, people were hungry for entertainment. And in this time before Netflix and YouTube, enterprising toymakers developed a novel way to bring entertainment into the home: paper theaters. For “one penny plain, two cents colored,” you got a tiny cardboard stage about the size of a paperback book, complete with a proscenium arch, curtains, and sometimes even a paper audience. The characters were laid out on sheets of paper, frozen in dramatic poses: villains brandish revolvers capped with clouds of gunpowder, jolly sailors hook arms and dance, clowns emerge from barrels.

The heroes appear over and over again, taking on as many attitudes as the plot requires. Then there are the sets, storybook illustrations of extravagant palaces and howling wildernesses, to be slotted in and out of the back of the theater, behind the cavorting characters. The scripts that came with them were as miniaturized as the stage, heavily abridged and censored for children’s ears and attention spans.

Despite the scripts, it’s easy to imagine how these stories would have expanded in the hands of the children who played with them—how the plots would zigzag, how the characters would migrate from one story to another, how scribbled additions would enrich the pre-drawn scenery. For instance, when Goethe’s son August put on shows in his paper theater, the family cat always served as one of the performers.

As another partisan of the miniature stage, G. K. Chesterton, wrote: “by reducing the scale of events it can introduce much larger events… Because it is small it could easily represent the Day of Judgement. Exactly in so far as it is limited, so far it could play easily with falling cities or with falling stars.” The magic of the paper theater was not that it allowed children to replicate a beloved play in their home; it was that it provided them with the raw materials either to copy or create, to follow or subvert, as they saw fit.

Perhaps this is why this short-lived children’s toy left such an enduring cultural legacy. Before Robert Louis Stevenson wrote Treasure Island, before Jean Cocteau directed his iconic, dreamlike Beauty and the Beast, before Wagner composed his Ring Cycle, they each acted out their big stories on these tiny stages. As the literary scholar Monica Cohens points out, Stevenson’s Treasure Island reads almost like a paper-theater drama writ large. Pirates were an unshakeable cliché of Victorian melodrama, and the grim tales of cruelty and violence that featured on the Victorian stage were brightened into candy colors in their miniature theater editions. Likewise, Stevenson’s dashing pirates come to us filtered through a sunny lens. “As a toy theater pirate,” Cohen writes, “Billy Bones is a copy of a copy.”

Remembering the shop where he purchased toy theaters in his youth, Skelt’s Juvenile Drama, Stevenson wrote: “Every sheet we fingered was another lightning glance into obscure, delicious story; it was like wallowing in the raw stuff of story-books. I know nothing to compare with it save now and then in dreams, when I am privileged to read in certain unwrit stories of adventure, from which I awake to find the world all vanity.” He continued, “What am I? what are life, art, letters, the world, but what my Skelt has made them? He stamped himself upon my immaturity. The world was plain before I knew him, a poor penny world; but soon it was all coloured with romance.”