The official newspaper of the Nation of Islam—published from 1960-1975—combined investigative journalism and Black Nationalist views on racial uplift. 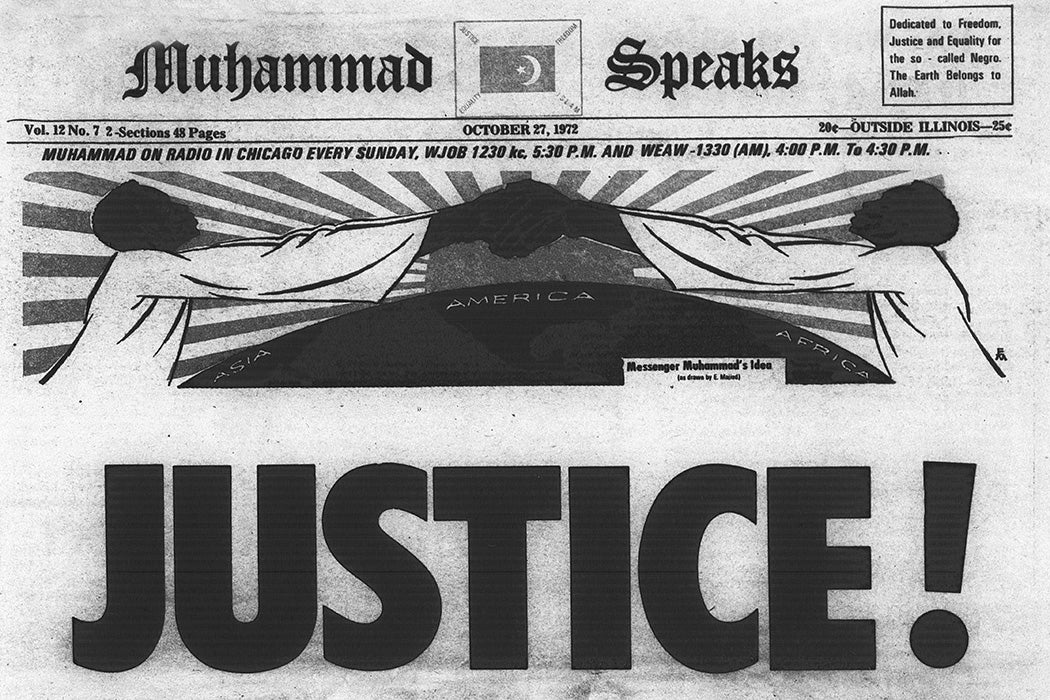 From the cover of Volume 12, Issue 7 of Muhammad Speaks
via JSTOR
By: Khuram Hussain
8 minutes
Share Tweet Email Print

During the late 1960s, Muhammad Speaks was the most widely-circulated Black-operated newspaper in the United States. While it is often associated with the fiery images and ominous messaging of its front covers, it was far more than a sensationalist tabloid. Its combination of community-oriented investigative journalism and Black Nationalist views on racial uplift made it a distinct voice in Black communities for news and commentary. It served as an important source of information for civic leaders, and grassroots organizers, like CORE and the NAACP, as well as those surveilling Black communities such as the FBI and the Ku Klux Klan.

In 1960, the National Minister of the Nation of Islam, Malcolm X, published the first edition of a Harlem-Based newspaper titled Mr. Muhammad Speaks. It was a tabloid-sized city paper dubbed a “militant monthly dedicated to Justice for the Black Man.” Malcolm X enlisted professional Black writers and journalists to gather news, write stories, and edit galley proofs. The paper printed the teachings of the Honorable Elijah Muhammad, the leader of the Nation of Islam, and covered major racial justice issues of the day, with an eye towards both domestic and international struggles against racism and colonialism.

In 1961, the paper moved to Chicago, shortened its name to Muhammad Speaks and began national circulation, as a weekly paper, with a larger staff of writers, editors, and illustrators. The paper stood out for its colorful language, striking illustrations, as well as its layout and quality of writing about Black communities. Male members of the Nation of Islam hawked the paper on bustling urban street corners, calling Black passersby to “come back to your own” and “read Muhammad Speaks.”

One of Muhammad Speaks’ most distinctive attributes was the juxtaposition of religious and secular content.

Aggressive street sales and a focus on Black communities made the paper a familiar feature in urban Black centers across the United States. Muhammad Speaks’ reporters established relationships with communities by obtaining local perspectives and following up on a story several weeks or months later. According to editor-in-chief Leon Forrest, journalists were “nourished and accredited” by Black communities, reporting on bad housing, rent strikes, tutorial programs, drug epidemics, and employing vets returning from Viet Nam. Such reporting earned the paper a reputation as a viable news source among community leaders such as mayors, city councilpersons, and grassroots organizers, such as local NAACP and Urban League offices. Hundreds of editorials attest to the reception of the paper’s news coverage. In a 1973 letter to the editor, college student Eugene Lassier offered his “sincerest felicitations” on the “splendid and informative newspaper” which Lassier described as an “education in itself.” The presence of local business advertisements further demonstrate the community relevance of the paper. Ads for a local jewelry repair shop in Chicago, a perfume shop in Cleveland, or a bakery in Harlem filled the advertisement pages. Hundreds of mom-and-pop Black businesses, in small and large cities, bought ad space in the national paper as though it were a local city paper, despite the fact that there were no city editions!

One of Muhammad Speaks’ most distinctive attributes was the juxtaposition of religious and secular content. The cover often depicted the image of Elijah Muhammad, the religious leader of the Nation of Islam, and its pages invariably featured religious content, including a centerfold dedicated to the speeches and teachings of Muhammad. Alongside these messages was coverage and commentary on domestic and international events by secular journalists and writers unaffiliated with the Nation of Islam. Editor-in-Chief John Woodford paralleled the approach of papers like the Christian Science Monitor that routinely include a designated space for religious messaging. Unlike the Monitor, however, the presence of religious exaltations were also present in Muhammad Speaks’ cartoons, editorials, and updates. This juxtaposition put on full display a diversity of viewpoints from Black Nationalists, progressives, and leftists.

The scope of ideas in Muhammad Speaks were colorfully depicted through illustrations. Virtually every edition of the nearly 700 issues of Muhammad Speaks included vivid and pointed political cartoons that analyzed current events from the point of view of Black Nationalists and progressives. The illustrations proved an effective medium for communicating leftist politics and Black Nationalist perspectives on domestic and international events. Created by professional graphic designers, illustrators, and artists the cartoons delivered a sophisticated visual commentary on every major stage of the Black freedom struggle of the1960s and 70s. From the struggle for civil rights, to Black protest against the war in Viet Nam, and the rise of African independence movements, Muhammad Speaks’ cartoons provided a distinct view of events impacting the lives of Black Americans. Eugen Majied’s original artwork, in particular, became iconic among depictions of the Black freedom struggle. From illustrations of the March on Washington to the trial of Muhammad Ali, Majied’s artwork continues to impact how we see and understand the civil rights era.

On October 24, 1975 Muhammad Speaks published its final issue, heralding Bilalian News as its successor. The renaming was part of a larger sea change in the Nation of Islam, following the death of Elijah Muhammad and the ascent of his son W.D. Muhammad to the helm of the Nation of Islam. While Bilalian News remained a community-oriented press that editorialized national events, its focus shifted towards faith-based activities and away from investigative journalism.

Throughout its 15-year run, Muhammad Speaks translated every stage of the Black freedom struggle through the ideals and aspirations of Black Americans who sought a way to freedom beyond the path of traditional civil rights activism. In the process they evoked controversy and highlighted the multiplicity of liberation struggles in Black communities.

Below are links, with annotations, to three specific issues of Muhammad Speaks during various political and cultural inflection points throughout the 1960s and 70s. The issues offer only a glimpse into the vastness of this archive of weekly newspapers that provide rich insight into the cultures and politics of the civil rights era.

As the civil rights movement captured national attention, Muhammad Speaks’ contributors questioned the court cases, marches, and sit-ins aimed to advance rights for Black Americans. The political cartooning of Eugene Majied was an important vehicle for expressing disaffection with the idea that structural racism could be dismantled through marching and civil disobedience. Two weeks ahead of the March on Washington, Majied’s 1963 cartoon satirized the organizers for conceding to the demands of the Kennedy administration and undermining the revolutionary aims of Black revolt. The public speeches of Malcolm X echoed this critique—dubbing it the ‘farce on Washington.’ In his public oratory, Malcolm X detailed the compromises made to satisfy state interests—including the removal of prominent Black voices from the roster of speakers. To support his public criticism of the March, Malcolm X displayed an enlarged version of Majied’s “Go Ahead, Demonstrate” illustration onstage.

On February 21, 1965 Malcolm X was assassinated while delivering a speech at the Audubon Ballroom in Harlem, NY. He had broken away from the Nation of Islam (NOI) in March of 1964, decrying his former organization and increasingly framing Black liberation in a transnational context. Throughout 1964, members of the NOI vilified him in Muhammad Speaks. The April 10th, 1964 issue of Muhammad Speaks illustrates the NOI’s hostility against Malcolm X. In the issue features a full-page story titled “Malcolm Exposed by His Brother” with Philbert X, comparing his blood brother to Judas and Benedict Arnold. The story includes a vivid drawing by artist Eugene Majied that depicts Malcolm X as horned and decapitated. On February 12th, 1965, nine days before Malcolm X was killed, Muhammad Speaks published a message from the leader of the Nation of Islam, Elijah Muhammad, who refers to Malcolm X and ominously asserts that “[m]any other such fools passed away in great dishonor and shame long before this chief hypocrite”. These excoriations of Malcolm X by the NOI are notable given contemporary research that documents involvement by the NOI in his assassination (See Payne & Payne 2020). Amidst growing evidence of NOI involvement in the murder, the Manhattan, New York District Attorney’s Office announced in February 2021, it is reviewing Malcolm X’s murder and whether the men convicted were responsible. The ongoing effort to better understand the life and death of Malcolm X, underscores the contemporary relevance of Muhammad Speaks’ issues during this time.

On October 13, 1970, activist and professor Angela Davis was arrested in connection with a shootout in a California courtroom. Her arrest and trial sparked a nationwide movement. Muhammad Speaks, as it often did with original reporting, covered her story from the point of arrest onward. The iconic photo of Davis printed on thousands of “Free Angela” posters, pins and shirts was snapped by a Muhammad Speaks photojournalist and journalist Joe Walker who interviewed Davis in prison. Walker taped the interview which was later featured on the talk show Like It Is on WABC TV in New York. The interview received national and international coverage and put Muhammad Speaks center stage at a flashpoint of the Black Power movement.  In a memoir, editor-in-chief John Woodford recalls that Muhammad Speaks spearheading a media campaign to defend Davis was a point of tension at the paper as some Black Nationalists that felt the papers’ leftist journalists might draw scrutiny and attention from the FBI, CIA, or rightwing groups.