In its plans for the conquest of Eastern Europe, the Third Reich looked to the example set in Africa by Fascist Italy. 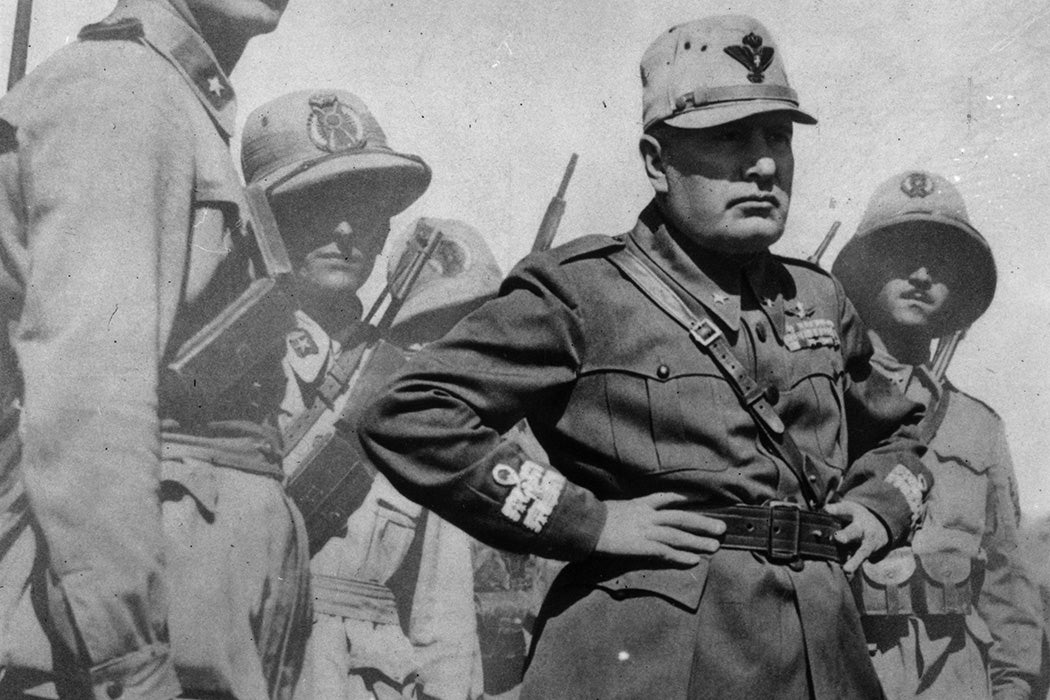 On October 29, 1922, as Benito Mussolini’s Black Shirt paramilitaries threatened to seize power in Rome, King Victor Emmanuel III appointed Mussolini as Prime Minister. It was a coup d’état that ushered in two decades of dictatorship and military disaster.

Mussolini’s was the first fascist party to come to power in Europe. The Partito Nazionale Fascista was a model for Adolf Hitler and the Nationalsozialistische Deutsche Arbeiterpartei: Hitler’s first attempt at seizing power came a year later in Munich. Although German Faschismus would outdistance Italian fascismo in ruthlessness and mass murder, the Italians were nevertheless the Germans’ first teachers, particularly when it came to colonialism. As historian Patrick Bernhard explains,

For Nazi Germany, Italian practices and experiences in colonial population management served as a model and “best practice” example, crucially informing German plans for the settling and ethnic remaking of Eastern Europe.

Bernhard notes that histories of the Axis have tended to concentrate on the failures of the alliance, riven as it was by “deep-seated nationalist and racial resentments.” But Italian colonialism was something else. Before Mussolini, Italy had established colonies in Eritrea (1882), Somalia (1889), and two provinces of Libya (1911). The fascist regime, however, envisioned a new form of “settler colonialism that was totally directed from above and which foresaw the transfer of millions of colonists.”

From the fascist take-over to 1931, Italy waged “an extremely brutal colonial war” in North Africa, killing an estimated 10 percent of Libya’s population as it reasserted Italian control there. Abyssinia was similarly reduced by a brutal war in 1936.

Some 20,000 colonists were sent to Libya in 1938 to great fanfare, accompanied by the German Labor Attaché.

Millions of Italians were supposed to colonize these African possessions. Geologists, agronomists, and ethnologists preceded them to find ideal locations for towns and farms. Some 20,000 colonists were sent to Libya in 1938 to great fanfare, accompanied by the German Labor Attaché. Forty towns on strict grid patterns, with social and party centers, were laid out. Each family had everything it needed to start a new life, provided with “a modern and completely standardized house with running water, furniture, workhorses, and food supplies for the first weeks.”

By 1940, there were 40,000 colonialists. “Life and work in these settler towns had more features of totalitarianism than in the Italian mainland,” writes Bernhard. In 1943, when Britain and France took control of Italy’s Libyan colonies, there were 150,000 Italians in North Africa.

“Colonial scientists” drew up plans for a “demographic colonization.” Settlement policy was to increase Italy’s birth rate and put a stop to the rural exodus to cities in Italy itself. The plan was nakedly eugenic: it was supposed to “improve” the Italian population, creating “a new breed of Italian,” the New Man of Fascism: an army of “soldier-peasants” who would expand and defend the Empire through Egypt, Sudan, and the Horn of Africa. Italians from various parts of the peninsula would mix, breaking the traditional identifications (and enmities) of Italy’s regions.

Fascist propaganda about the Libyan project hooked some British and American commentators, but it was the Nazis that were really enraptured. Africa italiana and the permanent mobilization of the Italian population came to serve “as a prism through with the Germans entertained their own visions of empire” in eastern Europe. Heinrich Himmler, Rudolf Hess, Robert Ley, and Herman Göring all visited North Africa before the formal beginning of the Second World War in 1939.

Of course, the Nazi settlement of “Aryans” in the Ost never happened. The invasion of the Soviet Union—which cost Italy some 84,000 dead—was defeated at Stalingrad in early 1943. Only the preliminary act of the Lebensraum fantasy to reshape an entire continent’s population, the extermination of Jews and others considered undesirable, had gotten underway before the Nazis were defeated in 1945.

Although Nazi colonization plans came to nothing, Germans whose ancestors had migrated east beginning in the reign of the Holy Roman Empire, centuries before the Nazi madness, paid a great price for it. At least twelve million ethnic Germans were expelled from, or fled, eastern and central Europe between 1944–1950.

Hitler’s Africa in the East: Italian Colonialism as a Model for German Planning in Eastern Europe
By: Patrick Bernhard
Journal of Contemporary History, Vol. 51, No. 1, Special Section: The Dark Side of Transnationalism (January 2016), pp. 61–90
Sage Publications, Inc.