Is It Really Carnival if You’re Not Drunk?

Carnival is known for overturning the rules of society for a short time. But strangely, many scholars don’t discuss what a big role alcohol plays in it. 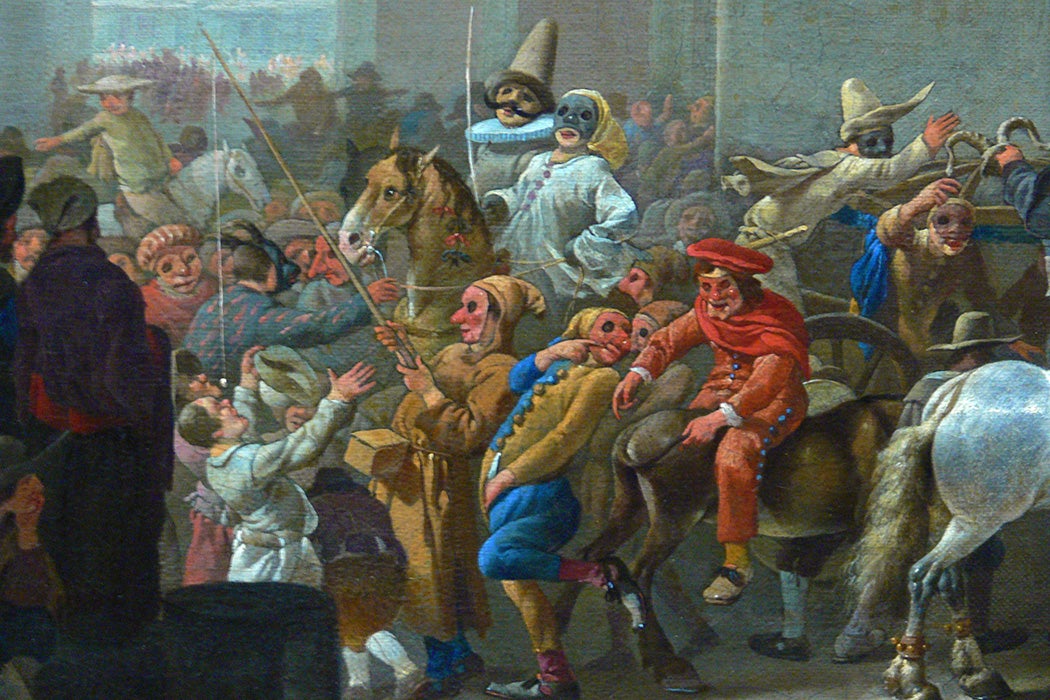 Ash Wednesday is the start of the Lenten season of fasting and somber prayer for many Christians. But before that comes Carnival—or, depending where you are, Mardi Gras—a time of wild abandon. Carnival celebrations include not just Fat Tuesday but also a range of other traditions, from Saturnalia in ancient Rome to Purim in the Caribbean. They overturn hierarchies and rules that govern society at other times, giving license to rowdiness, sex, and blasphemy. English scholar Marty Roth writes that this idea of carnival, and its legacy in “carnivalesque” literature, is much discussed in modern academic literature. But, he argues, these analyses often gloss over a key part of these celebrations: the heavy use of drugs, most notably alcohol.

Roth writes that first-century Assyrian writer Lucian of Samosata described drinking as obligatory during carnival festivals. Lucian reported that at one point “Demetriums the Platonic was reported to Ptolemy for a water drinker, and for the only man who had declined to put on female attire at the Dionysia.”

“These are Times dedicated to Drinking, and all the irregularities that attend the Wanton Fumes inspired by the God of Wine.”

In 1700, writer Thomas Brown argued that all European societies had some sort of carnival. “These are Times dedicated to Drinking, and all the irregularities that attend the Wanton Fumes inspired by the God of Wine,” he wrote.

And yet, Roth writes, twentieth-century accounts of carnival often virtually ignored the role of alcohol or other drugs. Academic work on carnival in ancient Rome and modern South America, as well as carnival-like cultural developments, tend to downplay literal intoxication in favor of a focus on political disruption. For example, in a book on carnival, Robert Stam wrote that “in the United States the sixties were the privileged era of carnivalized politics, when demonstrations incorporated colorful elements of music, dance, costume and guerrilla theater.” He doesn’t mention the significance of drugs to that political and cultural moment.

Likewise, Roth writes that philosopher Mikhail Bakhtin’s concept of the “carnivalesque” in literature focuses on chaos, sex, grotesque bodies, and excessive feasting, but not on heavy drinking. For example, Bakhtin claims that French Renaissance satirist François Rabelais used the imagery of drinking to represent truth—in vino veritas. But Roth suggests that Rabelais actually very often used drinking to represent drinking. For example, he wrote of soldiers who “drank so much and so much that they fell asleep like hogs, in disorderly fashion all about the camp.”

Roth suggests that academics may drain the wine from the meaning of carnivalesque out of a belief that “while creative states may resemble states of intoxication, artists may not make art out of their alcoholic or narcotic imaginaries.”

For many critics and social scientists, blasphemy, sex festivals, and political rebellion may be all very well, but celebrating drunkenness for its own sake seems to be a step too far.

Carnival, Creativity, and the Sublimation of Drunkenness
By: MARTY ROTH
Mosaic: An Interdisciplinary Critical Journal, Vol. 30, No. 2 (June 1997), pp. 1-18
University of Manitoba