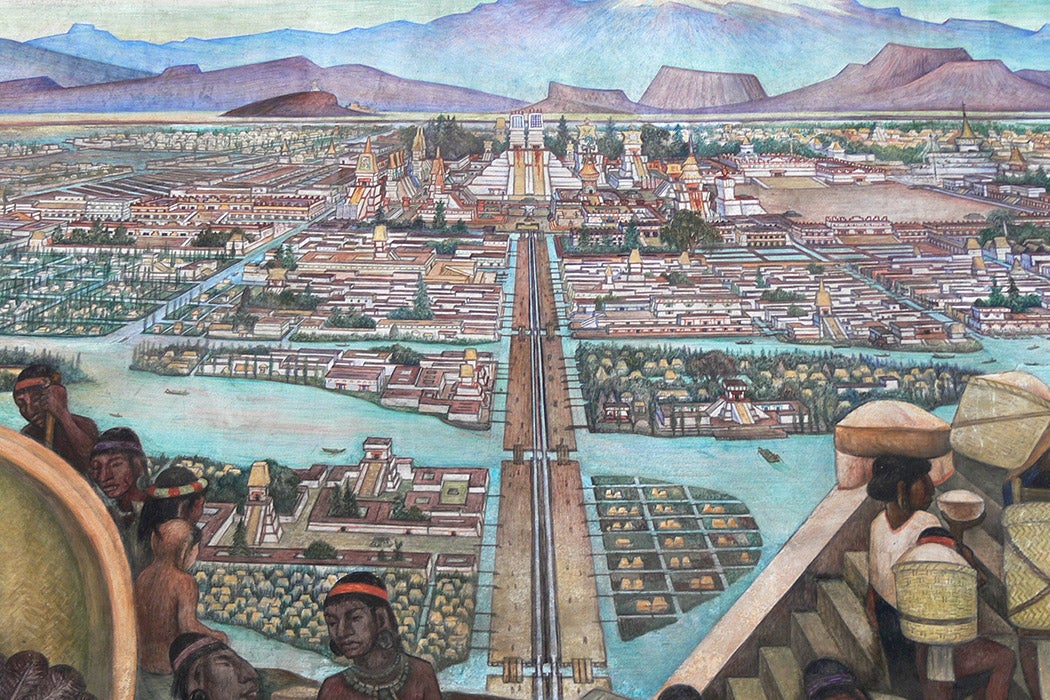 Mural by Diego Rivera of the Aztec city of Tenochtitlan and life in Aztec times, 1945
via Wikimedia Commons
By: Matthew Wills
2 minutes
Share Tweet Email Print

The Chicano movement of the 1960s and 1970s was a struggle for Mexican-American civil rights. As scholar Lourdes Alberto writes, El Movimiento sought to address “poor educational and health access, impoverished living conditions, and exploitative labor practices in the Unites States.” This wasn’t just about bettering lives through political engagement in a country where people of Mexican ancestry were treated as second-class citizens. A cultural renaissance was integral to this self-determination effort, one that celebrated Indigenous ancestry and pre-Columbian aesthetics.

According to Alberto, “[t]he continued presence of Aztec history, culture, and iconography since El Movimiento through the new millennium reveals the centrality of indigeneity in constructing political identity for Chicanos and Chicanas.”

Indigenismo was thus a political and cultural strategy of European-descended elites and intellectuals.

Mesoamerican history, Alberto writes, was “crucial in engendering Chicano political thought and identity.” But this usable history was selective. In fact, it was filtered through indigenismo, the ideology behind Mexico’s state-building process in the post-revolutionary period of the 1920s.

Alberto argues that Mexican nationalism was the product of a Creole elite who focused “on Indians as a unique Mexican natural resource that could be manipulated to remake Mexico into a nation with its own cultural and political trajectory.” Indigenismo was thus a political and cultural strategy of European-descended elites and intellectuals who “facilitated the formation of a modern Mexican nation by creating a myth of origin through the selective incorporation of indigenous history.” Still, it did so “while at the same time excluding actual indigenous people through assimilation programs and land dispossession.”

“Indigenismo ultimately ensured the disappearance of contemporary indigenous populations, as they were no longer seen as a part of Mexico’s present and future[,]” Alberto writes; “rather, they were frozen in an ancient past symbolizing Mexico’s raw ethnic roots.”

Calling out this colonialist legacy of indigenismo, Alberto questions why Chicanos re-invoked the very “Mexican indigenist aesthetic that had been largely responsible for dismantling indigenous culture and society” in the first place:

Because the apparatus of indigenism remains a threat to indigenous culture, indigenous history, indigenous epistemologies, and indigenous self-determination, by adopting indigenist poetics, Chicanos’ and Chicanas’ uses of indigeneity is viewed as an extension of colonial practice.

But rather than create “a simple binary between Chicana/o and native peoples,” Alberto explores “the cross-border forms of indigenism in Chicano and Mexican cultures to understand the uneven legacies of colonization.” A scholar who identifies as an indigenous Zapotec in diaspora, “situated between Chicano and Mexican indigenisms,” Alberto asks how and if the Chicano/a version of indigenismo can be transmuted into resistance against colonial and neocolonial structures of history.