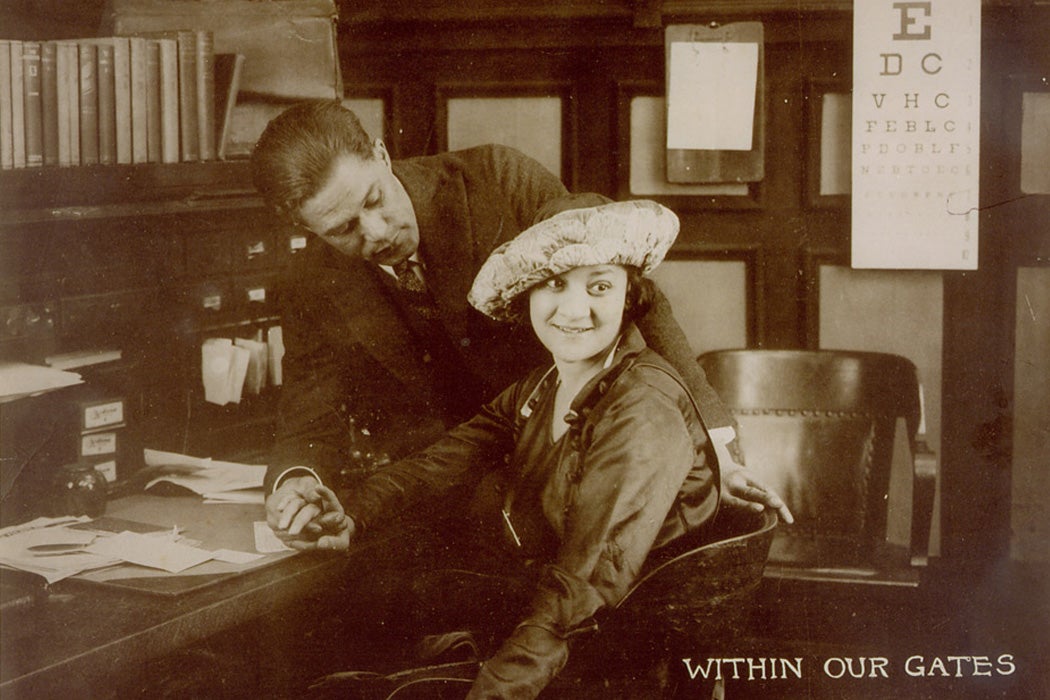 When the filmmaker Oscar Micheaux was born in 1884, in rural Illinois, movies barely existed. Micheaux was the son of former slaves. By the time he left home, at the age of 17, movies had progressed far beyond Eadweard Muybridge’s galloping horses. Audiences were packing vaudeville houses to see the latest moving pictures, and Micheaux wanted to be a part of the emerging industry.

He would start making his own films in 1919, though they were fairly different from the mainstream fare coming out of the new Hollywood studios. Micheaux’s movies featured predominantly black casts, playing characters who pushed back against the cruel caricatures of black Americans seen in popular films like The Birth of a Nation. Working out of his own independent company on a shoestring budget, Micheaux gave his characters a dignity and humanity that was rarely seen on screens at the time. He presented an unflinching look at the legacy of white supremacy in America with his famous—and, at the time, controversial—film Within Our Gates.

Micheaux’s work belonged to a category of movies simply known as “race films.” Made roughly between the late 1910s and late 1940s, these films were made for black audiences, by black filmmakers and actors. They hit their peak in the 1920s, when more than 30 companies were making race films, and tackled issues specific to their audience. These included “the politics of skin color within the black community, gender differences, class differences, [and] regional differences especially during this period of the Great Migration,” according to film professor and TCM host Jacqueline Stewart.

Certain race films resembled the middle-class melodramas that are commonly associated with “classic” Hollywood today. That was part of what made them so revolutionary: they placed black characters in the same situations as white stars like Mary Pickford or Greta Garbo. They also offered an alternative to the racist stock characters that had become the default roles for black actors in the studio system. These roles, the film scholar Richard Grupenhoff notes, included “the shiftless fool, the brute, the comic female pickaninny, the faithful servant, the unfortunate servant, and the wise old mammy.” These stereotypes, Grupenhoff argues, reflected prevailing assumptions among white society that black Americans were less intelligent, less self-sufficient, or less human.

“You have Birth of a Nation, which is very successful, and you go, okay, America loves racism. They will pay money to see racism on screen.”

One of the worst offenders in this regard was, of course, The Birth of a Nation, D.W. Griffith’s racist revisionist history of the Civil War and Reconstruction era. The film notoriously portrayed the Ku Klux Klan as crusading heroes, defending the virtue of white women against black sexual predators (who were played by white actors in blackface). The Birth of a Nation is often credited with reviving the KKK, and was linked to several instances of violence against black communities following its 1915 release. Sensing its awful potential, activists, most notably William M. Trotter, tried to get the movie banned, but to no avail. The Birth of a Nation was a hit.

“The most dangerous thing about Birth of a Nation was its huge financial success,” filmmaker Reginald Hudlin says in Birth of a Movement, the PBS documentary about the Trotter’s campaign. “Because at the end of the day, Hollywood works on precedent. Whether people know better or not, they’re going to go back to tropes that they feel are associated with success. You have Birth of a Nation, which is very successful, and you go, okay, America loves racism. They will pay money to see racism on screen.”

Race films were an attempt to balance this bigotry. Grupenhoff writes that civil rights leaders like W.E.B. Du Bois came to advocate “not for blacks to condemn [The Birth of a Nation’s] shortcomings, but rather to create a film aesthetic of their own.” If the major studios weren’t going to take their concerns seriously, they would make the movies they wanted to see themselves. “White discrimination was, paradoxically, one of the causes for the rise of independent black filmmaking,” Grupenhoff writes.

Micheaux wrote, directed, and produced approximately 40 features over the course of three decades.

Micheaux was one of the most prolific filmmakers to respond to this call. He wrote, directed, and produced approximately 40 features over the course of three decades. His first film, made with the black production company Lincoln Motion Picture Company, was an adaptation of his semi-autobiographical novel The Homesteader. But his second film, Within Our Gates, engaged with The Birth of a Nation quite directly. This is most noticeable in an extended flashback sequence, which sees the movie’s heroine, a black schoolteacher named Sylvia, running from an angry white mob. They are mistakenly convinced her adoptive father Jasper Landry, a poor black man, killed his rich white landlord. In retribution, they lynch both Landry and his wife, and nearly murder their young son Emil. (He escapes, with a bullet wound.) While all this is happening, the landlord’s brother finds Sylvia and attempts to rape her… before realizing she is his biracial daughter.

This sequence offers a more accurate version of American history, casting innocent black families as the victims of senseless violence from racist mobs and black women as the targets of sexual assault (rather than suggesting that white damsels were the real victims of Reconstruction). As the film scholar Anna Siomopoulos notes, Micheaux even “counters The Birth of a Nation in the politics of its aesthetics,” by using editing techniques parallel to those that Griffith employed in his film, offering much more than “a very simple opposition between white virtue and black villainy.”

Unlike The Birth of a Nation, Within Our Gates was banned or censored in some cities over fears of racial unrest. It was also, for many decades, considered a “lost” film—one of the many silent movies that were carelessly destroyed or left to languish in an unknown storage unit. But a single print was later found in Spain, and preserved by the Library of Congress in 1993. According to the LOC, Within Our Gates is now considered “the earliest known surviving feature directed by an African American,” making it, by extension, one of the oldest surviving rebuttals to the racism of Griffith’s film.

THE REDISCOVERY OF OSCAR MICHEAUX, BLACK FILM PIONEER
By: RICHARD GRUPENHOFF
Journal of Film and Video, Vol. 40, No. 1 (Winter 1988), pp. 40-48
University of Illinois Press on behalf of the University Film & Video Association
The Birth of a Black Cinema: "Race, Reception, and Oscar Micheaux's" Within Our Gates
By: ANNA SIOMOPOULOS
The Moving Image: The Journal of the Association of Moving Image Archivists, Vol. 6, No. 2 (FALL 2006), pp. 111-118
University of Minnesota Press