The cinema in 1980s Ghana was DIY. So were the movie posters, now the subject of an exhibition at the Poster House in New York City. The cinema in 1980s Ghana was DIY: vans traveled from town to town with generators to power a VCR and a TV or maybe a projector. The titles were Hollywood imports on PAL and VHS tapes. As these independent “video clubs” operated far outside official distribution, area artists made the promotional posters, painting interpretations of box art or the storyline—usually with a dose of imagination—on flour sacks. As the religious studies scholar Birgit Meyer writes in Africa Today, before this era, when the government loosened its control of media “visiting the cinema had been largely limited to the elites and upper middle classes in the cities, and virtually the only films accessible to ordinary people had been the Government Information Services’ information films and mission societies’ biblical stories.”

The films channeled local beliefs in promoting a new wave of film-watching.

Often the foreign films were screened in open-air churches and the brightly colored posters made to sell tickets were infused with Pentecostal beliefs, even as they went heavy on the action and gore. “Baptized By Beefcake: The Golden Age of Hand-Painted Movie Posters from Ghana,” a new exhibition at the Poster House in New York City, explores this fusion of the spiritual with pop culture through the work of 22 artists from the 1980s and 90s. From the Terminator as a Christ figure in the battle between good and evil to a version of Evil Dead 2 that strays far from the source material to embody the dangers of the spirit world evoked by Pentecostal sermons, the films channeled local beliefs in promoting a new wave of film-watching. 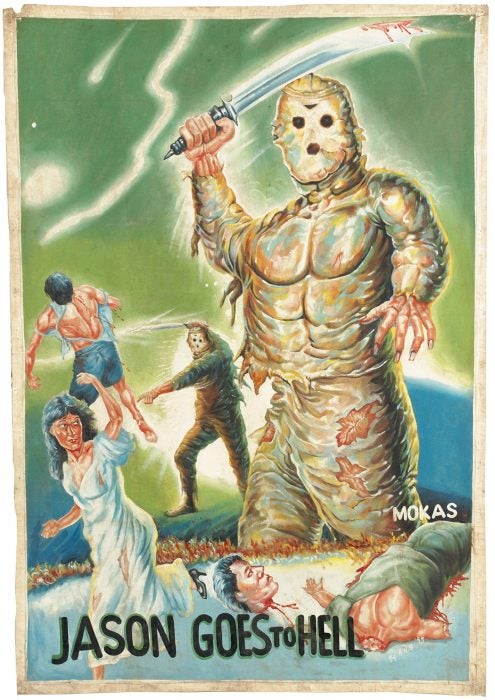 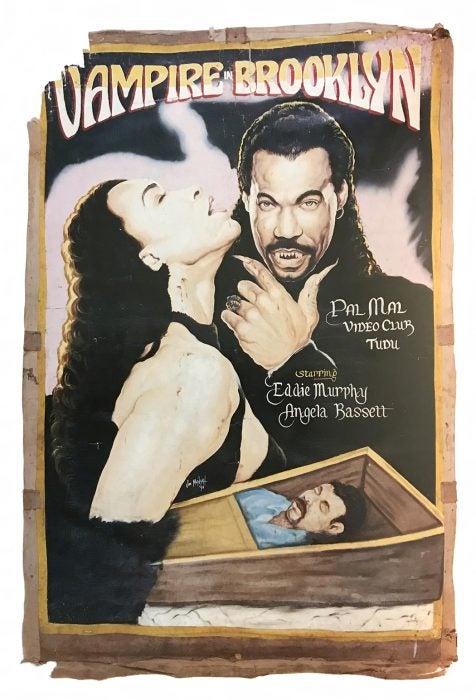 Vampire in Brooklyn, 1996 by Joe Mensah via Ernie Wolfe Gallery 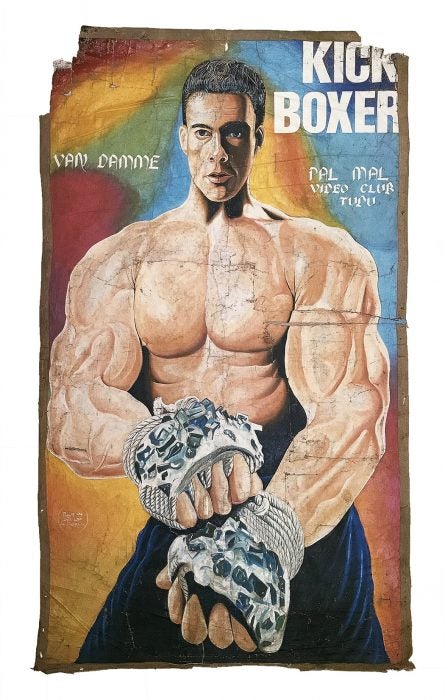 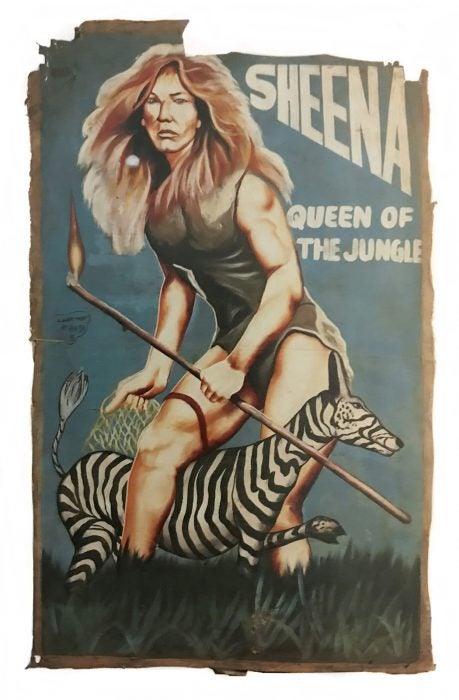 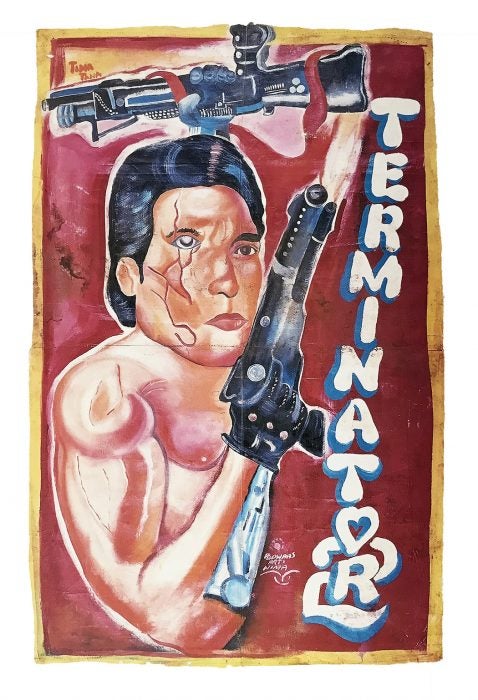 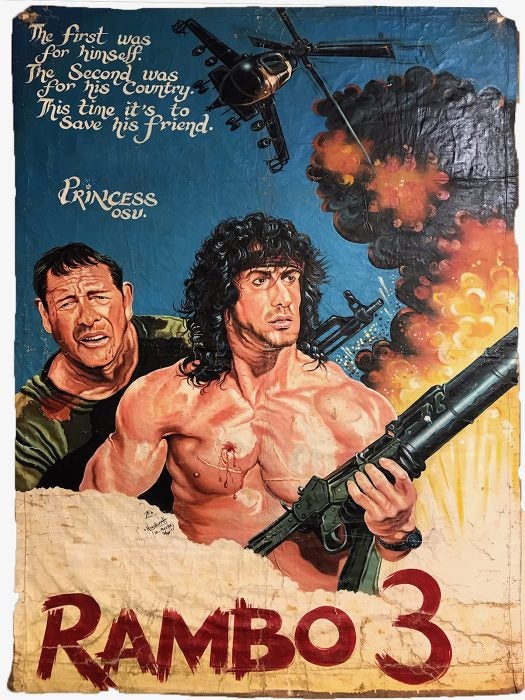 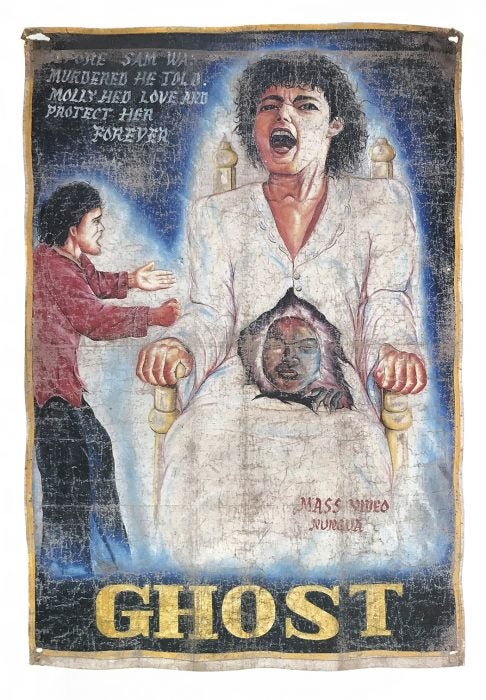 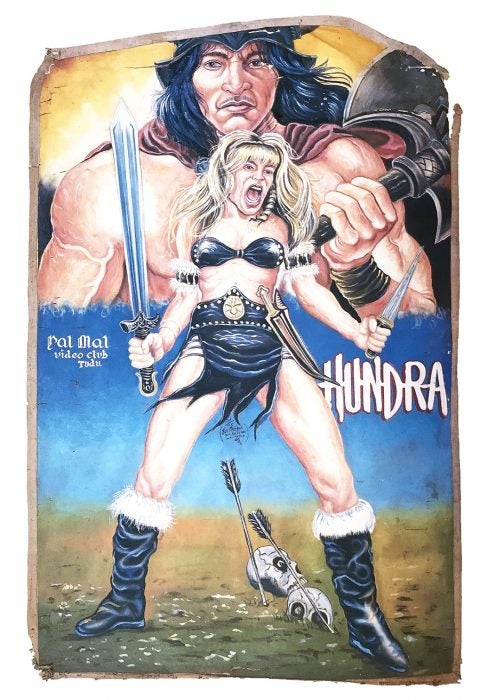 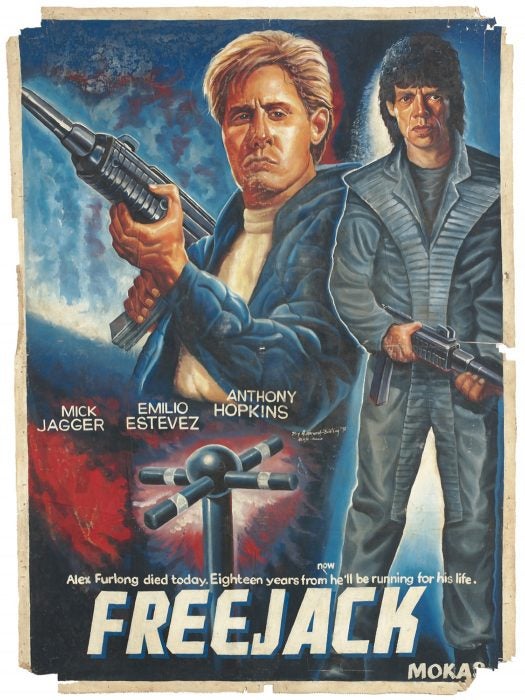 Many of the posters in Baptized By Beefcake are well worn, bearing mends from years of regular use, when they were rolled up to tour with the mobile cinemas. The mermaid’s face on the poster for the 1984 movie Splash is almost obliterated, possibly by the touch of hands, extended in reverence for the image as a figure in indigenous belief. In an article for Method & Theory in the Study of Religion, Meyer described commissioning a painting of Mami Water, a demonic water spirit, in 1996, that reveals how the culture of film blurred with religion. Meyer writes:

Obviously inspired by the Hollywood movie Splash, the mermaid is a white topless woman with a red fishtail, relaxing on the beach. The use of this motif to picture Mami Water, a much talked-about spirit held to exist at the bottom of the ocean, testifies to the openness of the popular imagination to incorporating and appropriating foreign visual materials, as they circulate through Hollywood or Bollywood movies.

Other visual choices are harder to understand, such as a giant fish looming alongside James Bond’s futuristic car for The Spy Who Loved Me, while many show artists striving for excitement beyond what appears on screen, like King Kong surrounded by flames and ripping a body apart with his hands. One for the Captain America TV movie transports its narrative to Ghana, making its hero a black man with a real place of evil—a slave castle—visible in the background.

Frequently the film poster artists came from the prolific sign painting industry, which similarly brought international pop culture to local themes. The historian Christine Kristen recounted in an article for African Arts how, during her travels to Ghana in 1978, she witnessed a proliferation of hand-painted signs adorning bars, stores, and restaurants. “I began photographing the signs, and was delighted by the variety of subject matter and personal styles,” Kristen writes. “The imagery is a dynamic combination of local subjects and themes derived from kung-fu movies and Western sources like cowboy films, American record album covers, and American magazines including Ebony, Jet, and International Newsweek.”

Eventually, the hand-painted posters were replaced with printed materials, yet not before they caught the eye of foreign collectors, including Ernie Wolfe III, who co-curated the Poster House exhibition. Wolfe explained the decline of the posters as utilitarian objects and their rise as collector’s items to the art historian Donald Cosentino in African Arts:

“They would literally cut up old posters and make them into patches for new ones. The entire enterprise was one big recycle. That tradition died in the late ’90s. Put out of business by chalkboards and cheap off-set printing. And then totally slammed by computers. By 2000, a new generation of young painters was making posters again, not only as advertisements, but also as free-standing art commodities.”

Still, Wolfe adds, many of the artists “paint out of the depth of their religious beliefs.” Whether capturing the rage of Rambo as an expression of righteousness or reflecting on tales of vengeful ghosts for the film Ghost, these posters transformed Hollywood into something distinctly Ghanaian. 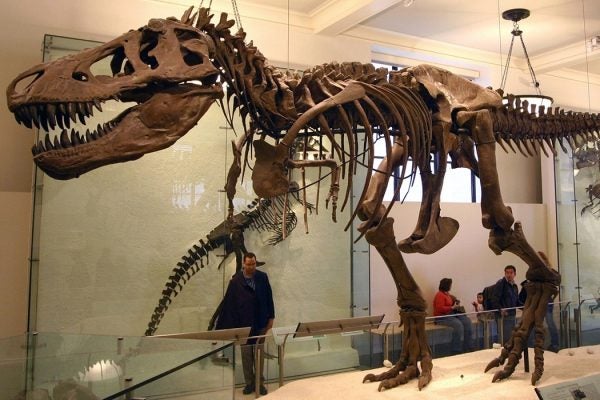 What killed the dinosaurs? An asteroid wiped them out, right? New research suggests that even before that cataclysm, dinosaurs weren't doing so well.