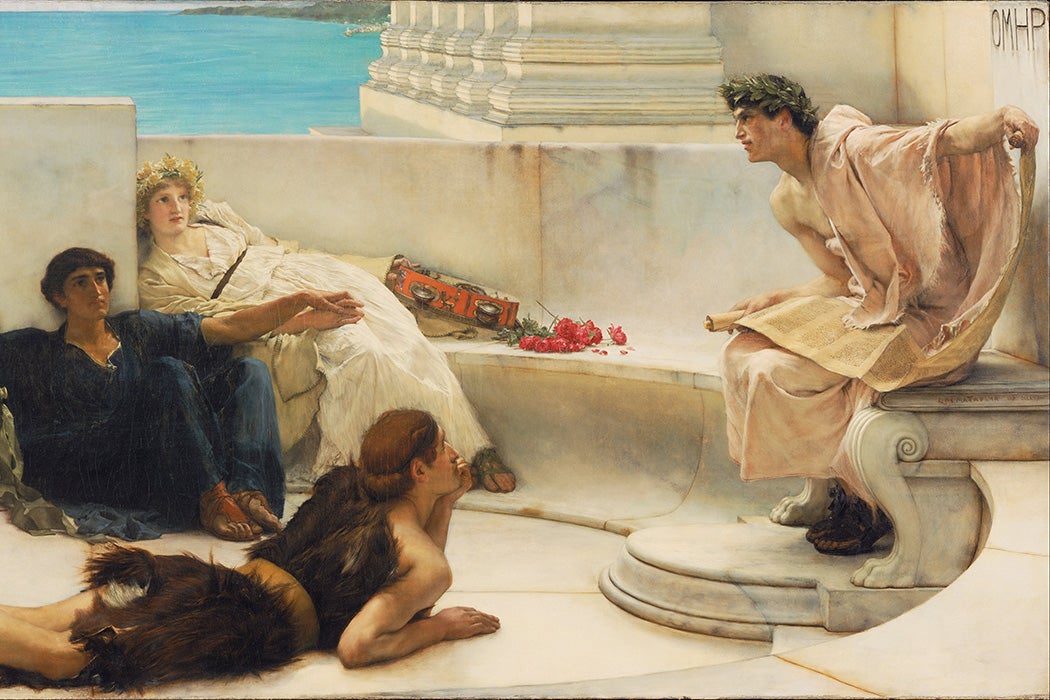 Who was Homer? Or, to put it another way, who wrote Homer? The identity of the Greek poet was a big question among nineteenth-century scholars. The Analysts (yes, they had a name) thought that multiple authors made up “Homer.” The Unitarians (not the religion), meanwhile, thought Homer was a single, masterful poet. The notion that long and involved poems like the Iliad and the Odyssey might have been recited by pre-literate peoples before being committed to writing was too fantastical a notion to be believed. How could anybody remember so many lines of poetry?

Enter Milman Parry, who burst on the scene in the late 1920s and became a professor at Harvard University in 1929. Parry used textual analysis, anthropology, and field work to show that pre-literate or semi-literate peoples could, in fact, recite long poems. Inspired by the Slavicist Matija Murko, who attended his thesis defense at the Sorbonne, Parry headed to the hills of what is now called Bosnia in the early 1930s. There he used aluminum disks to record pre-literate bards, guslari, who performed epske pjesme, epic oral songs. These bards used “the very same kinds of structures and patterns that Parry had found in the texts of Homer,” according to the late oral-communications scholar John Miles Foley.

“Milman Parry portrayed [the Iliad and the Odyssey] as the products of a generations-long process of composition in performance.”

“Instead of construing the Iliad and the Odyssey as either conventionally authored works or pieced-together editions, Milman Parry portrayed them as the products of a generations-long process of composition in performance,” Foley wrote. This helped revolutionize the way we understand the oral origins of epic poetry. Here’s Parry in his own words on the use of formulaic verse by Homer and the guslari. As Foley put it succinctly, “These guslari composed their epic poetry Homerically.”

Parry died tragically in 1935, cutting short a brilliant career at the age of thirty-three. His work was carried on and expanded by his graduate student, Albert Lord, who could only get back to Yugoslavia after the end of World War II. The Parry/Lord “Oral Theory” about the origins of the Iliad and the Odyssey is now accepted by most everyone, wrote Foley, and is applied to “more than 150 different oral traditions from six of the seven continents and from ancient times through the modern day.”

Parry’s acoustic recordings make up a “half-ton of epic,” as Albert Lord described them, and they’re now held in the Milman Parry Collection of Oral Literature at Harvard. By setting to work when he did, Parry’s timing was extraordinary. Recording equipment had become portable enough. And the guslari still existed.

But Parry’s untimely death from a gunshot wound seems to have sparked all sorts of urban legends—or what you might call oral traditions. Parry, in fact, had carried a gun in the rough terrain of Yugoslavia and took the weapon with him on a family trip to California. It evidently went off by accident while he was unpacking. That “evidently” has been the basis of much rumor since.

Classics professor Steve Reece explores the shooting and the mythology about Parry that arose in subsequent years. He’s been described as a working-class hero/chicken farmer who ran up against Harvard snobbery and killed himself in despair when he wasn’t given tenure. He was compared to Alexander the Great (also dead at thirty-three);  T.  E. Lawrence, who died in a senseless road accident just months before Parry; and even to Ajax, who “killed himself out of anger and dismay over not receiving the armor of Achilles.” Reece goes to the documentation to meticulously deconstruct the Parry-myths in the context of the fluidity of oral traditions. Though saturated in corporate narratives and televisual plots, we evidently still make up songs about heroes.

Nintendo's Mario and Homer's Odysseus have more in common than you might think.