Apartheid policies that segregated sports in South Africa were challenged by its own athletes, as well as internationally. 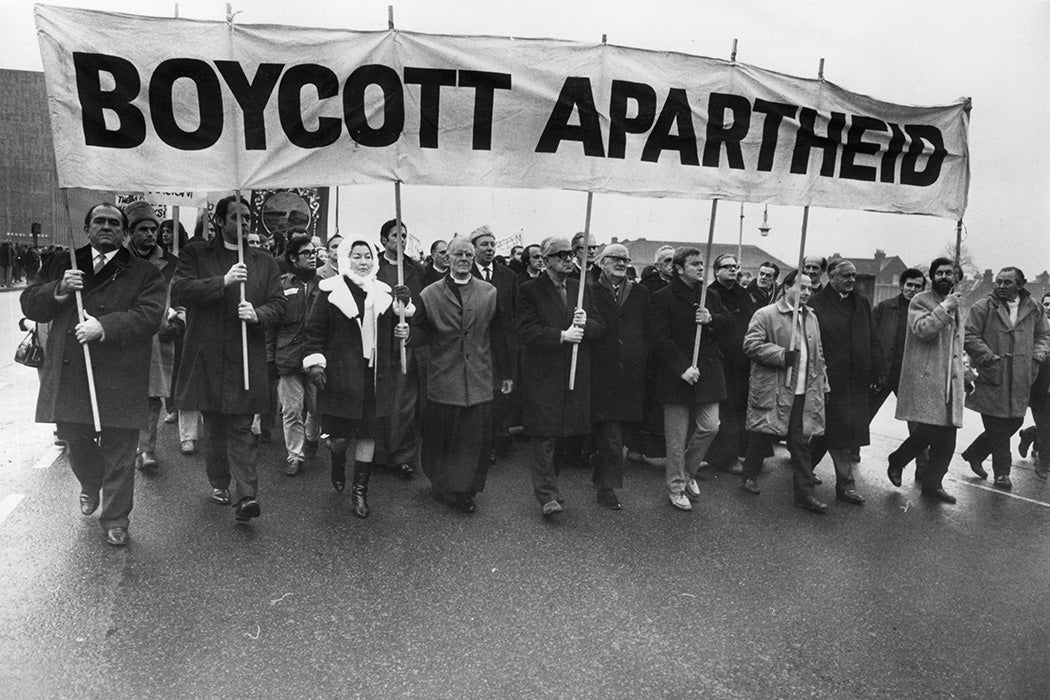 The choice of Beijing as the host of this year’s Winter Olympics has raised questions about participating in sporting events connected with a nation that perpetrates human rights abuses. As sports historian Douglas Booth writes, these questions were on the minds of many people, both within and outside of South Africa, during the decades of apartheid.

Through the 1960s, Booth writes, South Africa kept its sports segregated, with officials there arguing that mixed-race events would exacerbate “racial tensions.” National sports were divided into African, Coloured, Indian, and white associations.

Pushes to integrate sports came from both inside and outside the country. On the international stage, Eastern bloc and global South nations led the fight. In 1964, the Olympics barred South Africa from participating due to apartheid. In 1968, the country tried again, preparing racially mixed teams for the international games but without changing the underlying sports systems within the country. Olympic officials initially agreed to let South Africa participate, but withdrew the invitation after a threatened boycott by other African nations.

Meanwhile, Booth writes, other nations began pushing back against South African policies when they were directed against their own players. For example, through 1960, the New Zealand Rugby Football Union kept Māori players home when its teams toured South Africa. But in 1967, domestic protests against this policy caused the Union to cancel a tour there. The next year, South Africa allowed Māori players to come.

As international pressures mounted, South African officials began discussing racially mixed sports as a solution to conflict rather than a cause of it. Through the 1970s, the nation’s sports gradually integrated. Black athletes began wearing the Springbok, a symbol of several sports teams and of the white-dominated nation. This was a symbolic acknowledgement of their status as members of the nation previously denied to Black people, even though it meant little in terms of actual citizenship rights.

But, Booth writes, some activists within the South African sports world became disillusioned with the desegregation of sports, instead viewing the full abolition of apartheid as the only appropriate goal of their movement. Hassan Howa, president of the South African Council on Sport (SACOS), explained that he gradually came to question work he’d done to integrate cricket.

“People come to me and say what you fought for has arrived, why aren’t you satisfied,” he said. “I can’t be satisfied if I was fighting for the wrong things.”

Under the slogan “no normal sport in an abnormal society,” SACOS embraced the strategy of non-collaboration with institutions sponsored by the apartheid regime. Other organizations, such as the National Sports Congress (NSC), formed in 1989, continued the push for the desegregation of state-affiliated sports institutions, with the goal of building structures of a “non-racial” South Africa even within the apartheid state.

Ultimately, it’s hard to know how much sports boycotts and related pressures contributed to ending apartheid in the 1990s. But Booth argues that the long-term campaigns to integrate sports played a significant role in changing South Africa’s culture, helping to pave the way for political equality.