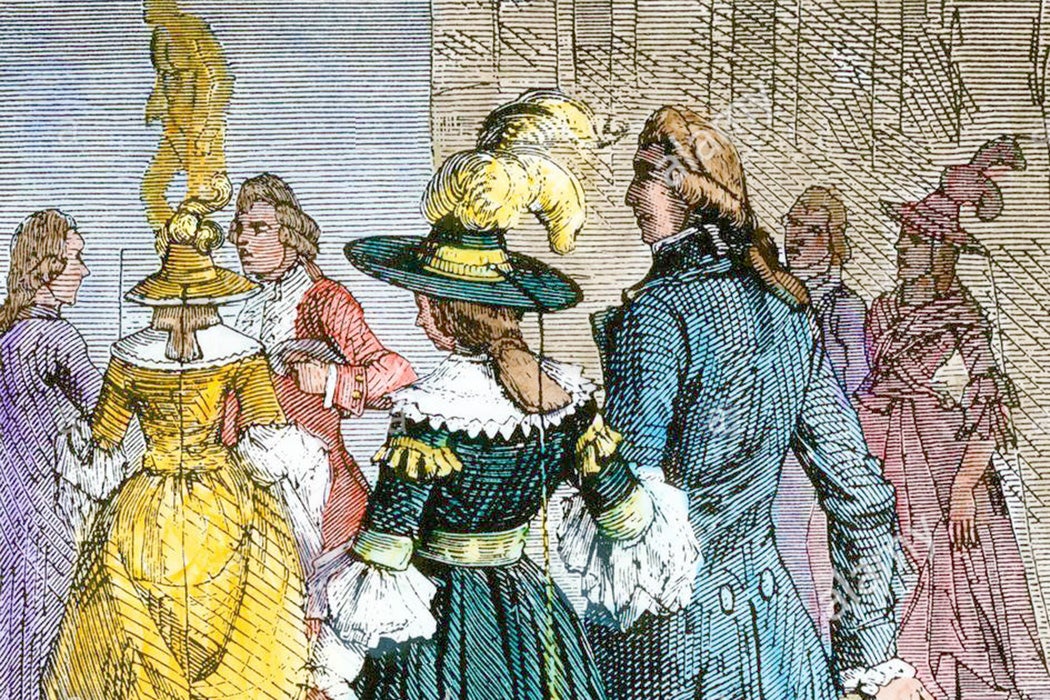 “Could one believe that a lady’s finger, that her whalebone petticoat, should send forth flashes of true lightening, and that such charming lips could set on fire a house?”

These were the enthusiastic words of Gentleman’s Quarterly, circa 1745. The author had witnessed an Electrical Venus, a demonstration of the latest discoveries in harnessing and discharging electricity. Somewhere between a parlor trick and a scientific experiment, the performance started by imbuing a woman with a charge of friction, then inviting an audience member to come and kiss her. In the instant before they could touch, a spark darting from her lips would rebuff the kiss.

Electrical experimenter Jean-Antoine Nollet lined up 180 soldiers and ran a shock through them, sending all jumping up into the air at once.

This was just one of many early electrical experiments-cum-parlor tricks that resided in a strange zone between the scientific and the marvelous. As Paola Bertucci writes,

Spectacular electrical soirees were frequently hosted in the darkened salons of aristocratic palaces where amazed spectators would see their hair rise, their silver-embroidered clothes glitter and their gold buttons spark, and other amusing effects of the electric fire.

Guests set spirits ablaze with electrified swords and watched as halos ignited around their heads. On one particularly memorable occasion, electrical experimenter Jean-Antoine Nollet lined up 180 soldiers and ran a shock through them, sending all jumping up into the air at once.

According to the popular science writer Louis Figueir, all the excitement about the new knowledge of electricity led to an odd trend: in his recounting, Paris in the 1770s saw a fad for ladies’ lightning-rod caps, trimmed with metallic thread connecting to a cord that dragged along the ground. The (extremely flawed) theory was that the cord would carry a lightning bolt harmlessly away from the wearer. He also writes of a lightning-rod umbrella proposed by one of Ben Franklin’s acolytes, Jacques Barbeu-Dubourg. The umbrella would be surmounted with a metal pole and trail a silver braid to bear away the charge.

These scantily documented oddities aside, electrical fashion only really took off in the mid-1800s, with the advent of miniaturized batteries. Gustave Trouvé, inventor of the pocket battery, wasted no time putting his creation to use in electrically powered jewelry. At the 1867 Paris Exposition, he presented an array of pins surmounted by battery-driven miniatures: tiny rabbits beating drums, glowing lanterns, and birds that flapped their wings and fanned their tails. The sole surviving example of his work is a skull pin, meticulously enameled to look cracked and worn by ages of decay. With the flick of a battery pack, its jaw would chatter, and its diamond eyes would roll.

Trouvé’s catalog of “electric jewels” is full of intriguing hints: “luminous diamonds,” a “headlight tiara,” “electric flowers,” and “luminous electric walking sticks.” Many of his products, it seems, were intended for theaters, which were home to some of the first and most extravagant displays of electrical fashion. One such showpiece was the “lustre-vivant” of Victoria Theaters, in which women ornamented with sparkling lights arrayed themselves into the form of a living candelabra.

Then there was the American modern dancer Loie Fuller, who made her name in the 1890s with her flowing “serpentine dance.” She twirled swaths of silk through changing colors of electric light, allowing her to appear at one moment like a flickering flame, at another like a lily, at another like a splashing fountain. She was not just a gifted dancer but a prolific inventor: she held the patent for the lighting mechanism that enabled her stage transformations.

Such spectacles were not without their risks. As one account in Scientific American recalls,

The actors were decked with glittering crowns, and, to add to their brilliancy, they were so made that a chaplet of electric sparks encircled the wearer’s head… But “sensation,” pleasing enough doubtless to spectators, painfully verified the truth of the Shakespearian maxim touching the uneasiness of the head wears a crown, for one of the performers was grievously injured by the passage of the current through his or her head, instead of through the star-spangled ornament.

Just as theatrical were the electric fashions of high society. The Gilded Age did not only glitter: it threw off sparks. “Electric light” proved to be an irresistibly current theme for costume balls. The most elaborate example might be the gown worn by the wife of one South Dakota electricity magnate. It was fully wired, from head to heel; when she stepped onto a copper plate, she lit up from the bulbs on her skirt to her incandescent crown. More famous, however, is Grace Vanderbilt’s electricity-inspired gown, worn to the 1883 Vanderbilt Ball. Tinsel lightning bolts zig down the bodice; at the ball, she carried a working electrical torch.

In the same year, with characteristic techno-optimism, The Electrical World announced that women’s bustles would soon be enlarged, to create room for batteries:

It is becoming more and more fashionable for ladies to wear electric jewelry, and room for it must be found in some portion of the costume… Any color can be got out of glass, for a tiny peep of light the smallest battery is necessary. A dashing demi-mondaine can thus make a pennyworth of glass eclipse a duchess’ diamonds or rubies. The correct thing now is to wear a star or brooch, illuminated by electricity, upon the left shoulder, instead of the diadems at first worn at fancy balls.

While there’s no sign this prediction came true, by 1897, one could buy electric tie lights “in any color or clear crystal, also in opal, which appears like a ‘ball of fire.’” At the press of a button, it gave “enough light to read by.”

The market for such novelties, however, was dwarfed by the huge craze for electrical cure-alls. Vendors hawked galvanic rings on the streets of London, advertising them as good for whatever ails you. Galvanic belts were particularly popular; advertisements showed muscle-bound men emitting powerful, and presumably healthful, zigzag rays from their midsections. A few of these belts really did carry a mild electric charge, but other iterations were simply smeared with hot pepper, mimicking the pinprick tickle of the genuine article. The burning sensation made the wearers feel like “something was happening.”

Then there were the galvanic amulets. They look very odd, borrowing the forms of more typical jewelry—hearts and crosses—but setting these symbols within rings of counterpointed copper, brass, and steel, the different metals working together to create a mild charge when pressed against the skin. Advertisement implored readers to “throw away drugs,” promising the amulets could cure anything from despondency to kidney disease to  “impure blood.”

Why the faith in these panaceas? Electricity was a vigorous force that seemed to be at work in all living things; perhaps the secret to good health was simply to recharge, like a battery. This is what Carolyn Thomas de la Peña, leading scholar on the history of medical electricity, describes as the belief “that energy could be produced in external devices and imported, undiminished, into the body.” This belief, she argues, was strengthened by the heightened demands of modern life:

My theory is that because of a particular paranoia over energy-depletion, many people believed that the only way for the body to keep pace with modern life was for it to consume the same technologically generated energies that threatened its destruction.

Electricity had come a long way from the sparkling play of aristocratic salons. An increasingly industrial—and increasingly electrified world—seemed to demand that people plug their bodies into the current, that they electrify themselves.