Digitization allows researchers to trace editorial and authorial changes in archival content. Both are central to the study of this famous abolitionist pamphlet. 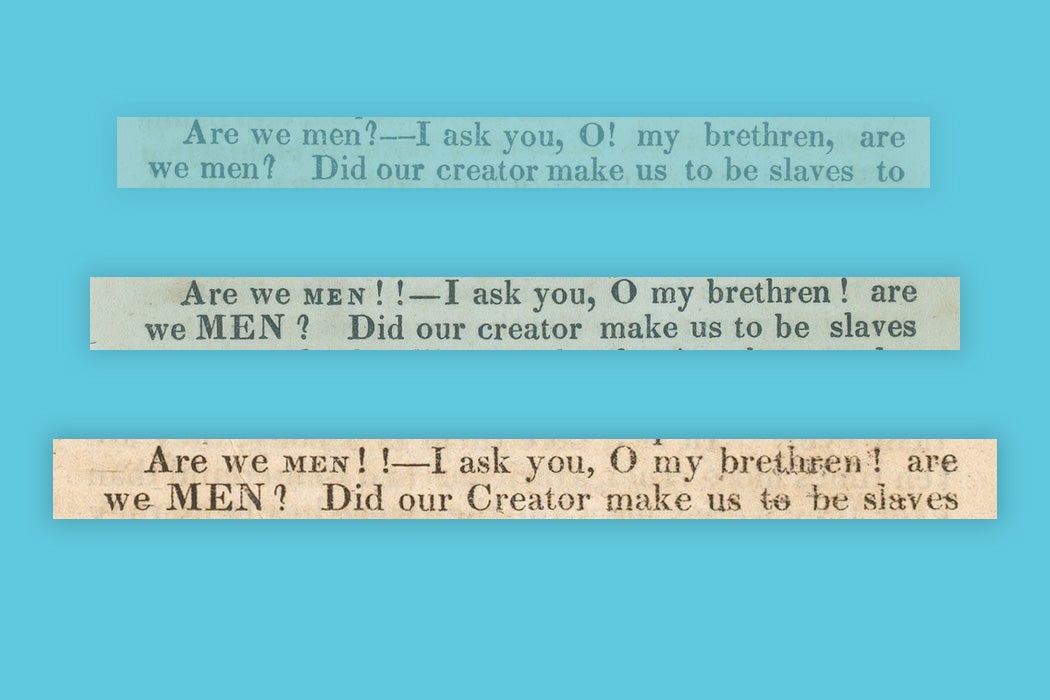 If you’d like to elicit the collective groan of archivists everywhere, simply ask aloud “Why don’t archives just digitize everything?” It seems like a simple solution to problems around access and preservation but, in reality, it is anything but. Digitizing special collections can be much more involved than scanning old family photos at home (though that is also a valid form of personal archiving). Materials need to be arranged, described, conserved, digitized, preserved in a digital repository, and attached to a discovery layer designed for patrons to access across the world. Each step requires specialized labor, making the process more time consuming and expensive than one might assume- and that’s not even getting into complicated formats like nitrate film or wax cylinders.

With limited resources, archivists are constantly making decisions around prioritization. These decisions come heavily into play when planning a digital collection. If we can’t be comprehensive in our work, we have to tell a story with our selections and make sure it’s clear how and why our decisions were made. For a collection like Slavery, Abolition, Emancipation, and Freedom: Primary Sources from Houghton Library  (SAEF), selection criteria involved a number of factors including physical condition, frequency of citation in the field, and online availability. Some material was already available online, but in lower visual quality or behind paywalls. Some material required too much repair and conservation to be ready within the timeline. These practical concerns have to be weighed against the intellectual project of building a cohesive collection that has both expected big names and unexpected rare discoveries.

The transformational possibilities of digital access might be a less expected factor in the curation process. For many archivists of a certain tradition there can be no topping the personal experience of coming into a reading room and handling the physical materials. Letters written by Frederick Douglass are meaningful not just for their content, now accessible online, but also for the emotional link to the past that can be experienced when you realize you are holding in your hands the same sheet of paper as one of the most influential thinkers of the 19th century. On the other hand, special collections reading rooms have rules about handling and security that might restrict your research process in ways digital access completely upends. Those research possibilities are one of the reasons why our selection process led to the digitization of three different editions of David Walker’s Appeal in Four Articles: Together with a Preamble to the Colored Citizens of the World, but in Particular and Very Expressly to Those of the United States of America.

The ability to compare and trace changes is key to the study of authorial intent and the editing process.

Houghton Library’s reading room is open to the public. You don’t need to be a Harvard student or professor to access our materials, or even to be a student or professor anywhere—any interested person is welcomed. The reading room’s policies are designed to maintain the safety of staff and materials and are kindly, but firmly, enforced. One of the most important of those rules is that visitors can only access one item at a time—whether that is a single rare book or a single box of archival material. This rule closes the door to certain types of comparative research that are opened up through digital access, where materials can be compared on as many different screens in as many different windows as your computer can handle. The ability to compare and trace changes is key to the study of authorial intent and the editing process, two themes that have been central to the study of Walker’s Appeal.

David Walker was born into freedom in Wilmington, North Carolina at the end of the 18th century. Legal rulings in the early republic chose to break with English common law and follow the ancient Roman law that quia partus sequitur ventrem, or “offspring follows the womb.” With a free mother and enslaved father, Walker inherited legal freedom but also a deep awareness that the laws and practices around Black life in the United States were grossly unfair. Walker took advantage of his free legal status to travel across the states and engage in political activism, as a member of Black churches and Black social organizations like the Prince Hall Masons.

By 1826 he was living in Boston, married to Eliza Butler, a member of a prominent Black Boston family and becoming increasingly well known as a strong business man and promoter of civil rights. Walker was an active part of a thriving Black community, and served as a founding member of the Massachusetts General Colored Association, described by Marc C. Arkin as “the most forward-thinking black civil rights organization of its day.” Kathyrn Grover and Janine V. da Silva, writing for the National Park Service, describe a Boston neighborhood full of business owners, service workers, clergy, and families all interacting in community and bustling with civil rights activism. 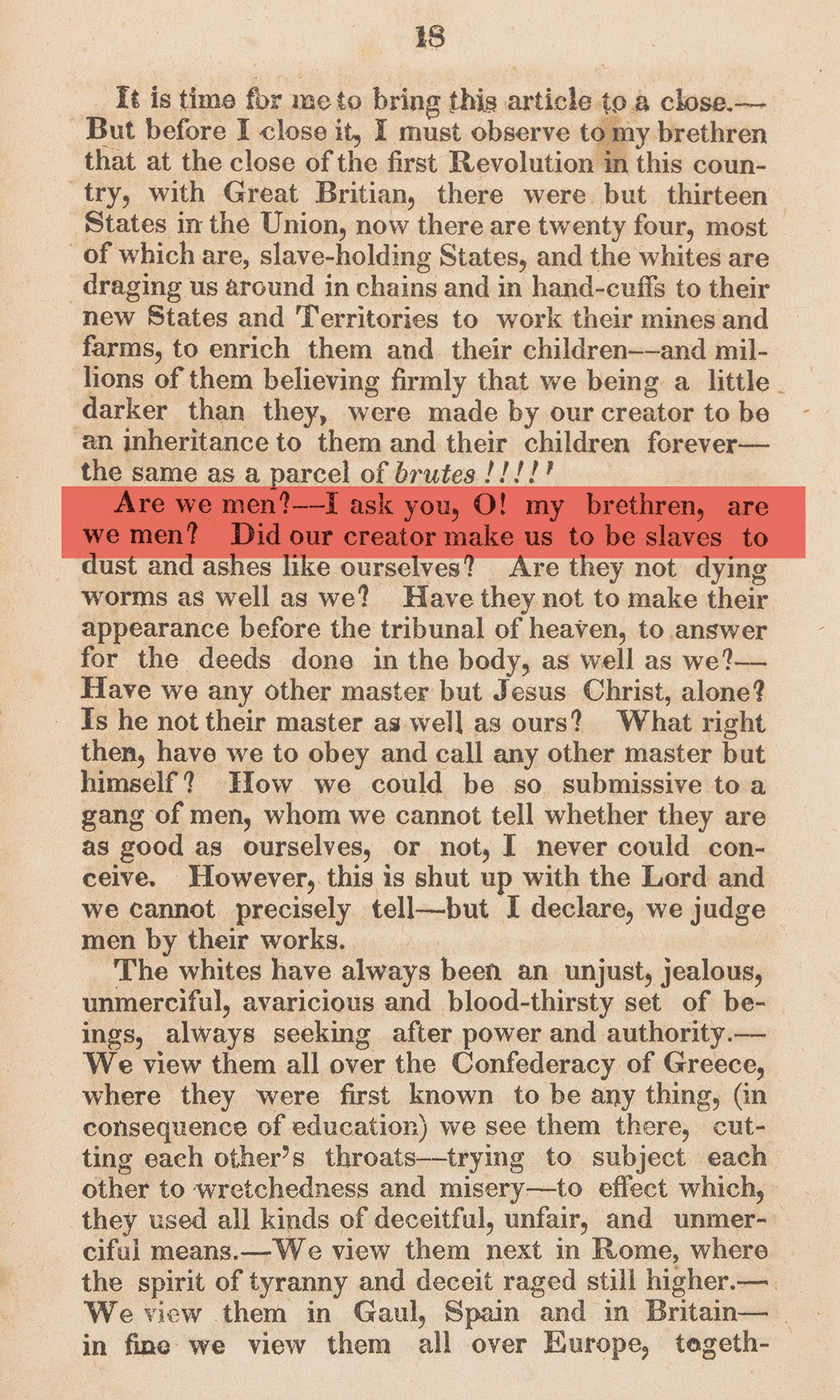 A page from the first edition of David Walker's Appeal 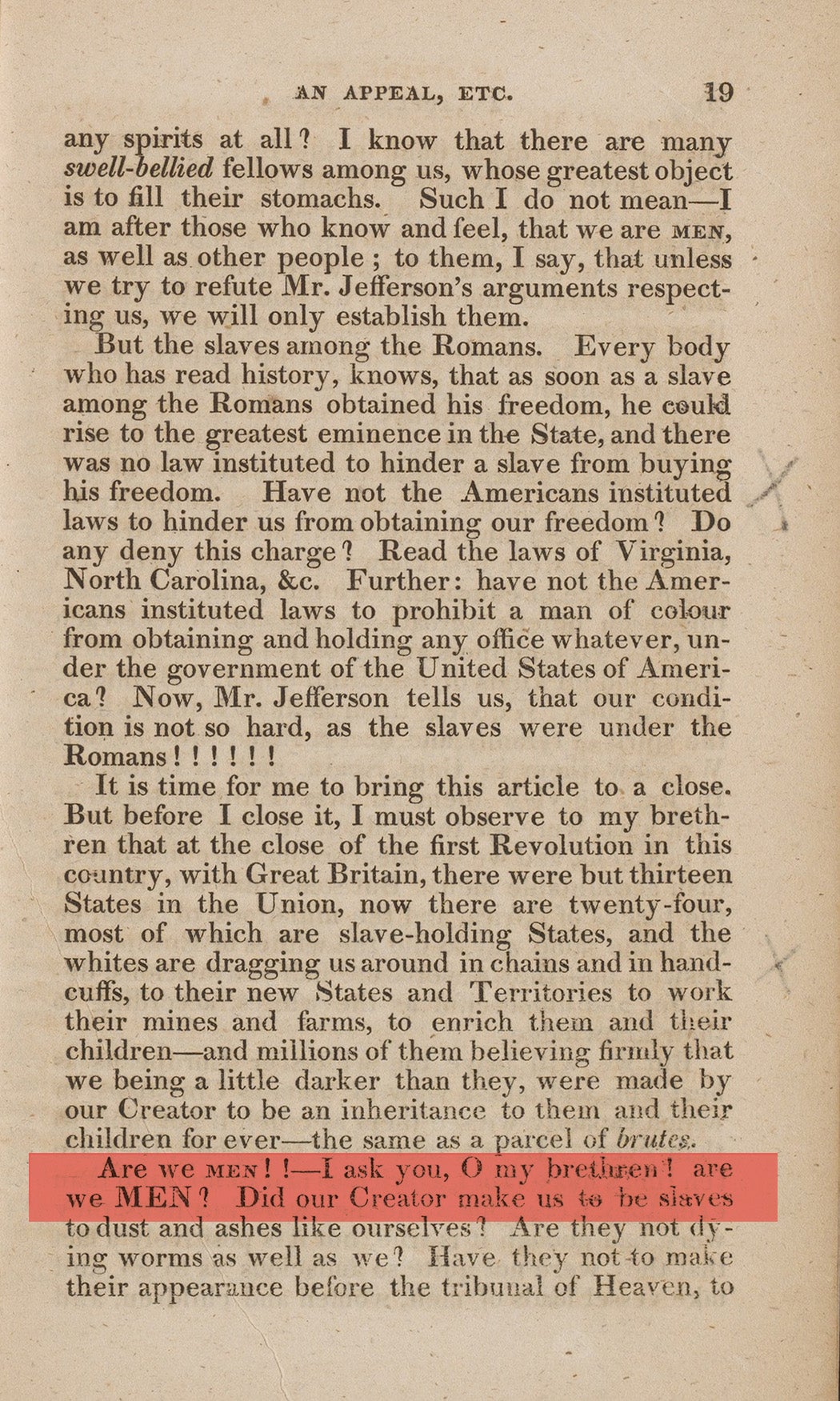 A page from the second edition of David Walker's Appeal 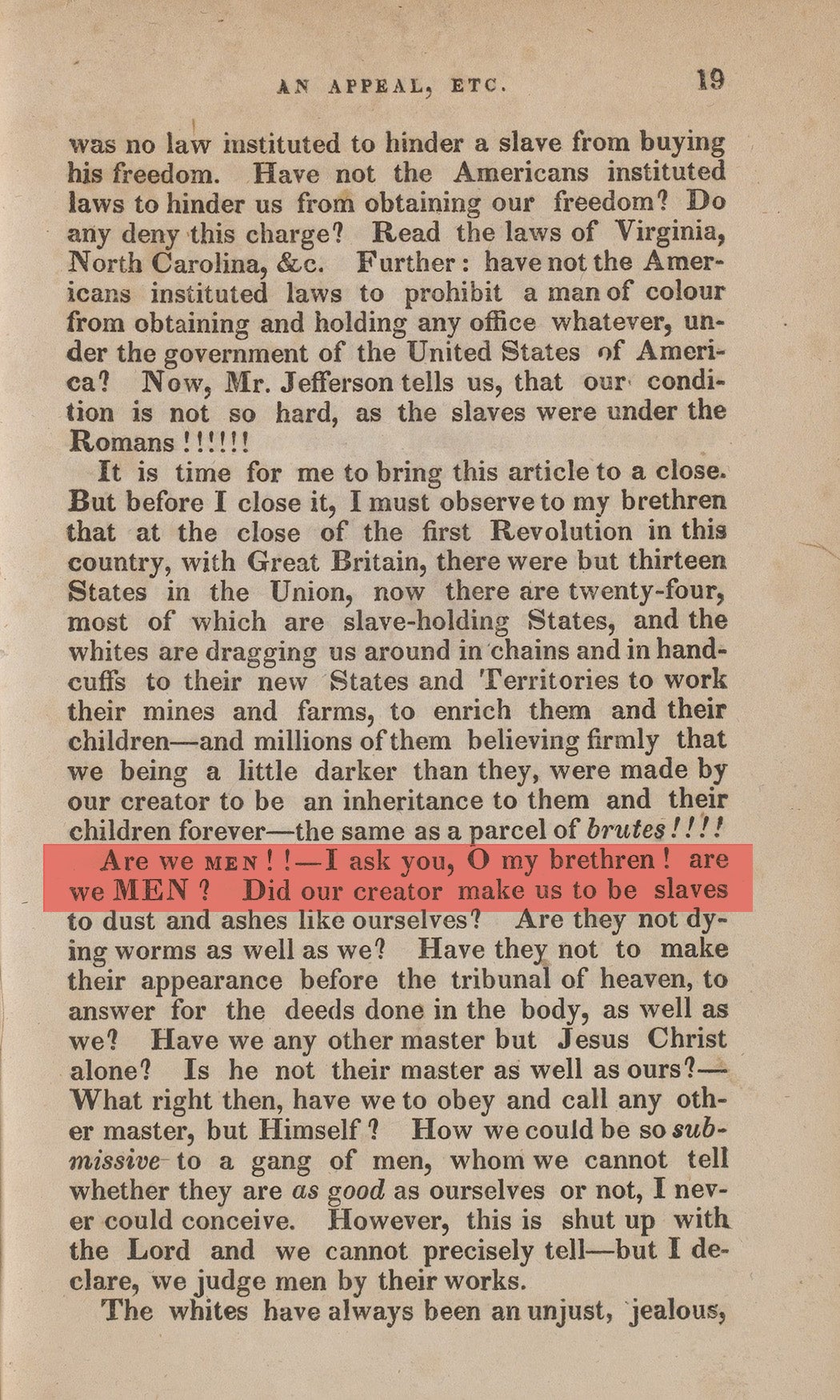 A page from the third edition of David Walker's Appeal

Few could be argued to be as bustling as Walker, who positively exploded onto the broader consciousness with the publication of the first edition of the Appeal in 1829, and the subsequent second edition and third edition, both in 1830. The fearless and fiery tone of Walker’s writing is as challenging in 2022 as it was in 1829. Everything about these publications was radical and dangerous, from the content of his message to, as Marcy J. Dinius argues, his editorial decisions around typography. Dinius explains that

the four articles… preach the value of education, insist on racial unity, condemn the African colonization movement, warn whites of an impending apocalypse if slavery continues, and, most controversially, promote violence as a legitimate- if not imminent- form of resistance.

Walker’s writing was bold in its arguments, especially in sections that directly criticized the hypocrisy of White Christian supporters of slavery and that argued against the African colonization movement. Abolitionists who wanted an end to slavery in the United States didn’t necessarily want Black people to stay in the U.S. as integrated citizens. Both Black and White abolitionists had arguments for moving freed Black people to African colonies like Liberia and Sierra Leone, but Walker was firmly against this as a solution and wanted equal rights in his country of birth. The writing displays Walker’s education, using eloquent rhetoric that reflects the Black oratory tradition and stinging castigations that pulled zero punches around the oppression of Black people. The evolution of the text across the three editions shows a writer who was sticking to his principles and standing firm. Dinius provides an example of this editorial evolution through a single sentence. In the first edition, Walker wrote “Are we men?– I ask you, O! my brethren, are we men?” By the third edition, that line was printed as “Are WE MEN! !– I ask you, O my brethren! are we MEN?” The words remain the same, but the rhythm and emphasis were shifted as Walker finalized his thoughts.

The Appeal grabbed readers’ attention in as dramatic a manner as Walker could have possibly imagined. In her book, Maria W. Stewart and the Roots of Black Political Thought, Kirsten Waters writes about how the pamphlet itself was viewed as dangerous by pro-slavery forces, while Walker actively worked to get his text in the hands of Black readers. He did not direct his writing to White audiences, and in the third edition added a special message to Black readers, saying that:

It is expected that all coloured men, women, and children† of every nation, language, and tongue under heaven, will try to procure a copy of this Appeal and read it, or get some one to read it to them, for it is designed more particularly for them.

The footnote under that dagger gives one of the clearest indications of how impossible it is to understate Walker’s boldness and the clarity of his pro-Black message:

†Who are not too deceitful, abject, and servile to resist the cruelties and murders inflicted upon us by the white slave holders, our enemies by nature.

With such a strong, fiery voice, and with his active support of freedom by any means necessary, Walker’s Appeal was received by Southern slaveholding states as an active threat. Walker knew that Black people in those regions were most in need of his inspiring arguments and he worked, sometimes illegally, to distribute the materials throughout the South. Sailors played an important role in getting the pamphlets from Boston to the South. Walker ran a used clothing business on the Boston waterfront, buying used clothes from sailors, repairing them, and selling them back to other sailors. Peter Hinks in his book To Awaken My Afflicted Brethren: David Walker and the Problem of Antebellum Slave Resistance recounts how the Appeal was smuggled by being sewn into the linings of clothing sold to Black seamen.

The Appeal’s impact was not relegated to the South. Lori Leavell writes about the recirculation of the pamphlet through publication in northern newspapers like the Philadelphia Inquirer and the New York Evening Post. Leveall argues that the republication of portions of the pamphlets directly influenced Northern perceptions of Black radicalism. So great was the infamy and perceived radicalizing power of Walker’s Appeal newspapers refused to even mention the title, referring to it only as “that incendiary pamphlet.” The third edition of the pamphlet in the SAEF collection reflects the popularity of the text through the marginalia from its original owner, Rev. Frederick West Holland, a Unitarian minister from Concord, Massachusetts. Holland wrote two notes on the front cover of the pamphlet, providing insight to his reception: “a celebrated incendiary Pamphlet much complained of at South! Written entirely by a Negro-”

David Walker’s Appeal was a living text with three revisions within two years. When selecting materials for a digital collection, there will always be some materials that get left out. There are also occasions when there is a clear value in providing materials that are actively in conversation with each other—even when they seem like they are just the same text three different times! 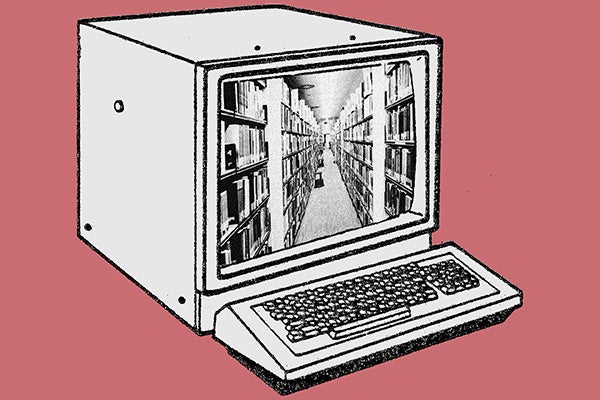 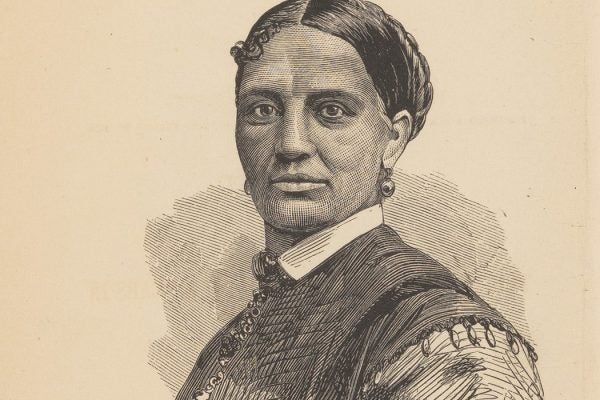 Elizabeth Keckley’s Memoir Behind the Scenes, or, Thirty Years a Slave and Four in the White House

Keckley’s decision to write about her employers from the viewpoint of a household laborer--she was seamstress to Mary Todd Lincoln--enraged audiences.