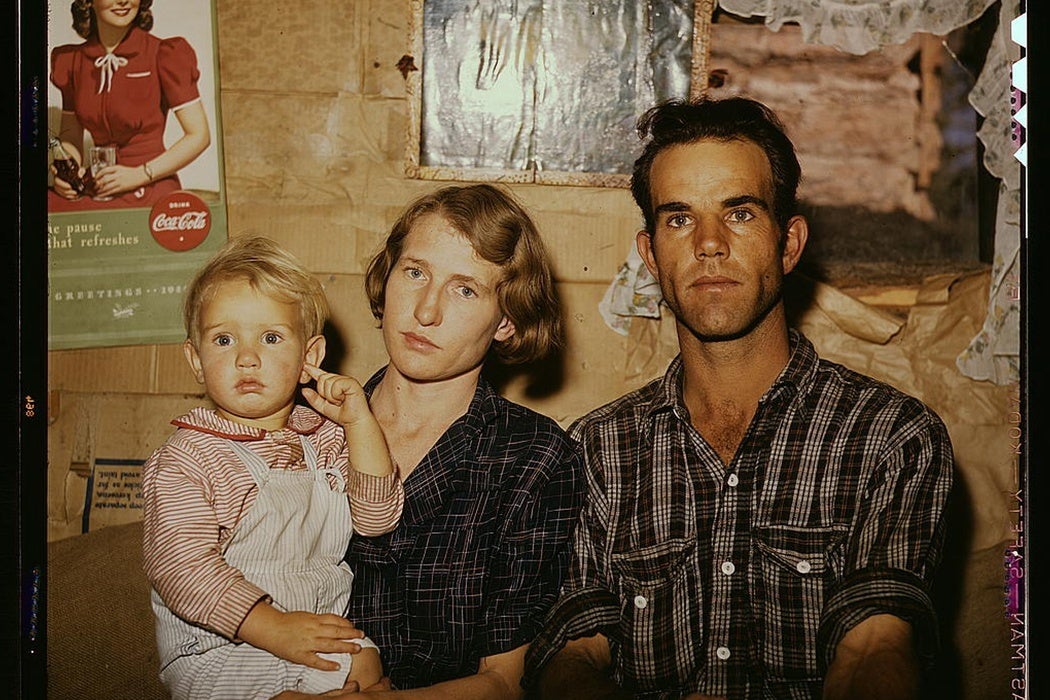 Our ideas about parenting have changed considerably over the years.
Jack Whinery, homesteader, with his wife and the youngest of his five children, Pie Town, New Mexico (LOC),Lee, Russell, 1903-1986, photographer. Via Flickr
By: The Editors
4 minutes
Share Tweet Email Print

In the New York Times Sunday Review, Paul Tough tells us about strategies to encourage healthy child development. In one experiment, there was a control group, a group that received nutritional support, and a group that

received hourlong home visits once a week from a trained researcher who encouraged the parents to spend more time playing actively with their children: reading picture books, singing songs, playing peekaboo…. The children whose parents were counseled to play more with them did better, throughout childhood, on tests of IQ, aggressive behavior and self-control.

Tough’s takeaway is that effective parenting can be as much about emotional tone as content. We’ve recently discussed how anxious parents make for anxious kids, and how little Western society values play in early childhood development. As Paul Tough says,

Nurturing the healthy development of infants and children, whether in the home or in the classroom, is hard and often stressful work. What we now understand is that the stress that parents and teachers feel can in turn elevate the stress levels of the children in their care, in ways that can undermine the children’s mental health and intellectual development.

Parents can improve their relationships with their kids (as well as their kids’ emotional development) simply by having fun together. Some researchers call it “positive parenting.”

A group of researchers in the US found that (white) parents with optimistic behaviors and expressions generally brought up similarly positive children, whether with dedicated play or casual positive enforcement around everyday tasks. The authors rightfully point out that, for far too long, psychology has focused on maladaptive behaviors and disorders, rather than exploring best-case scenarios: children that grow up happy, self-confident, and independent.

Chillingly, parents with traits the researchers describe as “conscientiousness, agreeableness, and low neuroticism” figured out how to do even more positive parenting over time; parents without those traits seem to run shorter in patience and tolerance over time.

Of course, this effect isn’t reliant on personality alone: some parents just need a bit of help switching from yelling to encouraging. Researchers and practitioners have been working on this for a long time, but unfortunately those interventions can only occur after maladaptive behaviours have been observed.

For some illustrative before-and-after tales, check out this short primer from 1980. Families coming to the Parenting Clinic at the University of Washington shared their stories:

Matthew, age four, was brought in by his mother, a single working parent. She reported that her child was ‘aggressive, jealous, sassy, demanded a lot of attention, refused instructions, and resented discipline.’ … In reviewing Matthew’s tapes, we found that the mother frequently did not give positive attention to appropriate play and that she tended to dominate their joint activity by imposing her own adult-level structure and expecting adult-level conversation. She expected Matthew to respond to her in an adult way. She had little idea of behaviors that were normal for a four-year-old.

Carolyn Webster-Stratton and Kate Kogan provide advice on when to seek help, and what general guidelines to follow for good parenting.

An article written 20 years later provides four more case studies of parents with a need for guidance in positive reinforcement. Michelle Marchant and K. Richard Young employed an undergraduate student and graduate student, both in special education programs, as their parenting coaches, who performed at-home visits and supported parents’ positive interactions with their kids. Without extensive training, these coaches made impressive gains.

The authors suggest a society-wide program: parents who’ve completed their courses of coaching can then coach others, creating a social network of support and reinforcement.

Of course, where play turns into sport, competitiveness and aggression could counteract those positive traits we’re looking to inculcate. A team of researchers from Quebec questioned whether “rough and tumble” play could have a substantive effect, especially from fathers bringing their children up in a gendered society. They summarize a number of findings about the types of father-children interactions that occur most often, and how those differ from mother-child interactions:

Empirical research into paternal involvement has shown fathers to generally have less involvement than mothers in all aspects of parenting with the exception of physical play. Mothers spend more time with their infants than fathers, but the time devoted to physical play compared to other activities is proportionally more important for fathers…Infants respond to fathers with more excitement when the fathers develop heightened, stimulating, and playful relationships…Fathers spend more time and engage in more physical play with their sons than with their daughters…Children—especially boys—prefer physical play with either parent to any other form of play, but their pleasure seems to be more intense during physical play with their fathers… As a result, mothers are perceived by children primarily as a source of well being and security, while fathers are the preferred playmates, particularly for boys.

As a preliminary study, this article offers no concrete findings. But the authors point out that competitiveness can be as useful as collaboration (in terms of knowing when to assert oneself), and that being able to live with conflict without becoming aggressive is a worthy goal: something that children of both genders need to learn, from parents of any gender. 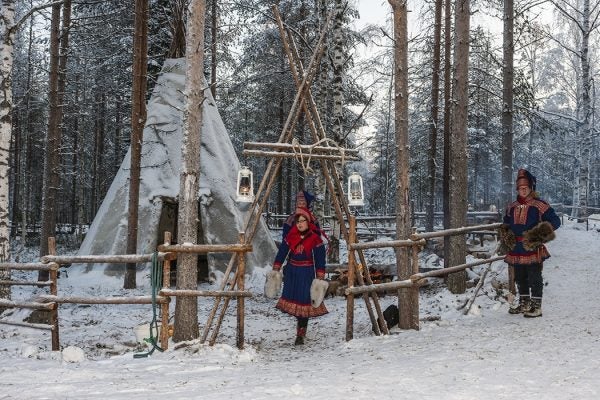