In the late 19th century, Californians were eager to part with their reputation for wildness, so they adopted an “English” flower as their symbol. 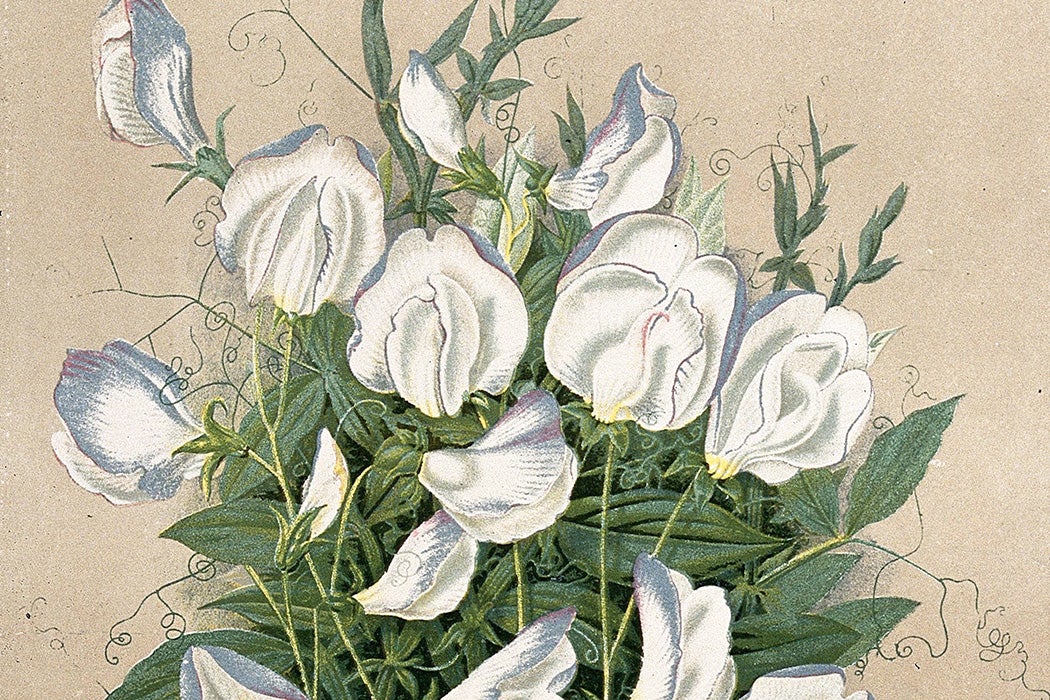 In the nineteenth century, many white people outside of California thought of the place as wild, characterized by the outlaws of the Gold Rush and filled with Native Americans, Chinese immigrants, and Mexicans—all broadly characterized as barbarous. But as Elizabeth A. Logan writes, around the turn of the twentieth century, state boosters transformed this image, with the help of the lovely flower known as the sweet pea.

To fight to the image of California as wild, a new campaign emphasized the flower’s association with the refinement of the eastern United States and the countries of Europe, particularly England. For example, the seed company C.C. Morse & Co. played up the flower’s popularity in England in its catalogs and marketing materials, which also noted the company’s participation in the National Sweet Pea Show held in London.

Actually, it’s not at all clear where sweet peas were first cultivated, since they grew wild around the world.

“The lineage of the blooms’ arrival in the United States from England held the value of a provenance and functioned as a critical element of its allure,” Logan writes.

Lester L. Morse, heir to the seed company, knew this well. In 1899, 150 delegates from the National Association of Agricultural Colleges and Experimental Stations visited California. Morse walked them through the fields and allowed them to pick “all the sweet peas they could carry.”

Actually, it’s not at all clear where sweet peas were first cultivated, since they grew wild around the world. Various researchers have suggested Sicily, China, Malta, or Sri Lanka. Horticulturists did grow them in England starting around 1700, but it was breeding work done in the US that developed the many varieties C.C. Morse showcased. And that work was accomplished largely by Chinese-Americans who produced seeds for gardeners to plant.

Logan writes that Chinese laborers at the company handled “roguing”—picking weeds from the sweet pea plants so they couldn’t cross-pollinate—and gathered and sorted the seeds. A much smaller number of Chinese-Americans were responsible for designing new varieties of blossoms. Chinese immigrant cousins Wong Ah Hem and Henry Ohn rose to prominence within C.C. Morse, supervising other Chinese workers and conducting breeding experiments in the fields.

Both men became successful professionals. Ah Hem built an international import business. Yet when his American-citizen daughter sought to reenter the US she had difficulty because of Chinese exclusion laws.

“Even though many Californians used flowers to define their space as a quasi-British, refined sweet pea paradise, the business of floriculture highlights simultaneously the myth and fragility of this version of California,” Logan concludes. “Concurrently, this public British mask of the company’s sweet peas hid the efforts of Chinese labor in the fields, supervising and breeding, as well as their successes and trials.”