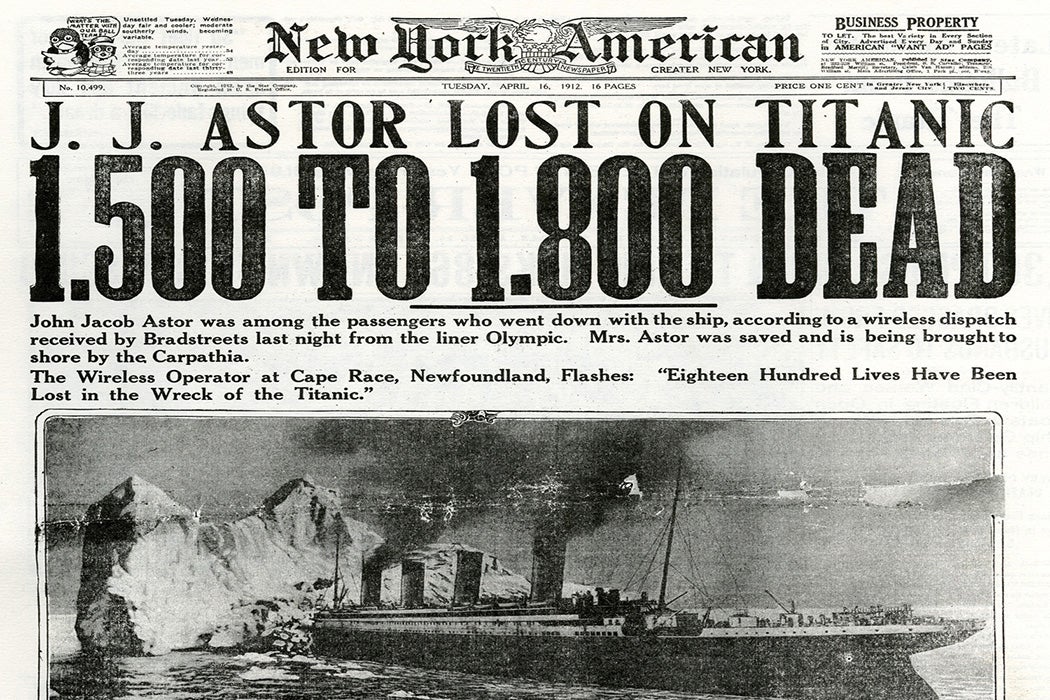 The New York American 1912 Headline for the sinking of the Titanic
via Wikimedia Commons
By: Matthew Wills
4 minutes
Share Tweet Email Print

The story of the Titanic usually ends with the ship’s sinking in April 1912, the rescue of survivors, and the ensuing scandals and subsequent safety improvements on ocean liners. But what of Titanic’s dead? Most of the more than 1,500 victims were lost to the North Atlantic. Crews aboard four recovery vessels pulled just 337 bodies out of the water.

Scholar Jess Bier examines what was done with those bodies and explains how their identification and treatment was wrapped up in their economic valuation. All the recovered dead were numbered for the records, but some counted a lot more than others. As she notes, “Decisions about which bodies to bury at sea were made largely according to the perceived economic class of the recovered victims, and those with third-class tickets were far more likely to be returned to the water.”

The Titanic’s microcosm of class distinctions is now infamous. “From the allegations that some steerage passengers were locked below decks, to the overwhelming better chances of survival for first-class passengers, such distinctions were assumed to be a natural part of society,” writes Bier. Class distinction also, it seems, extended beyond death. Bier contrasts the preservation and return of well-off victims with the rapid decomposition and burial at sea of the less well-off. Approximately one-third of the recovered bodies, some 114 of them, were returned to the very waters from which they’d been pulled.

The relatively new idea of life insurance assigned monetary value to (certain) bodies. Wealthier passengers “would almost certainly have life insurance policies that would pay for their burial or cremation.” Working and middle classes were much less likely to have life insurance. Even if they did, explains Bier, “an identifiable body had to be recovered before the family of the deceased could receive a life insurance payout. Yet because burial at sea was predicated on class, the families of victims in third class were less likely to be presented with such a body.”

There were, writes Bier, two criteria for bodies being preserved for land burial. Bodies had “to be seen as readily identifiable, whether as individuals or even as human beings.” (Days afloat while being bleached by the sun made for some very grim remains.) Secondly, bodies also had to have an “economic value even after death, [with a] high social or economic worth.”

The cable ship MacKay-Bennett ended up doing most of the recovery work for floating dead. Built to lay and repair transatlantic cable, the ship was provisioned in Halifax, Nova Scotia, with a chaplain, embalmer, one hundred coffins, one hundred tons of ice, and what was assumed to be plenty of embalming fluid. It wasn’t.

Bodies were numbered as they were brought aboard. Physical characteristics, clothing, identifying marks, and personal effects were all documented. Personal effects were stored separately, labeled with the same body number, and valuables were locked up by the purser. Without enough material or space to handle bodies and their belongings, the crew had to triage.

“No prominent man was recommitted to the deep,” said the Mackay-Bennett’s captain. “It seemed best to be sure to bring back to land the dead where the death might give rise to such questions as large insurance and inheritance and all the litigation.”

Many of the artifacts recovered from the bodies buried at sea were catalogued and brought to Halifax, where they were then burned as unclaimed property. It was a final erasure. Meanwhile, the $5 million in insurance for the ship was paid within 30 days of the sinking.

Bier writes that the Titanic recovery “played a role in future practices of body identification, which only began to be standardized […] after World War Two.” All this was before DNA analysis, of course, which has since been used to identify passengers and expose a fraud.

On the North Atlantic, the ships were small and the trips were long, making it difficult to maintain the land-based social distinctions.