On the North Atlantic, the ships were small and the trips were long, making it difficult to maintain the land-based social distinctions. 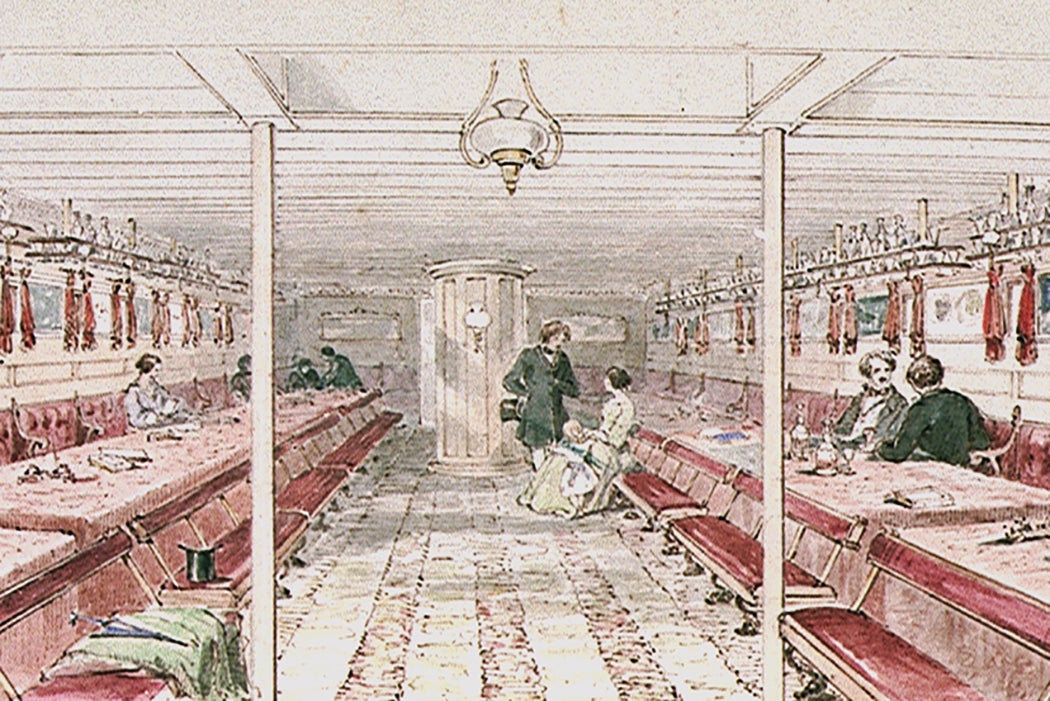 The Victorian segregation of men and women into “separate spheres” was quite rigorous in hotels, trains, and steamboats by the 1840s. Escorted and unattached ladies—ladies being very much a middle and upper class designation—were kept apart from unattached men (whatever their social status) via separate entrances, rooms, cars, and cabins. But when it came to steamships on the transatlantic run, things were a little different.

Separate public spaces were not so easily maintained on the North Atlantic, especially at the beginning of regular service in 1838. The ships were small and the trips were long, making it difficult to maintain the land-based social distinctions.

Consider Miss Leslie’s Behaviour Book: A Guide and Manual for Ladies, published in 1859, when the crossing took about nine days. Eliza Leslie offers advice on minimizing contact with strangers during domestic travel in hotels and railways. But the chapter on shipboard etiquette understands that minimizing contact was nearly impossible when people were confined together aboard a ship. This sort of travel created a temporary community, where “so many neighbors are crowded into so small a space.” Leslie continued: “There are few places where the looks and manners of the company are more minutely scanned than on ship-board; and few where the agreeability of a lady will be more appreciated.”

“Separate spheres [were] fully realized in shipboard interior architecture just as it began to unravel on land.”

Shipboard norms necessitated looser conventions, at least until prevailing notions caught up with the shipping industry in the later part of the century. But by then, the prevailing notions on land were beginning to change. “Separate spheres was [sic] fully realized in shipboard interior architecture just as it began to unravel on land,” writes scholar Douglas Hart, who delves into the details of luxury ship design and social/sexual conventions these designs mirrored.

Ships became larger, more comfortable, and faster between the 1840 and 1870s, but the saloon remained the social center (and dining room) of premier class passengers. The saloon was the main cabin—“saloon” as in “bar” is another meaning of the word. The most expensive fares were, in fact, called “saloon class” before they were called “first class.”

There was also often a women’s cabin, but no separate male sphere until the 1870s, when the smoking room was introduced. Before that, if you wanted to smoke, you did it on deck. The saloon remained a common meeting ground between men and women, even unattached men and unattached women.

The first ship lit by electricity, Cunard’s Servia (launched 1884) also introduced a large music room, equivalent to the drawing room. This steel-hulled boat also had a smoking room and a ladies cabin (“ladies’ boudoir”). The saloon was used just for dining. The City of Paris (1889), by the way, had a smoking room that fit 200, “making the air blue at once.”

“Gendered social spaces thereafter rapidly lost ground in the interior architecture of first class passenger space, culminating in a proliferation of new common spaces and the opening of the smoking room to women.”

In 1905, when transatlantic travel took about five days, Cunard introduced the Lounge, a new common social room, as found in many hotels of the day. Two years later, as another Cunard liner was launched with a Lounge, a review of the space in the New York Times described it as “a fairylike place to which both women and men may resort to enjoy cards, music, tea or coffee or gossip.”

The two most famously ill-fated luxury liners, the Lusitania, (1907), and the Titanic, (1912), also had enormous Lounges.

One more thing about ocean liners; the more relaxed social atmosphere meant formal introductions were not required. The allure of steamship travel wasn’t without its transgressive aspects, at least for those who afford it. 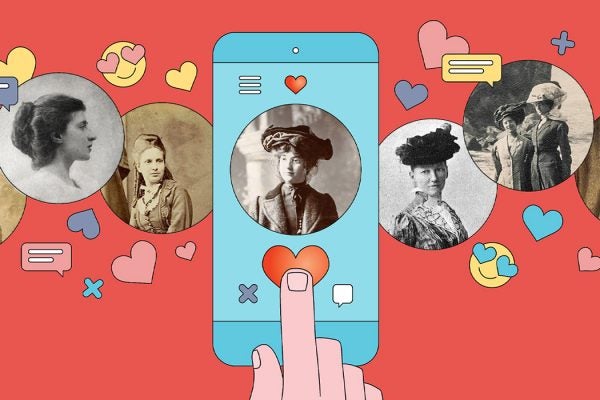 The “Dating Apps” of Victorian England

They didn't have smartphones back then, but they still had personal ads.