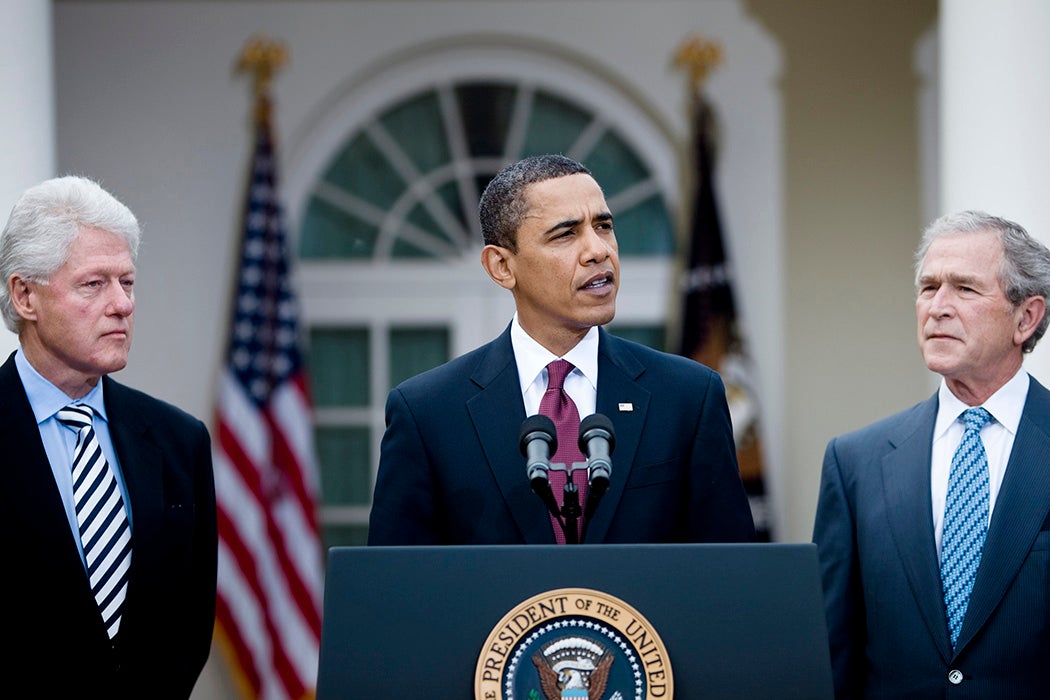 In his 2019 State of the Union address, President Trump proclaimed: “great nations do not fight endless wars.” This sentence summed up an important part of his right-wing populist campaign rhetoric—that the United States should reduce its overseas military commitments and focus on putting “America First.” It also distinguished him from mainstream Senate Republicans, who just days earlier had voted en masse to oppose any withdrawals of troops from Syria and Afghanistan.

And yet, I would argue, Trump’s impulsive governing style and deep personal insecurities have led him to fall back on the military-oriented security strategy that the political establishment has followed since 2001. The world is still trying to wrap its head around his decision to assassinate Iranian General Qassim Soleimani on Jan. 3. It has further heightened tensions with Iran and made pulling US troops out of Iraq less likely. Trump’s unilateral decision in 2018 to withdraw the United States from the Iran nuclear disarmament deal sparked a cycle of provocative rhetoric and proxy strikes between the states throughout the Persian gulf region.

In response to the assassination, House democrats voted later in January to revoke Congress’ 2002 Authorization for Use of Military Force in Iraq (AUMF). Trump’s National Security Advisor Robert O’Brian had initially cited the act as one justification. This vote was largely symbolic. Not only will the senate shelve any such measure, but the 2001 authorization that has sustained the “global war on terrorism” would remain safely in place.

President Obama sought a more diplomatic style of foreign policy, with a particular departure on the Iran nuclear deal. Yet he actively cultivated the President’s unilateral powers to wage wars and drone strikes as “interventions,” in multiple states surrounding Iran. While the Democratic party has generally sought clearer restrictions on the President’s powers and military actions, many centrist Democrats continue to support America’s overseas wars. Twenty-four Democratic senators sided with the Republican majority in the 2019 vote.

On a fundamental level, Presidents Bush, Obama, and Trump have been able to muddle through America’s foreign wars because the American public remains insulated from their consequences. There’s no draft, and so it is mostly working class Americans serving and dying in our wars. The dollar remains the cornerstone of the global financial industry and energy trade. Foreign policy has been absent from the 2020 Democratic primary debates, at least until the Soleimani assassination. When pressed on plans to demobilize from the Middle East on Jan. 14, every candidate deflected the question except Senators Warren and Sanders, who supported specific troop withdrawals. It seems there’s just no political benefit for most candidates in being more outspoken.

Heightened partisan political competition keeps the public’s focus on domestic issues such as the economy and healthcare.

This moment of heightened partisan political competition keeps the public’s focus on domestic issues such as the economy and healthcare. It is thus difficult to spread awareness about the ways both parties have cooperated to maintain our military presence overseas. These include both ways the President can act without the consent of Congress and ways the United States acts unilaterally on the global scale.

I do not mean to equate the actions and aims of Democrats and Republicans. But a critical analysis of both parties is necessary to understand how the US has created its informal empire—and to envision a different future.

President Obama was elected to office in 2008 as an opponent of the Iraq War and the indefinite detention of accused terrorists as enemy combatants at Guantanamo Bay. But he inherited a set of military commitments in Iraq, Afghanistan, and elsewhere that were very complicated from logistical, political, and legal standpoints. He ultimately expanded the Afghanistan force for many years and shrank but did not close Guantanamo. US military commitments became compounded with the 2011 “Arab Spring” protests that spiraled into civil war in Libya, Syria, Yemen, and elsewhere during his term.

Law professors Curtis Bradley and Jack L. Goldsmith argue that the nature of these challenges presented Obama and his administration with the opportunity and choice to expand and clarify the legal scope of the war authorizations originally targeted at Al-Qa’ida, the Taliban, and Iraq. The administration’s lawyers defended arguments in federal courts that favored allowing the President to address a wide variety of targets outside the original scope of the acts. This included—as early as 2009—explicitly authorizing detaining members of “associate forces” and “individuals who provide substantial support” to Al-Qa’ida and the Taliban. The courts also agreed their jurisdiction did not extend to detentions inside Afghanistan. The administration also employed the international law concept of jus in bello when defining Obama’s conflicts. This had the joint effect of seeking to restrict military actions to proportional attacks on non-civilian targets, while also further normalizing them on the global scale.

Obama subsequently turned to the AUMF to justify his intervention against the Islamic State in Iraq and Syria starting in 2014. His administration argued it was an “associated force” of Al-Qa’ida, despite being having split from and become an enemy of it. Partisan rancor is responsible in part for the administration needing to reinforce the 2001 act. Republicans in congress did not agree to Obama’s proposal for a new AUMF explicitly restricting the President’s authority to fight the new enemy. They neither wanted to hand Obama a victory or to restrict the authority of the next president.

As a result of this substantial body of legal and political precedents interpreting the AUMF as authorizing wars of indefinite duration against indefinite combatants, Bradley and Goldsmith believe it is fitting to call it “Obama’s AUMF.”

In a sense, Obama’s effort to find a diplomatic way to block Iran’s nuclear program was a departure from the last 40 years of US foreign policy of confrontation and containment. It also seems too optimistic, in retrospect, considering America’s occupation of states ringing Iran and its long term alliance with Saudi Arabia puts them into constant military tension. Moreover, compared to other states such as China and the EU, Iran and the US have each defined their positions as enemies ideologically rather than pragmatically. In the 2016 election, not only Trump but Hilary Clinton stated skepticism of the deal and Iran’s willingness to abide by it.

Kulsoom Belal examines the fallout from Trump ending the United States’ participation in the Joint Comprehensive Plan of Action in 2018, and its chances for survival. Trump decided to withdraw from the plan after more than a year of pressure from Israeli Prime Minister Benjamin Netanyahu, citing Israeli intelligence that Iran had not disclosed all of its nuclear scientific activity. The International Atomic Energy Agency had confirmed that Iran was still complying with all parts of the deal.

The withdrawal thus did not just disrupt the Iranian economy, which was just beginning to recover from decades of sanctions. It also seemed to be a pointed message yet again to the European Union, partner states in the deal, that the United States was returning to unilateral foreign policy. EU states had enthusiastically begun trading with Iran after the deal was settled in 2015. Although Trump initially granted oil wavers for states when reimposing sanctions, it has imposed increasingly harsh sanctions even on Iran’s trading partners. While EU states have tried to find loopholes to these restrictions with a trade bartering system INSTEX, most major European multinationals are extremely wary of falling afoul of the US, a major source of their business.

The End of American Exceptionalism

How have we ended up burdened with with these unending military occupations and strained foreign relations with almost every state in the world? Is it just the fault of the Bush administration, or our increasingly dysfunctional political system overall? Aslı Bâli and Aziz Rana warn against taking a too narrow or short-term interpretation of this problem. In fact, they remind us, the United States has enjoyed wide ranging world power since the end of World War II. A vital feature of this power, which distinguished it from earlier superpowers like the British Empire, was its commitment to nation-state sovereignty and constitutionalism.

The cornerstones of this ideology were the United Nations and free-trade international capitalism. This framed the long Cold War with communist states, and did not prevent imperial-style hot conflicts such as the Vietnam war. But generally, this ideology encouraged diplomacy and economic aid as ways for the United States to legitimize its overwhelming supremacy. Liberal constitutionalism was the “default design choice” of America’s relations with most states during these years.

America has not fallen into these foreign wars because its politics have drifted to the right.

America has not fallen into these foreign wars because its politics have drifted to the right. What is actually happening is that the mask of diplomacy and constitutionalism is slipping off. The desperate attempts to maintain the global political and military dominance it has enjoyed for 75 years are causing politicians from both parties to adopt increasingly unconstitutional, xenophobic and ultimately military methods of preserving it.

As much as we can hope to uphold the rule of law, Bâli and Rana argue there will be no simple return to the old constitutional imperialism. It will require a radical departure in the goals and strategies of one or both political parties, and probably a realignment in global politics that can normalize the fact that the United States is no longer the only world superpower.

Why is the U.S. Military Occupying Bases Across Africa?