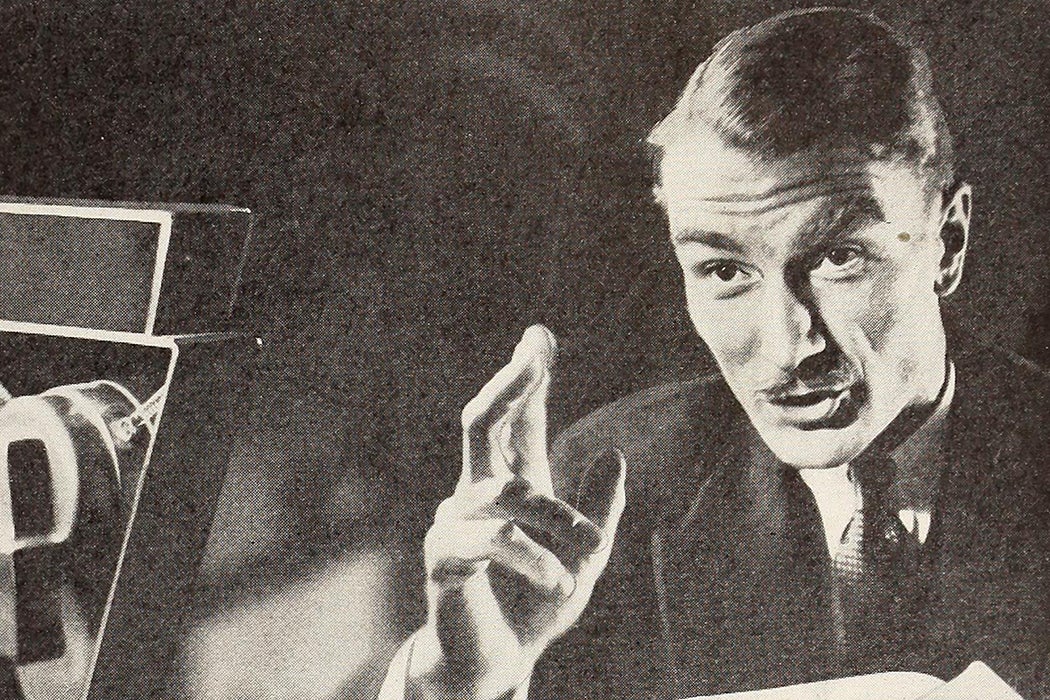 Since the early 1980s, Rush Limbaugh’s distinctively contrarian voice has filled the airwaves, earning him a devoted listenership and a seat at the conservative table. But he’s far from the first controversial contrarian to take to the airwaves. Historian David H. Culbert tells the tale of Boake “Croak” Carter, a radio personality so caustic, he got banned from the major news networks in the 1930s.

Carter’s early days are shrouded in mystery and exaggeration, writes Culbert. Harold Thomas Henry Carter claimed he came from a genteel British background. According to Carter’s story, he made it to the United States by the time he was in his early twenties and began working as a newspaper journalist.

He may have been a newspaper reporter, but radio was where Carter shone. After taking to the mic to describe a rugby match as if he were there, complete with faux crowd sounds, Carter realized he had a gift for gab. He changed his name to Boake Carter and began a career as a broadcaster.

Carter’s brash delivery and his disregard for the facts was beloved by listeners.

When Charles Lindbergh’s baby was kidnapped in 1932, Carter got his big break. He became popular for his non-traditional take on the news. Instead of just reporting, Carter commented, analyzing the news in roaring tones that offended his employers but riled up his listeners. He hinted that everything might not be what it seemed, ginning up public belief in conspiracies and corrupt politicians.

Soon, Carter had a devoted fanbase, most of whom were rural, Republican, low-income, and against the United States’ continued involvement in foreign countries.

Carter’s fans loved what they saw as his authoritative style and his habit of poking at the establishment. Franklin Delano Roosevelt’s New Deal administration, which often found itself in his crosshairs, did not. Carter stirred up crises and crusades that felt urgent to his listeners. Carter did best when he had a fragment of truth to go on, says Culbert, such as when he criticized the State Department for dragging its feet on an American citizen who had been imprisoned by the Nazis on suspicion of Communist activity.

Carter whipped his fans into a frenzy of support for the sailor, Lawrence Simpson, making up false information about his activities and creating the impression that a deep state was somehow endangering the American. (The seaman ultimately confessed to Communist activities.) He also embraced anti-Semitism.

Culbert paints a dramatic picture of Carter and his vocal mannerisms, which veered from a proper British accent to a unique jargon all his own. “Carter spoke at a tremendous rate of speed,” he notes. “Either the listener followed every word…or understood nothing.” The commentator had plenty of opinions, and was not above making up supporting information where there was none or pointing fingers at innocent parties to uphold his positions.

Carter’s brash delivery and his disregard for the facts may have been beloved by listeners, but the fact that he was purportedly delivering the news led to his downfall. In 1938, he was forced off the air by a combination of angry advertisers and irate administration members.

Though Carter eventually returned to the air, he never again regained his stature as the favorite fake news commentator of the right. Before his early death in 1944 at age forty-two, he became a member of a British Israelite sect and, in Culbert’s view, descended into insanity.

Influential enough to irk the president and inspire the love of thousands of listeners, Boake Carter is little known today. His power disappeared with the sound of his voice.