Are We Being Framed?

How the linguistic trick of framing shapes meaning–and can lead to deception. 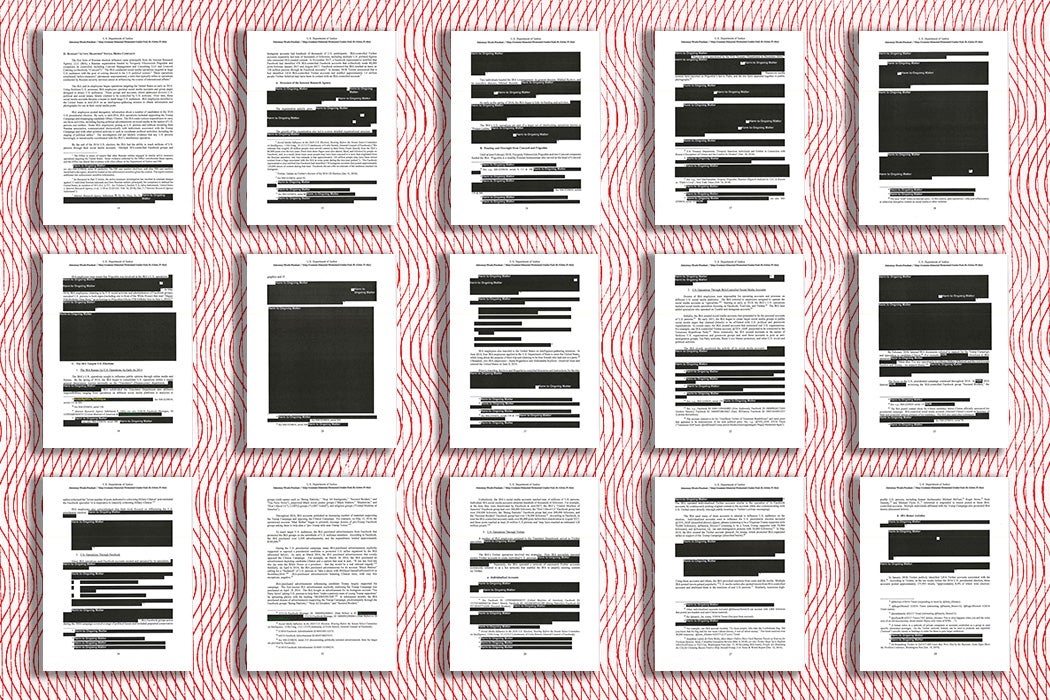 So the Mueller Report is finally out. President Trump has called it a “total exoneration,” but we don’t have to take his word for it. After special counsel Robert Mueller’s comprehensive, two-year investigation into serious allegations of Russian electoral interference, conspiracy, and obstruction of justice, we’re free to read what the special counsel’s findings actually are, if we so choose—albeit with a number of careful redactions from William Barr that along with his four-page summary, framed public conversations about the report in important ways.

As Christopher Bail explains in an article for Sociological Theory, administrations have an undeniable power to lead in the shaping of meaning, reality, and public debate.

The Social Concept of Framing

Call it spin, call it doublespeak, call it propaganda, call it taurascatic bullshit—in an age of growing distrust of big social institutions, from corporations to the government, many of us are quite aware of the social concept of framing a narrative, especially by those that wield power. Framing affects how listeners view reality. It can persuade us one way or another by using certain rhetorical or linguistic means. What’s more, a particular framing doesn’t just arise spontaneously to the top of the public consciousness from its own legitimate merits, because it happens to be the neutral truth. We would be naive to think so, yet many people do. When it comes to the power of states, in sociologist Christopher A. Bail’s view, it has to be knowingly crafted, with two realities. One is a front stage presentation for public consumption and the other a secret collective coordination behind the scenes. Their reality becomes your reality, one way or another.

Perhaps fewer people really understand that when it comes to language itself, just the act of speaking is not “transparent and innocent” as many people believe. We don’t say exactly what we mean, we naturally frame our language and make linguistic choices, even unknowingly, that reflect how we see the world. Using language is rarely just neutral. It’s often meaningfully leaky. Even black box redactions don’t necessarily always hide all the information, which can sometimes be inferred from the surrounding context. We may think we get plain meaning from only the words in a language, or that lexical, literal meanings are really what words are all about.

But this is not actually how we use language. Language use fundamentally involves questions of people’s relationships to each other and of power based on what we know about each other—the power to craft certain illusions of reality and have others fall in line with our views of the world. Language, leached of meaning or detached from reality, can become a kind of lie. Using the right kind of language, we can even make some listeners believe certain things that aren’t so—sometimes just by telling the literal truth.

To Dwight Bolinger, “literal truth—the kind one swears to tell on the witness stand—permits any amount of evasion.” He explains: “The most insidious of all concepts of truth is that of literalness. The California prune-growers tell us that prunes, pound for pound, offer several times more vitamins and minerals than fresh fruit; literally true. The oil industry advertises that no heat costs less than oil heat, which has to be true because no heat costs nothing at all.” Those savvy enough to see through it will simply eat fewer prunes and heat their homes differently to those who fall for it. But declaring that you didn’t lie but told the literal truth in this way seems a kind of hollow ethic, a careful weaselling around the words that some lawyers seem particularly adept at.

So, yes, it’s perhaps literally true that no collusion was found by Mueller’s team because they weren’t actually investigating collusion, but a much harder-to-prove charge of criminal conspiracy. Collusion and conspiracy may be related, but they’re not the same. Yet in the resulting media commentary, this framing by the Trump administration was largely successful in amplifying the confused conflation of two separate concepts: One is the fact that Mueller did not ultimately find definitive proof that the Trump campaign illegally conspired with Russia; The other is the non-legal Trump talking point of “no collusion,” even though not finding something is certainly not the same as there being none (at least you would hope so, if you ever can’t find your house keys or wallet).

Barr’s full-throated defense of Trump is centered on language, not in refuting the evidence of his actions. It’s a leapfrogging interpretation of language, seemingly empty of actual meaning, ethics, or the facts and evidence in the case. Barr edited Mueller’s words out of their original context and in some cases made calculated leaps in his wording that implied Mueller’s opinions aligned with his. He justified his right to do as he chose by framing the report, once it had been delivered, as his “baby.” By taking precise legal wording and translating it rather loosely but plausibly into colloquial speech for a wider audience, Barr was able to manipulate and frame the resulting discussion at the crucial moment for a news-hungry media to broadcast. The media amplified his framing, together with a confusion of opinions in the absence of an actual report to report on. It seems to have done the trick, what it was meant to, despite some of us being aware of the man behind the curtain and the cracks in his interpretation. This is because Barr is talking directly to and for a particular audience, those who already align with his views, not everyone who happens to be listening to him. The reframing of otherwise bad news for a certain group only has to satisfy and make sense to those likely to support them, not convince their antagonists.

This is not news to lawyers, because this is what lawyers do to convince people to see reality their way: gaming language. Robert Shuy discusses a study done on eyewitness recall (of a car collision on film) in which a lawyer’s question phrased like: “About how fast were the cars going when they smashed into each other?” got witnesses to report much higher speeds than the phrasing “About how fast were the cars going when they hit each other?” A week later, those who had been asked the first question reported they’d seen broken glass twice as frequently as the other group, even though the film showed no broken glass at all. So the linguistic choices lawyers make can have a major impact on people’s beliefs and memories, for good or for ill.

The Game of Language

More and more, the law is basically a game of language. Words used for legal purposes do need precise definitions and interpretations in order for anyone to be able to decide how laws can be justly applied. But it also matters how one arrives at this linguistic understanding. The linguistic decisions made by legal professionals, unlike a crossword or even cross words from a judge, can result in people being punished, incarcerated, or killed… or perhaps escaping any kind of consequence for offenses they clearly did commit.

Despite working closely with language in ways that can profoundly affect people’s lives, many lawyers and judges are remarkably ill-informed about language, as law scholars and linguists have pointed out. Legal language researchers such as Edward Finegan have cautioned that increasingly, judges seem to have decided court cases by just looking up a dictionary and cherrypicking certain meanings over others that suit their purpose.

One such case is Muscarello v. United States, from 1998. The law was that anyone caught using or carrying a firearm while selling drugs (presumably on their person) would get an additional five year sentence. The defendant, Muscarello, had a firearm that he was actively not carrying because it was actually locked up in the glove compartment of his truck. Nevertheless this was redefined as “carrying” a firearm, because the judge in the case saw that one of the first definitions in a dictionary for the word happen to be in relation to “carrying” (i.e. transporting) things in vehicles.

Not all judges seem to be aware that dictionaries are not authorities from on high set in stone, but written by fallible people carrying, if not deadly weapons of words, at least their own agendas and beliefs. Submitting to the authority of a dictionary to decide a case absolves judges of a moral responsibility. But dictionary entries can be framed, too. Words and meanings change over time, so it matters what edition and what kind of a dictionary a judge consults, for example. Word senses may be ordered in different ways, so it can’t be assumed that the first definition is the most basic. Nor can a random definition just be picked as evidence, without taking into account the context that the meaning is used in. These are all fairly simple and obvious features of dictionaries that are frequently overlooked in legal contexts, just when it matters most that careful and ethical consideration should go into the linguistic interpretation of the law.

The Question of Linguistic Ethics

According to Bail, it’s crucial revelations of clandestine coordinations that can abruptly question the authority of the public framing that an administration has crafted to tell a more positive story about its own actions and policies. These revelations can take the form of the Mueller report or information leaks from whistleblowers such as Daniel Ellsburg and Edward Snowden. The more administrations try to adjust their framing to account for this new information and justify their suddenly revealed behind-the-scenes secret dealing to the public, the more their discourse starts to disconnect from reality, contradicting past framing, resulting in a even greater need for secrecy and deception.

If we don’t pay enough attention to linguistic ethics, language and the truth that it seems to tell can be subtly manipulated to misdirect us. Even the most precise legal wording of a thorough report can be misread, as long as the public is willing to allow it. 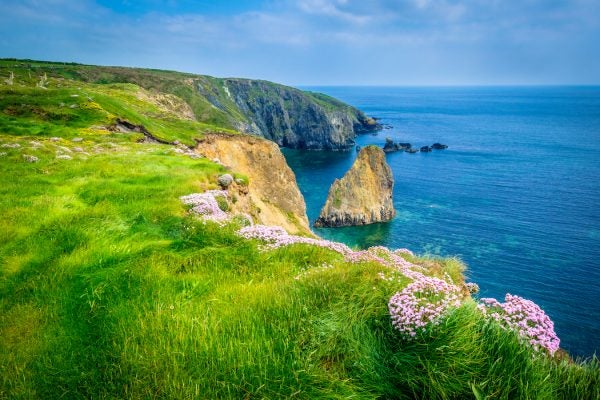 When Language Started a Political Revolution

Will Brexit fracture the UK? Ireland, for example, has its own cultural identity and language, which are perhaps more linked to Europe than to England.