Are Polar Bears Altruistic or Just Bad At Math?

Polar bear mothers are known to adopt and raise cubs from non-related litters. Why do they make a multi-year commitment to do it? 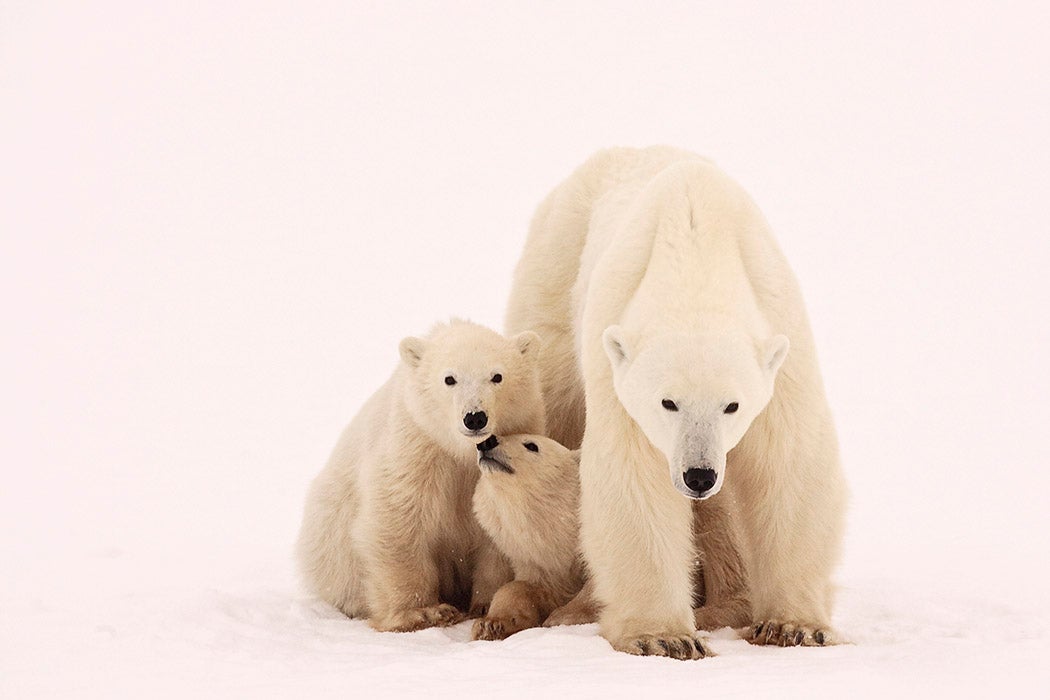 In the 21st century, most mentions of polar bears conjure images of stranded bears, on exposed beaches or drifting ice sheets as glaciers melt away into the ocean. The harsh conditions of the rapidly-changing Arctic don’t make it easy for animals to raise the next generation of youngsters, and raising a polar bear cub is a lot of work.

Polar bear moms must build a snow den in the fall, where they will stay, without food or water, to give birth and care for their newborn cubs through the winter. Polar bears usually give birth to litters of one or two cubs, and about 70% of cubs will survive–although this number is declining closer to 40% over time. In the spring, mom and cubs will emerge from the den, where she will spend the next 2.5-3 years showing them the ropes of Arctic living. Given this significant investment in her cubs, it’s surprising to find that polar bear moms will sometimes adopt additional cubs from another mother.

Many species care for young that aren’t their own, a natural phenomenon known as alloparenting or cooperative breeding.

This behavior isn’t uncommon throughout the animal kingdom–many species care for young that aren’t their own, a natural phenomenon known as alloparenting or cooperative breeding. In fact, some animals, like meerkats, are unable to raise young without the cooperation of helpers in the social group. Alloparenting most commonly evolves in group-living species, when individuals are highly related or very social. In these cases, animals pass on their shared genes by caring for more distant relatives or increase the chance of gaining reciprocal care for their future offspring. In this way, helpers benefit from their efforts, under the guise of a seemingly altruistic act.

However, polar bears do not meet any of these prerequisites for the evolution of alloparenting. They are solitary, live at low densities far from other groups, and raise cubs that impose a large energetic cost due to their prolonged care. So, why do they do it?

Western researchers have studied several populations of polar bears around the Arctic since the 1960’s, although Indigenous communities likely have traditional knowledge of polar bears that spans thousands of years. In this time, polar bears have been observed adopting a single unrelated cub into an existing litter, as well as adopting a litter of new cubs following the loss of their own cubs.

One possible explanation is that new moms gain valuable parenting experience through adoption, increasing the probability of success for a subsequent litter. But this doesn’t seem to be supported by research. The most likely explanation is that polar bears haven’t developed the cognitive ability to keep track of the number or identity of their own cubs. Solitary polar bears don’t cross paths very often, so it’s usually safe for a mother to assume that any cubs within an arm’s reach are hers… with the caveat that she won’t notice if one of her cubs has just wandered into the group and doesn’t belong. It’s also possible that mothers who have lost their own cubs recently are biologically predisposed to parenting, and will adopt any cubs that come her way as her own.

Either way, it looks like this curious case of cub adoption is just another example of an energetically costly mistake, rather than a heartwarming instance of altruism and concern. In the wild, it’s still every parent for themselves in the struggle to survive, and pass their genes to the next generation.