Freeing a prisoner—a gesture of generosity and benevolence—may have been a way to bring together a fractured spiritual community. 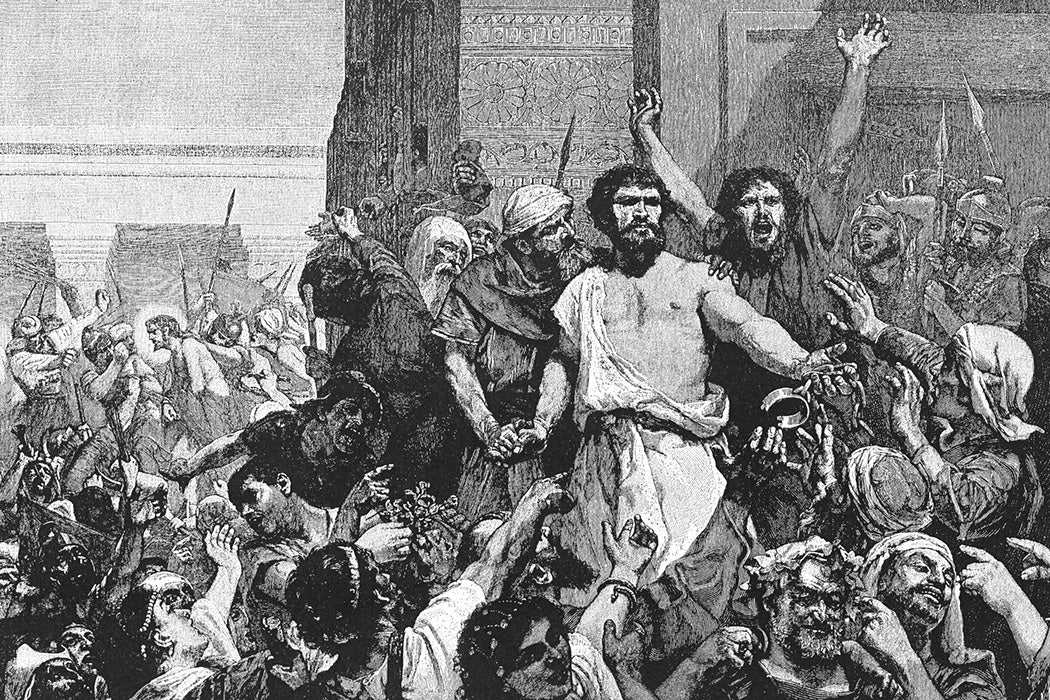 Passover, which begins on the 15th day of the Hebrew month of Nisan, honors the Israelites’ exodus from Egypt after four centuries of slavery. Because the Jewish calendar is a lunar one, Passover always falls on a full Moon, in March or April of the Gregorian calendar.

Over the centuries, Passover traditions have come and gone, with some persisting and others lost to time, leaving only the faintest of traces in historical texts. One such custom was the annual release of a prisoner. On the evening before every Passover during the Roman occupation of Jerusalem, Jewish leaders asked the Roman governor to free a single convict, who likely would have been a political prisoner. There is limited information about the practice during that time, but the late Rabbi Charles B. Chavel argued that it did not start during the Roman period. Or if it did, Roman leaders did not go out of their way encourage it.

“It is certainly not convincing to trace the beginnings of an important concession of that type to the initiative of the Roman procurators,” Chavel wrote, as this practice was not related to any Roman or Greek customs.

In the aftermath of the war, a prisoner release would be a powerful public relations move, making the Hasmonean dynasty look good.

Chavel also did not believe that this act of mercy could be traced back to Pagan rituals. It more likely started during the Hasmonean dynasty, which lasted from 140 to 37 BCE. The Hasmonean Civil War (67–63 BCE), a war of succession to determine who would be the next ruler of the Hasmonean Jewish Crown, had turned Jewish people against one another.

In the aftermath of the war, a prisoner release would be a powerful public relations move, making the Hasmonean dynasty look good if they could prove that they could be civil to one another after conflict. This act of Jewish unity would demonstrate that they could put their political differences aside for celebrating and honoring their Jewish ancestors—an issue still affecting Jewish families today.

“At that time, the Jewish prince, in order to placate the people who had assembled in the holy city from Palestine and from the Diaspora for the celebration of the Passover, released a political prisoner as a gesture of the peace and good-will that were to reign during the holiday,” Chavel suggested.

The Hasmonean Civil War ultimately led to Roman intervention and loss of Jewish control over Jerusalem and its surroundings.

“When the Romans took over Palestine,” Chavel explained, “it was thus a Jewish custom that they were forced to observe—a custom which insofar as its motive was concerned was also applicable to them.”

However, the fact that the Roman governor allowed this tradition to continue could be seen as a “token assurance from the ruling power” that Jewish people were allowed to celebrate Passover in Jerusalem, at least during that time period.