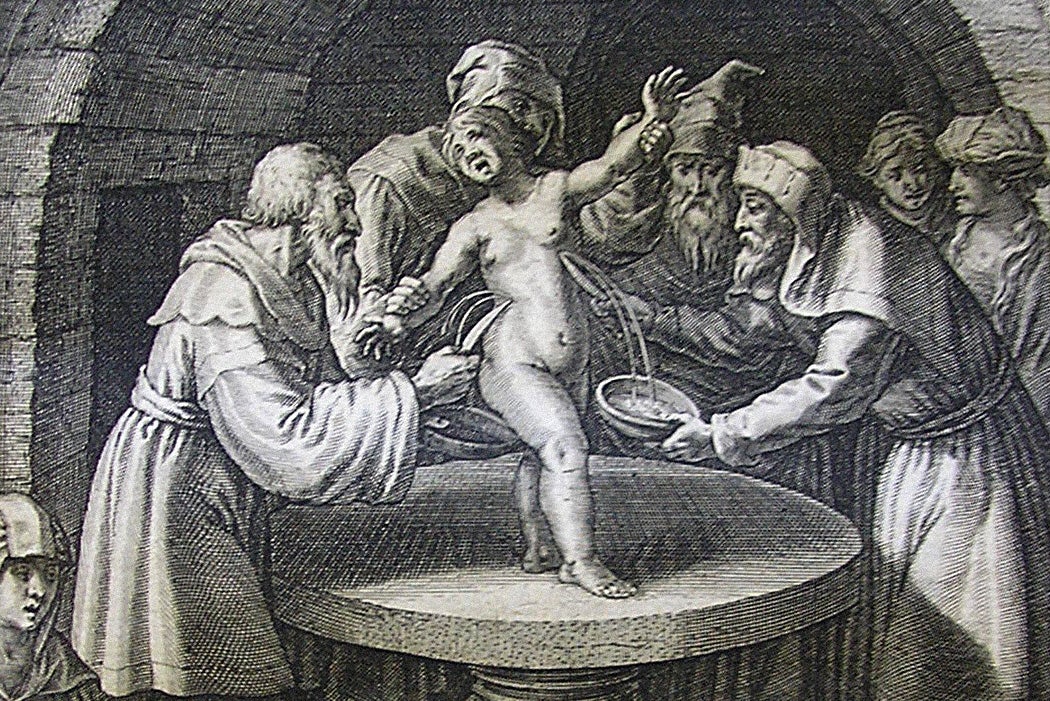 The ultimate conspiracy theory may be the blood libel, the anti-Jewish fantasy that Jews ritualistically kill Christian children. From the twelfth century to the twenty-first, the charge of “Jewish ritual murder” has been used as an excuse to persecute, torture, and massacre Jews.

A recent history by Magda Teter details the dissemination and persistence of this pernicious myth across the centuries. Media, starting with the printing press, have been key. Another recent book, The Accusation: Blood Libel in an American Town, tells the story of the charge in Massena, New York, in 1928.

Scholar John M. McCulloh also delves into the historical origins of the blood libel. It’s been widely accepted that Thomas of Monmouth’s hagiography, The Life and Passion of St. William of Norwich (1173), is the major source of it all. But McCulloh argues that he gets far too much credit.

Although the Crusades were aimed at Islam in the Holy Land, they also saw a concomitant explosion of anti-Jewish violence in Europe.

It is true that a twelve-year-old named William was murdered in 1144 in Norwich, England. The culprit or culprits were never found. It was Thomas, a monk, who years later took up the cause of making William a saint. To do this, Thomas needed to prove miracles and martyrdom. His accusation that Jews in Norwich crucified William during Easter was supposed to suffice for the latter.

As McCulloh notes, other scholars have argued that there were antecedents for the blood libel on the European continent before William’s death. Tales of Jews killing Christian children can be traced to the sixth century. Israel J. Yuval, for one, points to a pogrom in 1096 in the Rhineland during the mustering of the First Crusade. Although the Crusades were aimed at Islam in the Holy Land, they also saw a concomitant explosion of anti-Jewish violence in Europe.

McCulloh elaborates that “word of William’s supposed martyrdom had [already] spread to southern Germany before Thomas wrote his hagiography,” noting that this may even predate an 1147 iteration of the blood libel in Würzburg, where forces gathering for the Second Crusade “proclaimed as a martyr a man they alleged had been killed by the Jews.”

Perhaps the real question is why the blood libel was so readily accepted. As McCulloh notes, medieval Latin Christianity went through “broad and profound change” in the eleventh and twelfth centuries. These social and economic disruptions and transformations included “far-reaching developments in the relations between Christians and Jews.”

“Economic opportunities for Jews became more restricted; their legal status declined; they came to be regarded as enemies of Christ and the Christian religion. The appearance of the ritual murder accusation represents an important stage in the increasingly negative attitudes of the majority toward the minority.”

Well before William was “translated” (the word originally meant moving a body) to sanctified burial in the Norwich cathedral in 1150, the legend of his “crucifixion was well established.” Thomas of Monmouth didn’t invent the charge; he broadcast it—but not that far, since his book had only limited distribution.

Jewish Ritual Murder: William of Norwich, Thomas of Monmouth, and the Early Dissemination of the Myth
By: John M. McCulloh
Speculum, Vol. 72, No. 3 (Jul., 1997), pp. 698-740
The University of Chicago Press on behalf of the Medieval Academy of America