They shaped the history of Western philosophical thought. It’s past time to recognize their contributions. 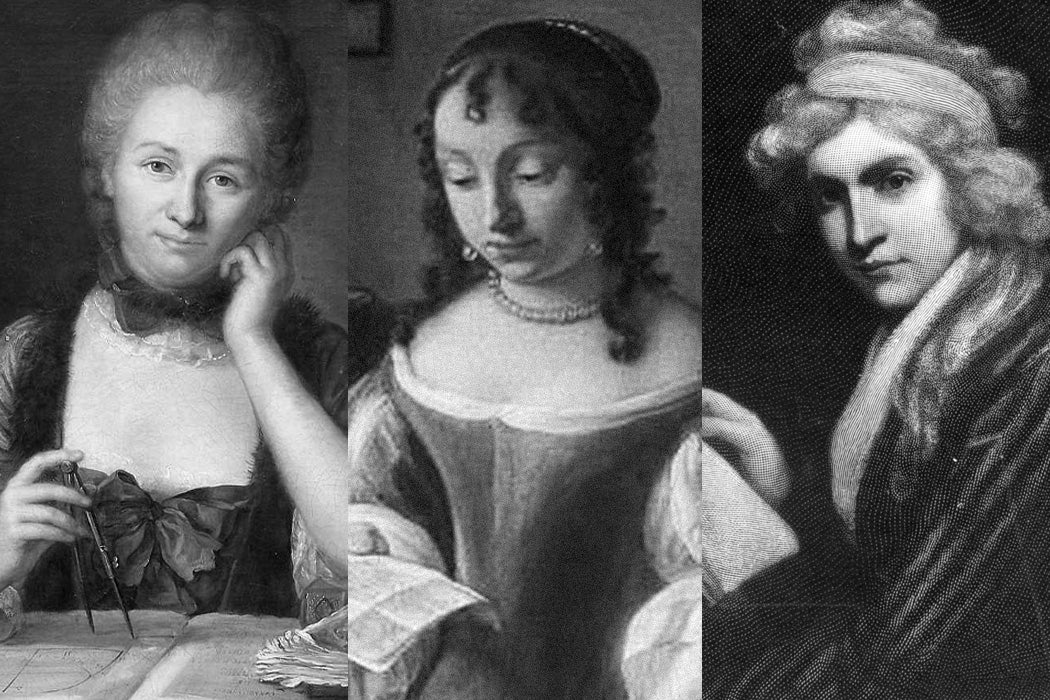 Emliie du Châtelet, Anne Conway, and Mary Wollstonecraft
via Wikimedia Commons/Getty
By: Elizabeth Winterhalter
6 minutes
Share Tweet Email Print
“This world has always belonged to males,” Simone de Beauvoir wrote in her 1949 book The Second Sex. The same, sadly, may be said of the canon of Western philosophy and of the composition of academic philosophy departments, even today. No online listicle can hope to form a complete (or really even adequate) accounting of the profound contribution of women thinkers in shaping the trajectory of the Enlightenment, perhaps especially not one written by me, yet another male philosophy graduate. Nevertheless, no history of Western philosophical thought would be complete without these three women.

Anne Conway’s Principles of the Most Ancient and Modern Philosophy is a highly original work and one well ahead of its time. Capturing Conway’s frustrations with Cartesian dualism, this treatise, originally published in Latin, describes a unique metaphysics that sees mind and body as inextricably commingled, with differences between them emerging only gradually or incrementally. One key quote:

Some philosophers have said that thoughts are not mental substances but merely states of or events in minds, which are substances; but I contend that thoughts are genuine creatures, each of its own kind, and that they have a true substance appropriate to themselves. These thoughts are our inner children, and they divide into masculine and feminine—i.e. they have body and spirit. If our thoughts didn’t have body, we couldn’t retain them or reflect on them. Why not? Because all reflection depends on a certain darkness, and that’s the body. Similarly, memory requires a body in order to retain the spirit of the thought; otherwise it vanishes, as a mirror-image vanishes when the object is removed. Thus, when we remember something, we see within ourselves its image, which is the spirit that came from it when we looked at it from the outside. This image, this spirit, is retained in some body which is the seed of our brain, and that is how a certain spiritual generation—as it were a spiritual giving-birth—occurs in us. Thus, every spirit has its own body and every body has its own spirit.

According to the philosopher Ruth Hagengruber, Gabrielle Emilie Le Tonnelier de Breteuil, marquise du Châtelet, was concerned with no less than “the re-examination of the Bible, the rewriting of Newtonian physics, and also with outlining a new methodology for philosophy and science.” An aristocrat married off to a marquis at the age of eighteen, du Châtelet was one of the few women schooled in calculus. She devoted herself to philosophical, mathematical, and scientific study, discoursing on physics and “natural philosophy” with Voltaire (who was her lover) and Gottfried Wilhelm Leibniz. (Voltaire apparently did not appreciate it when du Châtelet sided with Leibniz in their disagreements.)

Ostensibly seeking to provide instruction in physics to her three children, du Châtelet penned her magnum opus, the Foundations of Physics, which summarizes her philosophical views. Among other issues in fundamental physics, she took strong positions (that partially accord with Leibniz) on the nature of space, time, and creation:

if Space is a real Being and subsistent without Bodies that could be placed in it, it makes no difference in which part of this homogeneous Space one places them, as long as they keep the same order among them: therefore there would not have been any sufficient reason why God would have placed the Universe in the location where it is now, rather than in any other, since he could have placed it 10,000 leagues further away, and put the East where the West is; or indeed he could have reversed it, so long as he kept things in the same place in relation to each other.

Her philosophical program functions, Hagengruber writes, “as a critique of male gendered, nationalistic, and philosophical dogmatism,” and “she embraces observational experience against scholastic ‘fables and reveries’ concerning science and women. At the same time she points out that phenomena provide only one arbitrary set of circumstances and do not necessarily represent what must be the case.”

Mary Wollstonecraft, perhaps the best known woman philosopher of the Enlightenment, experienced firsthand the social upheaval that was the French revolution. She was in France during the beheading of Louis XVI and the Reign of Terror, a period during which she became (understandably) disillusioned with the Jacobins—and with their treatment of women. Far from reverting to conservatism, Wollstonecraft never lost sight of her philosophical aim of equality between men and women, holding true to her opposition to aristocracy, monarchy, and the authority of religion. Wollstonecraft’s famous rebuttal to Edmund Burke’s Reflections on the Revolution in France (1790), his stodgy defense of the established order, is her Vindication of the Rights of Men, which she styles as a letter to Burke himself:

In this great city, that proudly rears its head, and boasts of its population and commerce, how much misery lurks in pestilential corners, while idle mendicants assail, on every side, the man who hates to encourage impostors, or repress, with angry frown, the plaints of the poor! How many mechanics, by a flux of trade or fashion, lose their employment; whom misfortunes, not to be warded off, lead to the idleness that vitiates their character and renders them afterwards averse to honed labour! Where is the eye that marks these evils, more gigantic than any of the infringements of property, which you piously deprecate? Are these remediless evils? And is the human heart falsified in turning the poor over to another world, to receive the blessings this could afford if society was regulated on a more enlarged plan; if man was contented to be the friend of man, and did not seek to bury the sympathies of humanity in the servile appellation of master; if, turning his eyes from ideal regions of taste and elegance, he laboured to give the earth he inhabited all the beauty it is capable of receiving, and was ever on the watch to shed abroad all the happiness which human nature can enjoy;—he who, respecting the rights of men, wishes to convince or persuade society that this is true happiness and dignity, is not the cruel oppressor of the poor, nor a short-sighted philosopher—He fears God and loves his fellow-creatures.—Behold the whole duty of man!—the citizen who acts differently is a sophisticated being.

Editors’ note: An earlier version of this article featured an image depicting Anne Conway the poet (1661-1720) rather than Anne Conway the philosopher (1631-1679). The image has been updated.

Review: [Untitled]
By: Review by: Kenneth P. Winkler
The Philosophical Review, Vol. 108, No. 4 (Oct., 1999), pp. 585-587
Duke University Press on behalf of Philosophical Review
Cutting Through the Veil of Ignorance: Rewriting the History of Philosophy
By: Ruth Hagengruber
The Monist, Vol. 98, No. 1, The History of Women's Ideas (January, 2015), pp. 34-42
Oxford University Press
A vindication of the rights of men, in a letter to the Right Honourable Edmund Burke ; occasioned by his Reflections on the revolution in France.
By: Mary Wollstonecraft
Cowen Tracts, 1790