The charivari (or shivaree) was a ritual in which people on the lower rungs of a community called out neighbors who violated social and sexual norms. 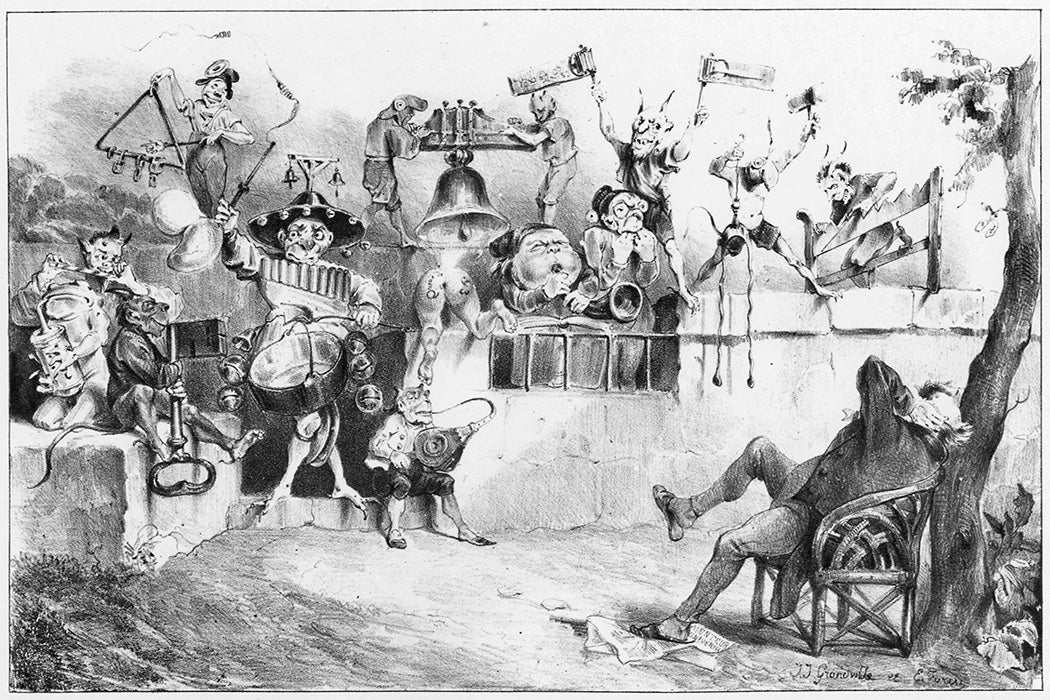 Whatever happened to the charivari? Also known as rough music, shivaree, and dozens of other names across several European languages, the tradition of charivari survived for hundreds of years until, basically, the police stepped in.

Charivaris were localized forms of enforcing moral standards, episodes of popular justice and social control. They were generally about family and sexual issues. Targets included men who beat their wives (and occasionally the opposite), adulterers, cuckolds, unwed mothers, and old widows and widowers who married much younger people. Historian Bryan D. Palmer looks at the North American versions of this boisterous practice during its last hurrah in the late nineteenth century.

There were different kinds of charivari, in both the city and the country, explains Palmer, but they all had things in common. “The demonstration was most often initiated under the cover of darkness, a party gathering at the house of the offender to beat pans and drums, shoot muskets, and blow the ubiquitous horn.”

Charivari was a way for poor and working people to enforce moral standards when the state didn’t.

Palmer calls charivari “one of the most persistent cultural forms known to scholars of popular customs and traditions.” Such “ritualized mechanism[s] of community control” date to the medieval period and were known throughout Europe and its American colonies. Sometimes, as in France before the Revolution, charivaris were avowedly political. French and British colonizers alike bought their traditional forms to the Americas. Palmer gives examples from French Canada and New Orleans, as well as Anglophone Canada, New England, the Middle West, and West of the United States.

“The custom,” Palmer notes, “often reflected essential social tensions.” A particular target was remarriage: an older, wealthier widower with a younger bride set the local lads off because she was being removed from the pool of her age-appropriate peers. Racism and antisemitism were also often the motivations behind “serenades” targeting free blacks and Jews. Prostitutes bore the brunt of “a vicious form of popular justice in the Quebec timberlands and American west well into the twentieth century.”

Sometimes charivaris were part of strikes, targeting bosses and strike breakers. Sometimes they were simply riots. But sometimes they could turn into excuses for vigilantism, lynch law, even murder. Indeed, “whitecapping,” a turn-of-the-twentieth-century phenomenon that Palmer argues replaced the fading charivari, sounds akin to Ku-Kluxery: hooded men riding at night to enforce local sexual and racial mores by a length of the whip.

Palmer notes that the charivari thrived outside the law, which was typically concerned with property relations only: “Domestic discord, appropriate marital unions, and immoral behavior were hardly the concern of the law,” except in extreme cases like “infanticide, incest or rape.” Wife beating, for instance, wasn’t a crime in all U.S. states until 1920.

Charivari (or shivaree, as it was largely known in the U.S.) was a way for poor and working people to enforce moral standards when the state didn’t. “In the absence of any recourse to law,” Palmer writes, “the lower orders turned instinctively to custom, posing the discipline of the community against the perceived deficiencies of legal authority.”

Little wonder such activities met with the enmity of the state and the church. The consolidation of state power, including formal policing and the growth of family law, made charivaris redundant.

The ritualized banging of pots and pans you hear today means something entirely different: a celebration of health care workers in the pandemic. And social order is now enforced by other means.