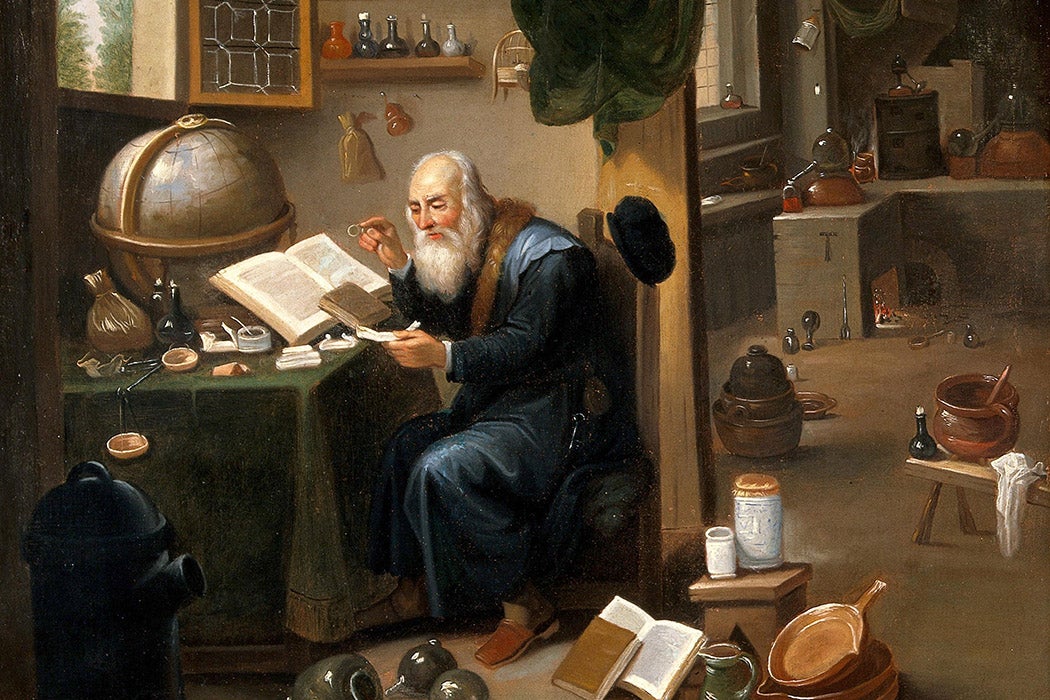 An alchemist in his laboratory. Oil painting by a follower of David Teniers the younger.
via JSTOR
By: Matthew Wills
4 minutes
Share Tweet Email Print

Alchemists deserve an “A” for effort. The transmutation of metals, or chrysopoeia (gold-making), was, writes scholar Lawrence M. Principe, “a serious and rational endeavor, undergirded by coherent theoretical and observational foundations, to understand the natural world and to make use of its powers.”

Such efforts were “pursued for a millennium and a half in various cultural, intellectual, and theoretical contexts.” The fact that chrysopoeia didn’t actually work taught the scientists-to-come a lot. In recent decades, Principe and other scholars have gone a long way to rehabilitate alchemy, often thought as something of a bad seed, in the history of science.

But, given alchemy’s long history, “how then to explain the disappearance of metallic transmutation from the normal operations and goals of chymists”? When, in short, did the pursuit of alchemy end? This ending was a major development in the history of chemistry, but it’s hard to pin down. Principe concentrates on the Académie Royale des Sciences in the eighteenth century: members pursued transmutation even as administrators tried to suppress it.

There was a real fear that alchemy, or rumors of alchemy, could undermine the state.

The Académie had been founded in 1666 by Louis XIV’s minister, Jean-Baptiste Colbert. Colbert prohibited two topics of study at the founding: astrology and the Philosophers’ Stone. Both of these were potentially subversive. Astrological prognostications—forecasts about the king’s health or coming war or famine—could threaten political stability. Making gold, or the possibility of making gold, could threaten economic stability. “The King does not wish it to be thought that his money is produced by goldmaking,” wrote a visiting Swedish chemist in 1692.

So there was a real fear that alchemy, or rumors of alchemy, could undermine the state. People might think, writes Principe, that “Louis XIV’s might and glory came not from military prowess or wise governance but rather from chemical labors in smoky laboratories.”

Additionally, there was simply bad odor about alchemists. On one hand, they were often figures of comedy, “ridiculed in literature, on the stage, and in the visual arts.” On the other, they had a more sinister taint, “associated with poisoners, counterfeiters, frauds.” When a trio of young royals all died between 1711 and 1712, the nearest alchemist was blamed: the Duc d’Orléan’s tutor, Wilhelm Homberg, narrowly escaped being Bastilled. (Before Homberg died in 1715, he was trying to turn mercury into silver “using an oil distilled from human feces.”)

Despite the official prohibition, metallic transmutation efforts continued underground in the Académie. In fact, they went on at least until the 1770s, “long after the widely accepted dates for the ‘demise of alchemy’ in learned circles.” It certainly continued after Étienne-François Geoffroy’s 1722 landmark paper, “Des supercheries concernant la pierre philosophale” (“Some Cheats Concerning the Philosophers’ Stone”), “most frequently cited by historians as marking the end of ‘alchemy’.”

Principe calls Geoffroy’s paper, notably read in public, “primarily an act of public relations.” It was a “statement of the Académie’s official views” and “a tacit renunciation of the work Geoffroy and his master Homberg had performed previously.” Nothing published by the Académie afterwards even suggested the possibility of transmutation. But Geoffroy’s own renunciation wasn’t complete: he was still “involved in the problem of chrysopoeia” afterwards.

A new divide arose between les vrais chemistes and les alchimistes, even though the former often had the latter as their teachers. The persistence of alchemical explorations might best be represented by Académie chemist Pierre-Joseph Macquer, who wrote: “Can one consider insane the person who labors for the Philosophers’ Stone only for the pleasure of resolving one of the most beautiful and most difficult problems in natural philosophy?”

But, as an unofficial pursuit, alchemy was left without open and outright defenders within the Académie. Principe writes that alchemists surrendered the debate “to those who ridiculed transmutation for their own, generally nonscientific, purposes.”

It didn’t help, of course, that alchemists never did come up with reputable, reproducible evidence of actually turning lead into gold, mercury into silver, or even a mishmash of metals into iron.

The End of Alchemy?
By: Lawrence M. Principe
Osiris, Vol. 29, No. 1, Chemical Knowledge in the Early Modern World (January 2014), pp. 96–116
The University of Chicago Press on behalf of The History of Science Society