Despite being barely edible, mulberries are all over our popular culture, from To Think that I Saw It on Mulberry Street to “Pop Goes the Weasel.” Why? In the early nineteenth century, mulberry trees became associated with economic prosperity and morally upright productiveness. This led to an enormous speculative bubble that popped disastrously, as Amy Chambliss wrote back in 1960.

Known as the ideal food of the silkworm, mulberries were important to American industry from the start. Even before the Revolutionary War, Georgians grew the trees and processed silk for the British Empire. But it was only after independence that the industry became a symbol of something more.

One early evangelist for silk was Ezra Stiles, who became president of Yale College in 1778 and immediately began urging his faculty members to plant an acre of mulberry trees for each of their children. Observing that silk culture had “ever claimed the attention of the best and most cultivated minds,” Stiles distributed mulberry seeds and silkworm eggs around New England. His diary, Chambliss writes, contained “frequent dartings away from academic matters to the latest developments in silk.” At Yale’s 1789 commencement, he wore a gown made from the silk he’d raised.

John Quincy Adams saw Mulberry trees as “placing the farmer on the same basis as the capitalist.”

Stiles was not a lone eccentric. Silk-raising had a strong popular appeal as light work that could turn women, children, and old or feeble people into productive household members, keeping them away from idleness and mischief.

“It could be carried on in orphanages, poorhouses, and institutions of correction, and thus cut public expenses and lower taxes,” Chambliss writes. “It supposedly gave a spiritual uplift to all engaged in it by reminding them of how much beauty comes into the world through a plain-looking worm.”

Chambliss notes that “practically every state north of Virginia” subsidized silk raising. In 1826, the federal Secretary of the Treasury issued a manual for the industry. A decade later, John Quincy Adams recommended increased silk production as a way to avoid excessive imports. Because mulberry trees grown from cuttings could quadruple annually, Adams saw them “placing the farmer on the same basis as the capitalist.”

By this time, mulberry trees were already turning into a speculative bubble.

“People who were inclined to go into the silk business anyway, after learning about state subsidies and reading the government propaganda, rushed to buy,” Chambliss writes. “Some speculators who got in early made 1,000 percent profits, others 500 percent.”

Mulberry trees quickly became a far more appealing business prospect than actually producing silk. Many trees changed hands four or five times before reaching a buyer who would introduce them to silkworms. By the late 1830s, young trees that had once sold for three to five dollars per hundred were worth 100 times as much.

The bubble burst swiftly with a credit contraction in 1839 that ruined some large operators and convinced smaller players to unload their trees as fast as possible. After a heavy freeze in 1840, followed by a blight four years later, the nation’s silk industry disappeared entirely. Echoes of that long-ago mulberry craze reverberate in the countless “Mulberry Streets” that dot American cities and suburbs. 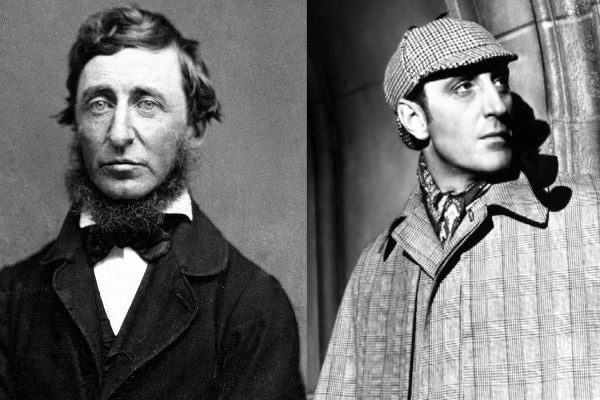 A tongue in cheek comparison between the British fictional sleuth and the American Transcendentalist author, just because.