From WWI to the 1950s, the “American Plan” rounded up sexually-active women and quarantined them, supposedly to protect soldiers from venereal disease. 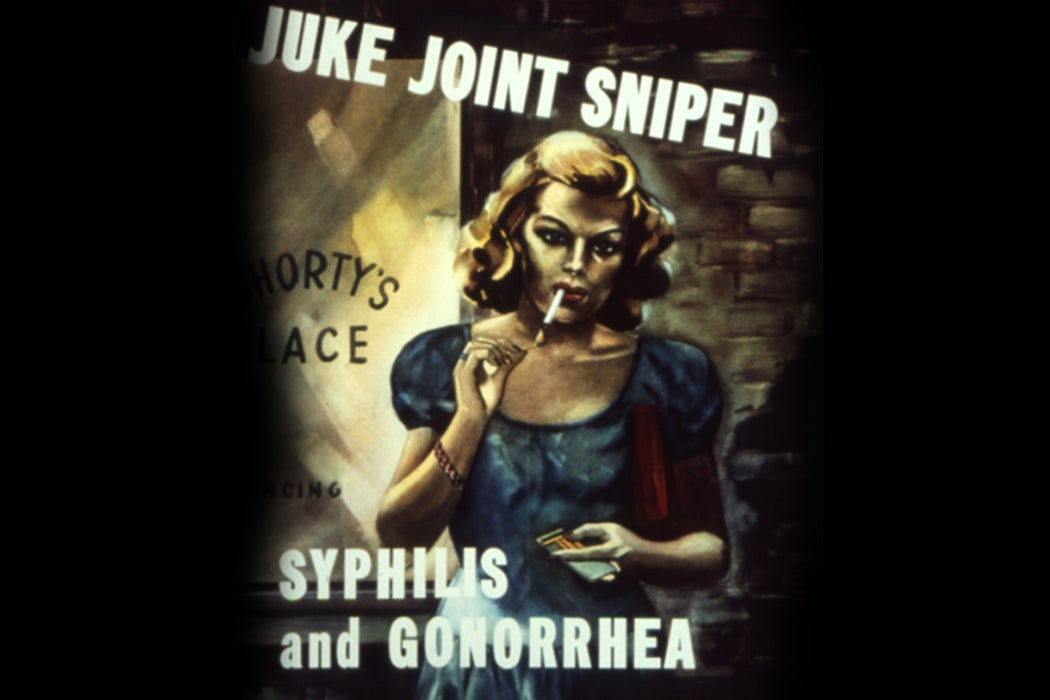 A new book by Scott W. Stern, The Trials of Nina McCall, sheds light on the United States’s incarceration of sexually-active women for “national security” purposes. From World War I to the 1950s, American women who had, or were suspected of having, venereal diseases, or who were merely considered “promiscuous,” were put into detention centers, reformatories, and quarantine in an effort to keep soldiers from contracting V.D. Both federal and state authorities implemented this “American Plan.” Women were often subjected to invasive examination and forced treatment for sexually transmitted infections with toxic and painful arsenical, mercury, bismuth, and silver compounds.

Historian Karin L. Zipf profiles North Carolina right after World War I, when state authorities and the U.S. Army combatted what they perceived as a “girl problem.”

Men were assumed not to be carriers of sexually transmitted diseases like syphilis. Women were blamed and punished accordingly.

Before World War I, Zipf writes, soldiers and military bases had a reputation for “immorality, vice, theft, and profanity.” With the war, progressives attempted to “shore up the health, efficiency, and manliness” of the nation’s fighting forces, many of whom showed up at induction centers with syphilis and gonorrhea. There were 80,000 cases of V.D. recorded by the Army between September 1917 and June 1918.

Zipf notes, however, that:

gender and class-based anti-prostitution and venereal disease control laws…reinforced a sexual double standard, one that acknowledged the sexual impulses of men while it repressively punished women, particularly those at the lowest economic rung.

The campaign ended up targeting not the men who visited sex workers, but rather young women and girls—some were even pre-teens—most of whom were poor and non-white.

In a pre-penicillin and still very Victorian-influenced era, men were assumed not to be carriers of sexually transmitted diseases like syphilis. Women were blamed and punished accordingly. Zipf quotes a social hygienist who said: “It is generally recognized that a bad and diseased woman can do more harm than any German fleet of airplanes […].”

The American Plan was still going strong during World War II, when “rapid treatment centers” were set up to quarantine women. Medical historian John Parascandola describes how by the middle of 1944, there were fifty-eight of these centers; 74,946 cases of syphilis were admitted in 1945.

Parascandola notes that mixed messages were sent to soldiers: sex workers were also recognized as “morale builders” for the troops; one doctor at the Public Health Service coined the term “patriotute” for the “patriotic prostitute” (terms widely used at the time).

Of course, not all of the women rounded up were sex workers. Some were merely sexually active. Some didn’t even have any sexually transmitted infections to be begin with. But the panic was such that girls and young women could be taken in simply for being outside without adult supervision.

Parascandola reminds us that during a time when the federal government incarcerated tens of thousands of Japanese Americans, “it is perhaps not surprising that these same officials were also willing to resort to detaining and forcibly treating women who were deemed a threat to the war effort.” He notes that regardless of these incarcerations, rates of “syphilis and gonorrhea continued to be a significant problem among the military and civilian populations in and after World War II.”

The last “rapid treatment centers” to quarantine women were closed in 1953.