What Should We Do about Our Aging Prison Population?

Can compassionate release laws solve the problem of the nearly 200,000 people aged 55 and older who are incarcerated in America? 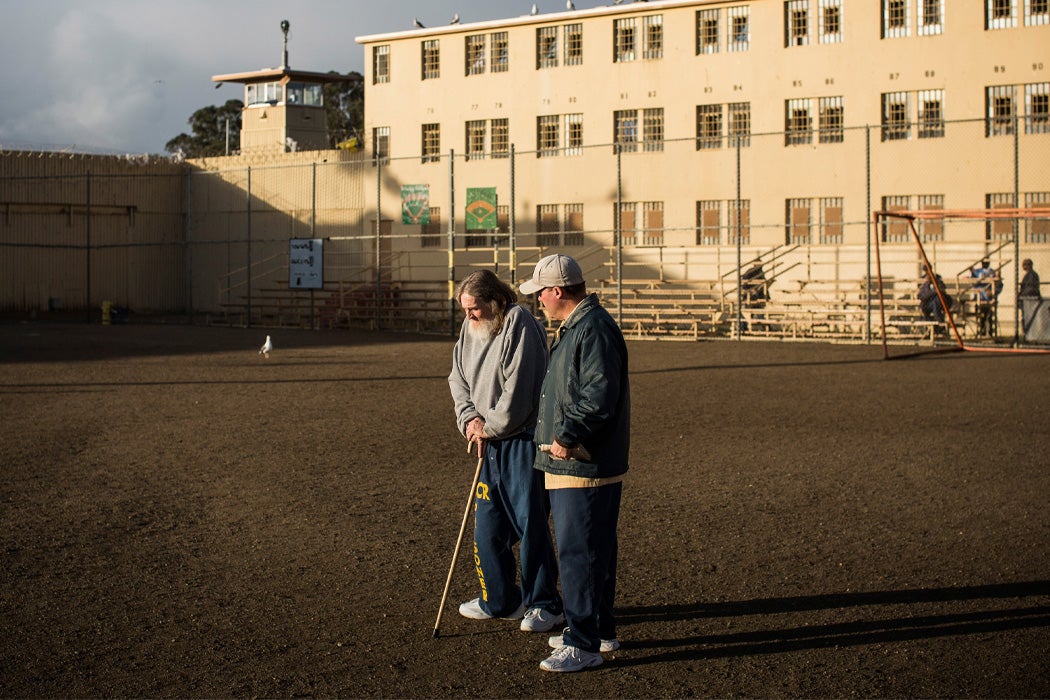 In the U.S. today, more people are dying of old age in prison than ever before. American prisons, in other words, are holding a swelling population of elderly inmates. According to Bureau of Justice figures from 2017, nearly 200,000 people aged 55 and older are incarcerated in America.

It doesn’t have to be this way. A policy option called “compassionate release” grants sick and elderly inmates a chance to spend their final days outside of a prison cell. First implemented in the 1970s, all 50 states except Iowa currently have some kind of related law, although policies between states vary widely. Some, like California and Maryland, distinguish between “geriatric release,” which is age-dependent, with “compassionate release,” which offers early release for inmates who are ill.

Of the 1.5 million adults currently in state and federal prisons, the 55+ demographic represents roughly twelve percent, which represents a 300 percent spike in the elderly population since 1999. In the six years between 2001 and 2007 alone, 8,486 people over the age of 55 died behind bars. And the problem is only intensifying. By 2030, the number of elderly prisoners is expected to reach 400,000—an alarming 4,400 percent increase since 1981, according to a 2012 report from the American Civil Liberties Union (ACLU).

Christie Thompson, a reporter for The Marshall Project, tells the story of Anthony Bell, a man serving his last year of a 16-year sentence for selling cocaine. Bell applied for compassionate release in 2014, after suffering from liver failure and lupus. “The Bureau of Prisons denied his request in April 2015, saying he had too long to live,” Thompson writes. “He died two days later.”

In order to be granted compassionate release, inmates must submit an application to the Bureau of Prisons. But it’s not likely to be granted. The Bureau received 5,400 applications between 2013 and 2017, of which it approved only 6 percent (or 324). The Marshall Project reviewed the denials, exposing the reality that doctors and wardens were often overruled in their support for compassionate release.

Harsh sentencing laws with mandatory minimums from the 1980s have been responsible for a spike in the prison population, according to Tina Maschi, a Fordham University professor and former prison social worker who studies aging prisoners. Maschi, who has written a report on the subject, calls the laws “more punitive.”

Emily Bazelon, a staff writer at the New York Times Magazine, has been reporting on the problems with mass incarceration for years. She focuses on how to reform the ways that people enter the prison system and the power of prosecutors. Her latest book, Charged: The New Movement to Transform American Prosecution and End Mass Incarceration, exposes a complex and often unjust prosecution system. It also touches on the long-term effects of prison on mental and physical health. Bazelon calls the laws from the 1980s “Draconian.” And these laws have meant that the same population that was locked up nearly 40 years ago is aging behind bars.

“Does continuing to imprison them serve anyone’s interest?” Bazelon asked.

Bazelon spoke to me on the phone and said that compassionate release is “part of the [prison reform] movement that includes clemency and commutation.” It also fits into “second-look sentencing,” which reevaluates prisoners based on how much of a threat they pose today. “Does continuing to imprison them serve anyone’s interest?”

There’s been a more recent shift, Maschi said in a phone interview, toward exposing problems in the criminal justice system and demanding reforms. When Maschi first began researching, she says, few people were talking about problems associated with keeping older adults locked up. But now, it’s caught on, Maschi said, thanks to a younger generation that “gets the agism part of it.” The public momentum, she said, highlights how the issue relates to the intersection of justice, aging, health, and social systems. “It affects everybody,” Maschi pointed out. “Both victims and offenders.”

Aging inmates require increasing levels of care, and also carry a significant cost to the prison system, in the neighborhood of $16 billion a year, according to the ACLU. Reducing prison sentences in Maryland saved $185 million over five years. “It’s hard to say exactly how much we’re spending keeping the elderly and sick locked up,” Maschi told me. “But it costs $68,000 a year to keep an aging person in prison, whereas it’s only $22,000 for a younger person.”

On top of the economic costs of incarceration, there are the physical tolls. There are a number of reasons why older adults may be particularly at risk for illness while serving time, as Cindy Snyder and colleagues noted in the journal Social Work. First, they may be in worse health on entering prison. In addition, many inmates experienced high levels of trauma and stress before prison, as Maschi noted in the same journal. This exposure to trauma and stress makes them more vulnerable to illness. Also, roughly 50 percent of prisoners reportedly suffer from mental health issues, according to the American Psychological Association.

“Prison conditions can be very harsh,” Bazelon told me. “The American system of incarceration is not one that offers a lot of opportunities for people to improve their lives. It’s more about punishing people. As they grow old, we have to continue to reckon with that.”

Because of poor healthcare services in prison, many are not treated for conditions they suffer from when they arrive. Noura, from Memphis, Tennessee, was released from prison after she was deemed innocent. According to Bazelon, she went to prison with endometriosis, a serious condition involving the tissue in her ovaries, which required treatment. Because of the lack of treatment in prison, Bazelon says, she has experienced “significant health problems that she’s still dealing with.”

“She’s in a much worse condition than she should be,” Bazelon said. “If you have that kind of potentially debilitating medical condition, that’s a real cost to bear afterwards.”

Beyond physical tolls, there’s the cost of social isolation and depression. Maschi worked conducting research in prisons for years, and was struck by the loneliness of prisoners, which was an even more severe problem for older adults, who could be more socially isolated. Bazelon also observed the “agony of being separated from family and community” among older prisoners she interviewed.

Older adults in prison, Bazelon said, “do the best they can and build a life within the walls. but it can be tremendously difficult.” The research bears this out: A 1994 study showed that older adults exhibited anxiety, fear, depression, and shame after spending time in a maximum-security facility.

And spending more time in prison compounds the physical tolls. Maschi began working with older adults in prison to see how the impact of incarceration magnified over time. She had initially wanted to conduct longitudinal studies with younger prisoners to better understand how the trauma of prison impacted the well-being of prisoners. But then it dawned on her: She could do the same thing by looking at the experiences of older prisoners, retrospectively.

When Is Compassionate Release Appropriate?

Some lawmakers are against providing compassionate release. Many make the case that those in prison are a threat to society. Or that they should pay their dues. But the threat is low. When 200 older adults were released early in Maryland, the rate of recidivism was only 3 percent, which is vastly lower than the national average of approximately 66 percent.

“How much do we want to pay for our fear of crime?” Maschi asked. “[Some people] would rather go broke with every tax dollar.”

Even once compassionate release is granted, it can be tough for former inmates to find places to go.

There are a variety of issues to consider, of course, that bear on whether to grant prisoners compassionate release. Bazelon believes that when prisoners are granted compassionate release, the victims and families––who are often mistreated by the system as well––should be notified out of respect. “Even if it’s years later, people tend to still care,” she said. Maschi agreed, highlighting the importance of being “empathic to everyone else’s experience.” In New York State, a victim impact statement is a built-in feature of the policy.

But even once compassionate release is granted, it can be tough for former inmates to find places to go. They may not have families or friends to take them in, and in some hospital settings, “even if they’re dying,” Maschi said, “they can be denied treatment.”

In 2017, Connecticut’s 60 West nursing facility became the country’s first program to transition the aging and terminally ill who were granted compassionate release to a nursing home––to earn federal funding. It became a role model for other states –– Kentucky, Michigan, and Wisconsin have considered similar programs, and some states are looking into other options for seniors. Maschi said that this example is very important because it “opens the doorways to make [treatment] acceptable.”

Now, state lawmakers in Pennsylvania have a similar bill in the works, based on the Connecticut model

A New View of Compassion

Maschi believes that evidence-based policymaking is desperately needed––and currently lacking––in the effort for prison reform. “What is the cost-benefit analysis?” she asked. “How many people applied for compassionate release, and how many got it?” She also sees the monitoring of these programs as critical. With these answers, she believes it will be easier to convince politicians, and constituents, that compassionate release is not only intrinsically valuable, but will yield a savings for taxpayers.

Bazelon said that compassionate release is a way to reevaluate who belongs in prison. Another way would be to reassess the original crime. A third way would be to see who has demonstrated exemplary behavior while in prison. Bazelon sees compassionate release as a way to focus on those who are sick—and not a safety threat. “Can we just have an American conception of mercy in which we let people go home when they’re sick?”

The philosophy called “therapeutic jurisprudence” urges us to consider the fairness of the original sentencing. “When we created these laws to make safer communities,” Maschi said, “they did not consider the unintended consequences of having a moral, financial, legal, social structure that is decimating communities––especially communities with a lot of black men.” And as Kristin Turney and Rebecca Goodsell noted in the journal The Future of Children, parental incarceration contributes greatly to inequality among children.

“When somebody’s about to take their last breath,” Maschi asked, “do we really still punish them?” 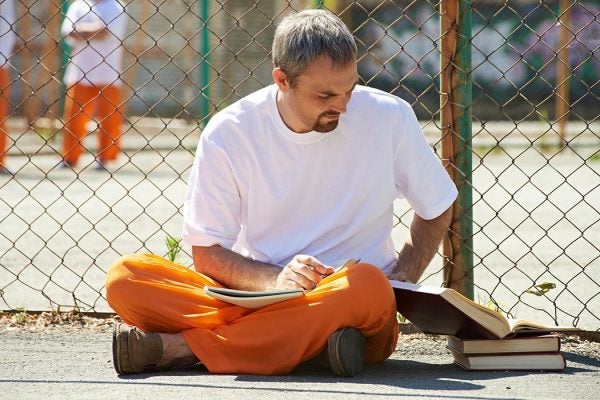