In the Victorian era, a different kind of ghostwriting became popular—largely because it allowed men to take all the credit. 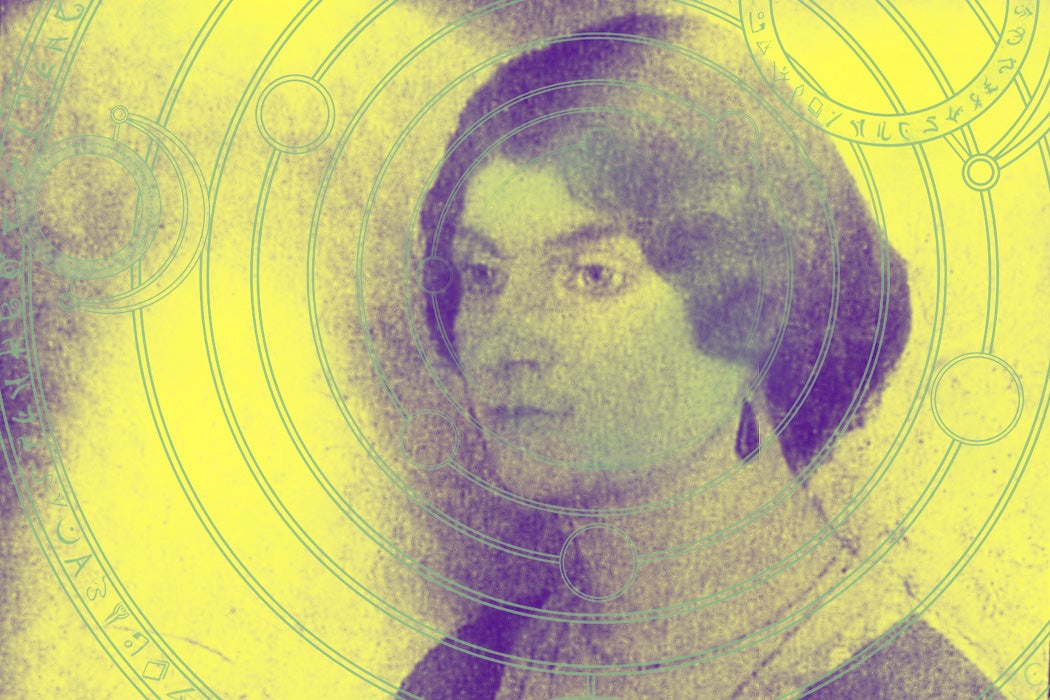 Deep in the birches and oaks of Ashdown Forest, William Butler Yeats and his new bride Georgie Hyde-Lees were having a miserable first few days of marriage. A.A. Milne would later turn the same Sussex forest into the cheerful Hundred Acre Wood, but the mood on the Yeats’ honeymoon in 1917 was as gloomy as a funeral with Eeyore.

The newly married Yeats—famous for lines like “Things fall apart; the centre cannot hold” and “I will arise and go now, and go to Innisfree”—was also the newly twice-rejected Yeats. Georgie was his third in a series of quick-fire marriage proposals that began with his longtime obsession, Maud Gonne. Maud rejected it. He followed up with a boomerang proposal to, of all people, her daughter, Iseult. Iseult rejected it. Like a whack-a-mole, Yeats bounced back. “You are certainly in a muddle,” Yeats’ friend Lady Gregory replied when he wrote that he planned to see if his friend Georgie, 27 years his junior, would make the third time the charm.

Playing on their mutual interest in spiritualism and the occult, George tried a novel approach to saving her marriage.

Mere days into their honeymoon at the Ashdown Forest Hotel, Georgie (renamed George by her husband) must have had a ghostly suspicion—or perhaps simply seen the poorly hidden fact—that Yeats was still writing wistful letters to Iseult. Another newlywed might have told Yeats to take a long walk into the Lake of Innisfree. Instead, playing on their mutual interest in spiritualism and the occult, George tried a novel approach to saving her marriage.

“On the afternoon of October 24th 1917, four days after my marriage,” wrote Yeats, “my wife surprised me by attempting automatic writing. What came in disjointed sentences, in almost illegible writing, was so exciting, sometimes so profound, that I persuaded her to give an hour or two day after day to the unknown writer.” Automatic writing, where, according to believers, a spirit guides the pencil of a living medium as he or she writes out the spirit’s message, wasn’t unheard of at the time. Starting with Victorianism, and resurging after a generation perished in World War I, spiritualist experiments to communicate with the dead via table turning, tarot, séances, and the occult had fascinated western society. George’s new husband was one of the fascinated. Throwing away his correspondence with his former flames, Yeats’ became obsessed with his new wife. He now had a live-in medium.

The clairvoyant couple were inexhaustible. In their first three years together, they averaged three automatic writing sessions a week, creating 4,000 pages of material dictated by the spirits through George to her husband. Conveniently, the spirits got to work extracting Yeats from his obsession with Maud and Iseult. Their advice didn’t end there: They suggested he switch to a healthier diet, hinted when George was ovulating so the couple could have a baby, and offered helpful suggestions on how Yeats could make sex more enjoyable for George.

Most importantly, the spirits provided Yeats with raw material for his poems. All of it was from George’s pencil. It took decades for Yeats scholarship to state the obvious: “We are having to take an extraordinary fact into far more serious consideration than we have before,” wrote Margaret Mills Harper in 1988. “Much of the literary output of one of our century’s major poets from the year of his marriage on was directly influenced by a unique imaginative partnership with a highly creative woman.” George’s supernatural writings were eventually published in a book called A Vision. Yeats’ name was the only one on the title page. In at least seven editions of A Vision, George has never been credited as a co-author. Yeats did offer to dedicate a later edition to her. “To my wife,” the proposed dedication read, “who created this system which bores her, who made possible these pages which she will never read…” George rejected it.

George wasn’t the only spiritual collaborator to be cheated of proper coauthor credit for her writing. “It is now five years since the great gift of inspired writing first came to my wife,” wrote Sir Arthur Conan Doyle in the introduction to a collection of his wife’s automatic writing, Pheneas Speaks. “The sentiments expressed by no means represent those of the Medium or of myself.” Lady Doyle at least got a dedication acknowledgement. Charles Wentworth Littlefield’s medium for The Beginning and Way of Life was not so lucky. Littlefield thanked St. Paul and St. John for dictating the text but did not mention the medium who took dictation from the departed.

Under the halo of the séance spotlight, women wrote pages of automatic writing filled with rich narrative, character, and dialogue.

This terrible lack of credit is unsurprising given that, in the heyday of spiritualism, many mediums were women. The high percentage was predicated on the Victorian reasoning that the passivity of women made them the perfect empty vessel through which spirits could transmit their messages, argues the Victorian literary scholar Elana Gomel in a 2007 article for Victorian Literature and Culture. As the spiritualist movement became less socially taboo, it attracted women who were educated, well read, short on opportunities to flex their creativity, and locked out of “legitimate” creative spaces like publishing. In other words: aspiring authors.

Under the halo of the séance spotlight, women wrote pages of automatic writing filled with rich narrative, character, and dialogue. A publishing industry sprang up in response to the public’s appetite for ghostwriting, ranging from memoirs of pirates to murder mysteries. Often, it was the wealthy clients or male family members listening to the séances who published the materials. Routinely, the medium’s authorship was not credited. That is, until one medium turned the tables on table turning and took the issue to court. In doing so, she changed copyright law forever.

In July of 1926, a year after the first printing of A Vision reached six hundred private subscribers, the spirit medium Geraldine Cummins hauled Frederick Bligh Bond into the Chancery Division of the High Court of Justice. In several spirit sessions attended by Bond, Cummins had used a pencil to automatically scrawl out, at 2,000 words an hour, the text of The Chronicle of Cleophas. It was anticipated that the book would be lucrative. Bond had attempted to publish the book, arguing that he was the recipient of the messages. Also, he added, Cummins “could not have produced the work if he had not cooperated by placing his hand on the back of hers during the writing.”

Cummins slammed his paranormal argument with a legal one. Who owned the copyright to the story? The medium, the spirit, or the listener who paid for the session? The judge, Justice Eve, seemed to find much that was posthumorous in the posthumous property case. He pointed out that his jurisdiction was limited to England, so he couldn’t rule on the spiritual plane. A commentator in The Virginia Law Review helpfully suggested that the spirit Cleophas be brought in to be cross-examined via automatic writing.

While perhaps intended facetiously then, it is relevant in the current age of AI that Cummins v. Bond ruled the author must be human.

In a ruling that would, bizarrely, affect the course of intellectual property law forever after, Geraldine Cummins won the copyright. Cummins v. Bond determined that an author is the one who converts the message of the supernatural into readable language. It set a precedent that the author is the individual “but for whose actions” the work would not exist, as the legal scholar Shyamkrishna Balganesh noted in 2017 in the Columbia Law Review. While perhaps intended facetiously then, it is relevant in the current age of AI that the case also ruled the author must be human.

While Geraldine Cummins was slapping away Bond’s unhelpful hand from her automatic writing pencil, women were finding agency in hacking another form of spirit authorship to get access to the publishing queue. These women added new literature to the canon under the name of a deceased male celebrity. The literary scholar Helen Sword describes how Hester Dowden published a new book dictated to her by Oscar Wilde—who had died 24 years before. The book led to a fight in the Occult Review between Arthur Conan Doyle—Lady Doyle’s co-author on Pheneas Speaks—who claimed the author was clearly Wilde, and C. W. Soal, who claimed “that the author of the text was the medium herself, even though she may not have been aware of her forgery.”

Meanwhile, Lola V. Hayes crafted and published a new Mark Twain book, Jap Herron: a novel written from the Ouija Board. It won national attention, as well as its own lawsuit from Samuel L. Clemens’ daughter. Theodora Bosanquet took up the mantle for the deceased Henry James, the writer Leigh Wilson notes in Critical Survey. When Marguerite Eymery’s first book earned her a prison sentence in absentia for her erotic gender-bending storytelling, she explained that the real author was Rachilde, a late Swedish nobleman, the literary scholar Muireann Maguire writes in The Modern Language Review. These women pirated the brand names of dead celebrities, using them to find agency, if not an author credit, and slip into publishing through a side door.

This heyday of spiritualist ghostwriting took place, not coincidentally, just as the modern ideas of authorship and copyright were being codified. Some mediums, like Hester Dowden, used that authorial ambiguity to their advantage. Others, like Lady Doyle, were caught up in pre-Cummins power dynamics. All of these women comprise a secret congregation of overlooked writers, whose names are as buried as the bodies of those they ghostwrote for.

George Yeats outlived her husband by three decades. His rejected dedication in A Vision had thanked her for working on a project that she was too bored to read. Despite her apparent boredom, after his death, George took up A Vision and edited it for immediate republication. “[Yeats] had not been long in his temporary resting place… before the process began of—not to put too fine a point on it—corrupting the texts,” says Yeats diehard Richard Finnneran. Rather than move on from the writing she had poured so many hours into since that first week in Ashdown Forest, George continued to fine tune and tweak the work collected years later in editions of Yeats’ poems.

Like Hester Dowden and Lady Doyle, George was purportedly one of the most finely tuned spirit mediums of her time. One might therefore assume she could have gotten in touch with the deceased Yeats to collaborate on these revisions. But, oddly enough, it doesn’t seem like she ever asked for his input.