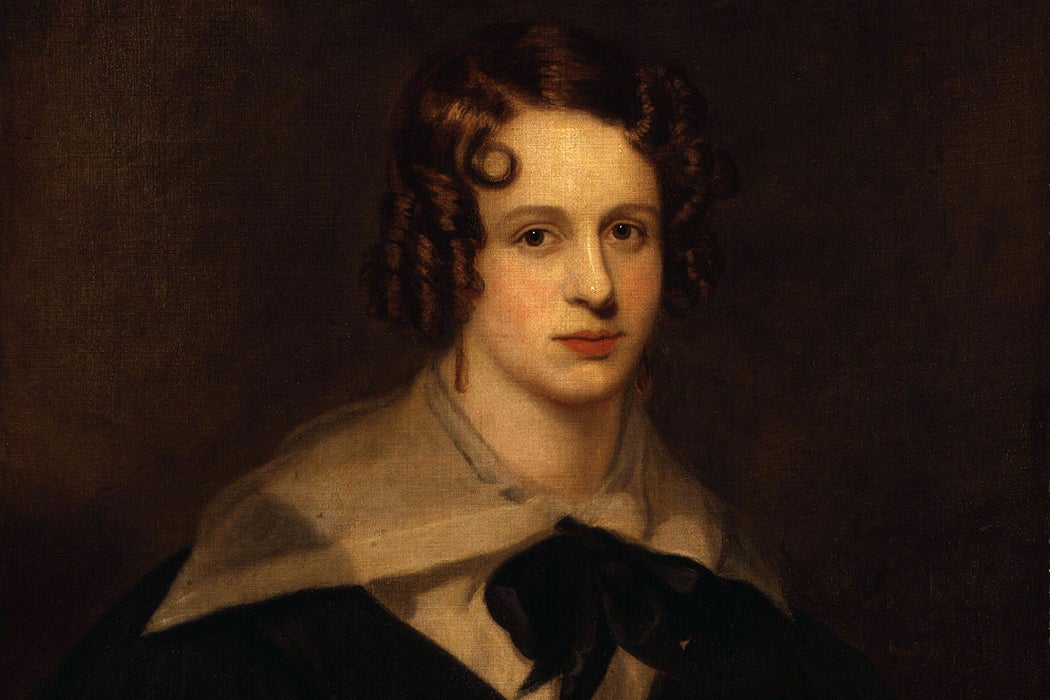 Popularity has long been a double-edged sword for women writers. It frequently serves as an excuse to excise their work from the canon of literary history at the exact moment it gains the attention and approval of the reading public. Women’s literary work is often subjected to patronizing critique and backlash once too many people have read it, particularly when those people are women, as the nineteenth-century “poetess” trend illustrates.

The Scottish editor and literary historian Alexander Dyce, in his defining 1825 anthology Specimens of British Poetesses, delivered a back-handed compliment that would come to characterize this particular poetic genre:

The magic tones which have added a new existence to the heart—the tremendous thoughts which have impressed a successive stamp on the fluctuation of ages, and which have changed the character of nations, – these have not proceeded from woman; but her sensibility, her tenderness, her grace, have not been lost or misemployed.

The work of the poetess was emotional, enjoyable, and easy to read, but it was not truly artistic or ambitious. Instead, during the heyday of the poetess tradition—in the 1820s and 30s—the label was interchangeable with gendered qualities of sentimentality, effusive emotion, and flowery images.

Despite the fact that the term was often used in a derogatory or trivializing manner, a number of women writers cultivated the identity on purpose, allowing them to make a middle-class living through literary production in previously unseen numbers. As the literary scholar Paula Feldman has shown, Felicia Hemans, the paradigmatic example of the sentimental, domestic poetess, earned more as a writer than many of her more famous contemporaries, including Jane Austen and canonical Romantic poets like Percy Bysshe Shelley and John Keats.

This tension between professional success and traditional gender roles has become a focal point in debates about the recovery of feminist literary histories. Despite their previous popularity, these women largely were erased from our collective cultural memory in the intervening two hundred years. We have, it seems, long struggled to reconcile women’s popular appeal with literary achievement and aesthetic judgment.

The poetess’s main venue was the literary annual. An invention of the 1820s periodical press, the literary annual took advantage of technological developments that made paper and engraving much cheaper. Annuals were nicely-bound magazines delivering an eclectic mix of illustration, poetry, and short prose in a variety of genres. This mixture was dictated by popular taste rather than editorial judgment. While popular male writers and artists contributed, the annual was intended for and read by a mostly female, middle-class audience.

Though elaborately decorated, annuals were reasonably priced, and greatly expanded the readership of poetry in the early nineteenth century. They were marketed as ideal gifts for family, friends, and lovers. Annuals were valued both as attractive material objects that might be displayed in the home, and as collections of delicate, feminine verse. “The Annuals,” wrote the poet Robert Southy in 1828, “are now the only books bought for presents to young ladies, in which way poems formerly had their chief vent.”

The annual was an artifact of the advent of mass media, and indicated a shift in the cultural valuation of poetry. The literary scholar Katherine D. Harris, who has written extensively on the literary annual, tells us that “in 1828, 100,000 copies of fifteen separate annuals earned an aggregate retail value of over £70,000.” The annuals also paid well, typically offering around 50 pounds for a forty-line poem. This was enough to support a family for several months, and the swift payout enabled the professionalization of female poets on an unprecedented level. By 1830, a professional woman author, writing poetry, could earn a comfortable middle class existence.

For instance, the literary scholar Paula Feldman’s detailed account of poet Felicia Hemans’ earnings, reconstructed from letters and the ledgers of her publishers, makes it clear that Hemans was able to provide a comfortable lifestyle for her household, which included her five sons and, for a time, her mother, solely through literary production. Hemans, Feldman shows, published 94 poems in 13 British literary annuals.

In the midst of her nineteenth-century fame, Hemans was considered the ultimate representative of feminine, patriotic domestic virtue. Born Felicia Browne in 1793, in Liverpool, England, she started writing and publishing poetry as a teenager. While she had moderate success, and attracted the attention of other writers (including an attempt at correspondence from Percy Bysshe Shelley, quickly and probably wisely shut down by her mother), Felicia did not immediately think of her writing as a professional pursuit.

She continued to publish as “Mrs. Hemans,” even though the real state of her marriage was no secret.

She married Captain Alfred Hemans in 1812, and the couple had five sons over the next six years. But in 1818, the couple separated. Captain Hemans moved to Rome, and the pair never met again. They communicated to an extent, mostly about their children, but he didn’t help her financially. It was at this point that Hemans knew she needed to be savvy about her poetic brand: There was more at stake than artistic ambition.

As a result, she continued to publish as “Mrs. Hemans,” even though the real state of her marriage was no secret. This apparent contradiction is characteristic of Hemans, and indicative of her sharp, flexible mind. She was well read in multiple languages, and had a keen eye for historical subjects that were popular with readers. However, critical perceptions that her work was guided mostly by commercial motivations clouded it reception. By the twentieth century she had been excised from the literary canon, mentioned only to be obliquely dismissed as “Mrs. Hemans.”

In the 1980s, when feminist literary scholars began to “recover” lost female writers, they had qualms about whether or not highlighting Hemans was worthwhile. For one thing, early feminist recovery projects were enthusiastic about women writers of former ages who could be cast as proto-feminists, like Mary Wollstonecraft, author of A Vindication of the Rights of Woman. Hemans, writing firmly within and in many ways personifying the poetess tradition, didn’t necessarily fit the mold.

Feldman calls attention to Hemans’s 1828 collection of poetry, Records of Woman. Most of the poems in that volume deal with problems facing women who achieve historical or literary fame. Hemans is attentive throughout to the contradictory pressures often placed on women, to the ways in which they have asserted themselves in a historical narrative written by men.

“An Image in Lava” is striking, inspired, as Hemans tells us in a footnote, by the discovery of the impression of a woman clutching a baby during the uncovering of Herculaneum and Pompeii:

THOU thing of years departed!
What ages have gone by,
Since here the mournful seal was set
By love and agony!

Temple and tower have moulder’d,
Empires from earth have pass’d,–
And woman’s heart hath left a trace
Those glories to outlast!

These first two stanzas establish a contrast between the mortal works of men, towers and empires and the like, and the immortal trace of a mother’s love for her child. Later in the poem, the speaker claims that she would forego all earthly treasures for this one “rude monument, / cast in affection’s mold.” Hemans sets human love and motherly devotion above any masculine virtue, subtly undercutting the achievements of men.

But, as Feldman tells us, “though Records of Woman is a strong feminist work, its ironies and subversion were subtle, for Hemans literally could not afford to alienate any major segment of her buying public.”

Some twentieth-century critics have expressed concern about the quality of work produced by the poetess tradition, which often employed old-fashioned formal techniques that echoed those of the laboring classes, like the ballad. These poems were, in other words, accessible. Moreover, the themes were typically sentimental, meant to provoke the “softer” emotions: a mode of response often associated with a lack of reason and intellectualism. As Dyce’s backhanded compliment suggests, we have been culturally inculcated to believe that sentiment is all well and good, but it isn’t ambitious, and it isn’t the type of work produced by true (male) geniuses.

See, for example, an article by John Constable in the Cambridge Quarterly from 2000 rather baldly titled “Romantic Women’s Poetry: Is it Any Good?”

The poetess tradition complicates traditional literary-historical narratives about aesthetic development and the formation of low- versus high-brow taste in the nineteenth century. But Constable’s title is reminiscent of many twenty-first century think-pieces about the valuation of popular female authors and their work. Recall the title of Evgenia Peretz’s infamous piece for Vanity Fair from 2014, detailing the critical backlash against Donna Tartt’s The Goldfinch, mere months after it won the Pulitzer Prize: “It’s Tartt—But is it Art?”

Although studies reliably find that women read more than men, when a book is written for and consumed by women, or made popular by women, it is seen again as evidence of some fault in the book. Its literary merit is questioned or revealed to have been completely absent all along. Contemporary author Jennifer Weiner, in an acid response to what she labels “Goldfinching,” echoes the same language used by nineteenth-century critics to trivialize the Poetess. “When a book written by a woman summits a certain height of popularity,” she writes, “some highbrow critic will announce that they are not literature at all but, in fact, sentimental trash.”

The literary critics Virginia Jackson and Yopie Prins call the poetess’s central role in shaping the nineteenth-century literary canon her “disappearing act:” elevated to center stage, at the height of expectation and in full view of the audience, she is erased from view.

Following Hemans’s death in 1835, fellow poetess Letitia Elizabeth Landon published an elegy in the New Monthly Magazine titled “Stanzas on the Death of Mrs. Hemans.” Landon’s rhythmic lament highlights the contradiction between the public and the private image of a female poet:

Ah, dearly purchased is the gift,
The gift of song like thine;
A fated doom is hers who stands
The priestess of the shrine.
The crowd—they only see the crown,
They only hear the hymn—
They mark not that the cheek is pale,
And that the eye is dim.

Landon and Hemans never met. But Landon’s emphasis on Hemans’s unnoticed sadness rehearses a familiar female narrative of disguise and performance. Landon gestures across a gap in history, reminding us that the popularity of the poetess also allowed them to speak to one another.

The Poet and the Profits: Felicia Hemans and the Literary Marketplace
By: Paula R. Feldman
Keats-Shelley Journal, Vol. 46 (1997), pp. 148-176
Keats-Shelley Association of America, Inc.
Feminizing the Textual Body: Female Readers Consuming the Literary Annual
By: Katherine D. Harris
The Papers of the Bibliographical Society of America, Vol. 99, No. 4 (DECEMBER 2005), pp. 573-622
The University of Chicago Press on behalf of the Bibliographical Society of America
Romantic Women's Poetry: Is It Any Good?
By: John Constable
The Cambridge Quarterly, Vol. 29, No. 2 (2000), pp. 133-143
Oxford University Press
Lyrical Studies
By: Virginia Jackson and Yopie Prins
Victorian Literature and Culture, Vol. 27, No. 2 (1999), pp. 521-530
Cambridge University Press 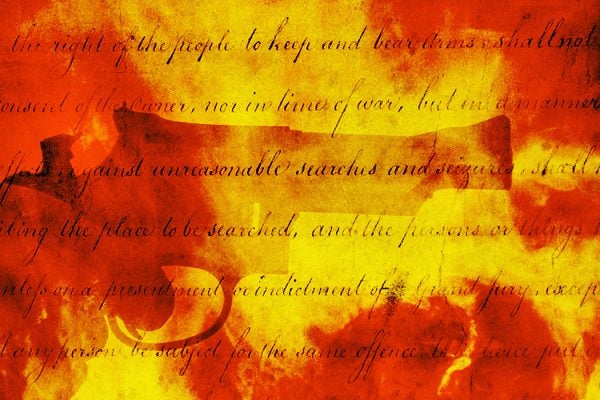 Revisiting the Messy Language of the Second Amendment

The debate over the Second Amendment is not just about guns—it's also about grammar.