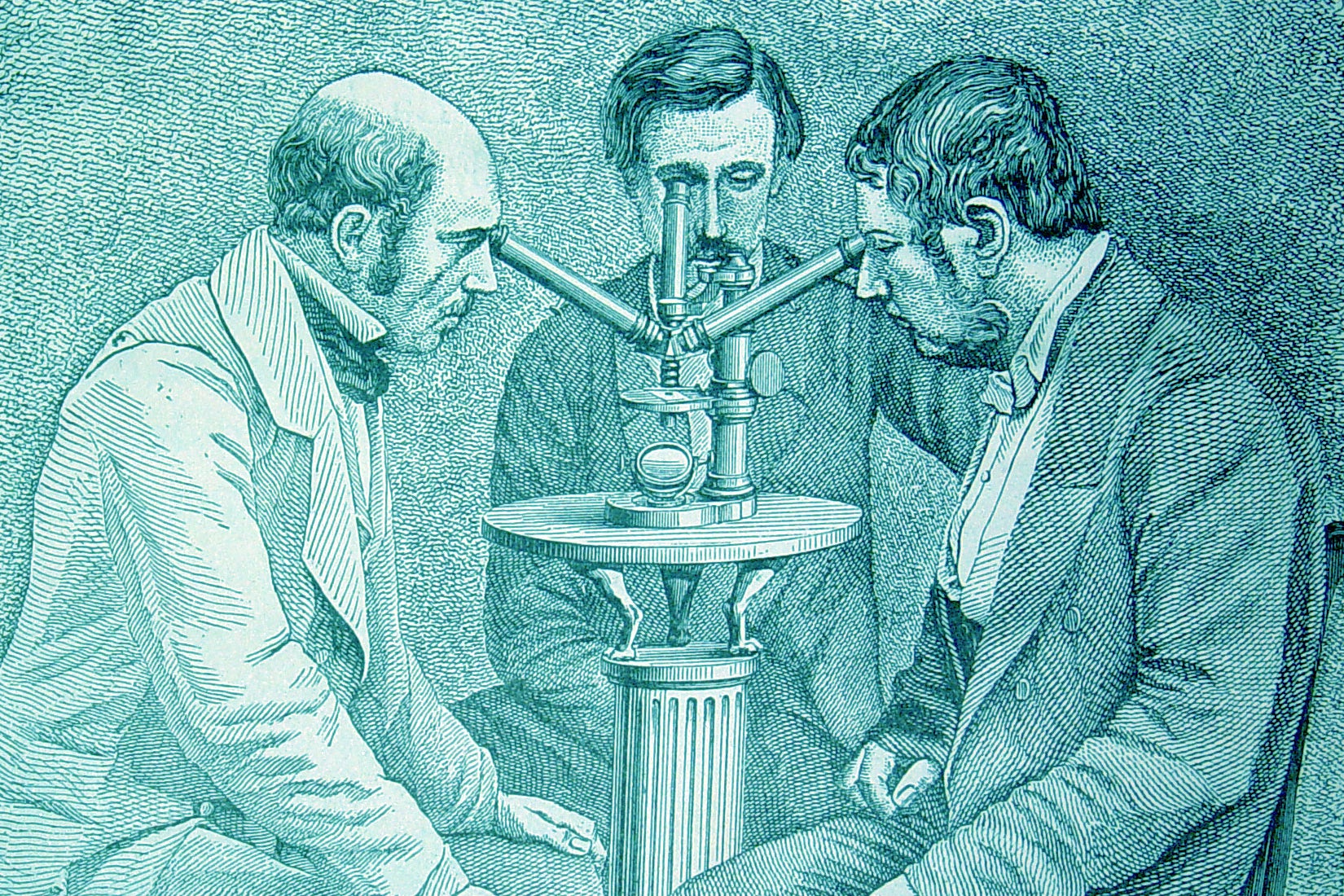 Interest in natural history may have reached its peak in Victorian-era Great Britain, and a major driver of the craze was microscopes. As they became more powerful and more affordable, microscopy became an increasingly popular hobby. Gazing through these “magic glasses” rendered previously unseen worlds, which teemed with tiny living creatures, newly visible. When it came time to describe what they were seeing, people frequently turned to the language of the fantastical.

“Naturalists and lay users readily used a vocabulary drawn from fairy literature to… convey the incomprehensible strangeness and minutiae of the microscopic world,”  writes the historian Laura Forsberg in “Nature’s Invisibilia: The Victorian Microscope and the Miniature Fairy” (Victorian Studies 2015). “Though the link may seem incongruous, a surprisingly substantial body of Victorian scientific literature and fairy stories connect microscopes to fairies.”

“The slime from a rock-pool teems with fairy forms darting about.”

In an 1846 lecture, the naturalist Charles Kingsley explained, “in the tiniest piece of mould on a decayed fruit, the tiniest animalcule from the stagnant pool, will imagination find inexhaustible wonders, and fancy a fairy-land.” In 1861, before becoming president of the Royal Microscopical Society, Henry Slack described a group of protozoa as “a tree from fairy-land, in which every leaf has a sentient life.” In her lecture “Magic Glasses and How to Use Them,”  later published in an 1890 collection, the spiritualist popularizer of science Arabella Buckley declared: “the slime from a rock-pool teems with fairy forms darting about.” Under microscopes, Victorians couldn’t help but perceive a real-life fairyland.

“Like the microscope, the fairy offered Victorians a means of imaginatively reconceptualizing the natural world as a place of minute wonders; the microscope revealed real, living particles in the crevices of nature, while fairy texts imagined mushrooms and flower buds populated with miniature fairies,” Forsberg explains.

Microscopy simultaneously demystified the natural world and rendered previously undetected creatures visible. For a Victorian, being able to see what was once hidden implied that there was yet more about the natural world to be uncovered and discovered. When the world of fancy risked being entirely debunked by newly discovered rational-scientific explanations, people began ascribing fairy-like characteristics to microscopic creatures as a way to re-inject a sense of divine mystery into nature. In this way, fairies often acted as a replacement for God in popular science books: the wonders of fairyland substituted for the majesty of creation.

“Writers of imaginative literature frequently used scientific discoveries to give credence to their fanciful inventions,” Forsberg writes, noting that in particular, “fairy authors and illustrators drew upon microscopic discoveries to lend a sense of reality to their unbelievable imaginings.”

In Fairy Tales, Natural History and Victorian Culture, author Laurence Talairach-Vielmas makes a similar observation: “If science appeared to disenchant the world, scientists increasingly explaining away the mysteries of natural phenomena, Victorian popularizers [of science] played a key part in presenting the natural world as enchanting and entrancing: although the wonders of science could account for the mysteries of nature, nature nonetheless remained a fairyland.”

Since natural history and other science subjects weren’t widely studied in school during this time, books on these topics “belonged to the world of the nursery, a realm of women instructors,” Talairach-Vielmas points out. Many texts from the time that marry natural science and fairies are geared toward women and children, such as John Cargill Brough’s The Fairy Tales of Science: A Book for Youth (1859), Charles Kingsley’s The Water Babies (1863), or Arabella Buckley’s The Fairy-Land of Science (1878), among others.

The orientation toward children added to the popularization of the concept that fairies are miniscule. The idea that fairies are anything but tiny may seem odd to us now, but at the time, they tended to be thought of as being about the size of a small child. Shakespeare hinted at the idea of tiny fairies in his plays, but the idea didn’t really take hold in Great Britain until around the nineteenth century. Talairach-Vielmas asserts that both Kingsley’s and Buckley’s fairy-laden science tales in particular were “attempts to play with scale in order to adapt to the diminutive world of the child.”

But the effect was not confined to the nursery. Multiple scientific advances of the time— such as those that helped make microscopy and telescopy available to the general public—conspired to upend the Victorians’ sense of scale in general. Some writers of the era began to lament the loss of belief in fairies caused by the rise of rational thought. But Forsberg observes that “the same scientific discoveries that eliminated belief in the child-sized fairies of superstition also opened up the possibility of fairies on a miniature scale.” Not to mention that the concept of miniature worlds “captivated both readers of microscopic literature and audiences of fairy texts.” So, by “tethering fairy imaginings to recent microscopic discoveries,” these magical creatures enjoyed a cultural renaissance.

Given the intended audience of these texts, it makes sense that illustrations were a key feature. The fairy books thus had an impact not just on literature and the sciences, but also on the visual arts. Painters and other creative artists of the era viewed this newly uncovered microscopic fairyland as an opportunity that practically demanded imaginary reconstruction.

“The microscope revealed myriads of shapes and creatures so utterly unfamiliar that writers on the subject resorted to flamboyant prose in order to render them intelligible. This had reverberations not least for the visual arts,” the art historian Ursula Seibold-Bultmann explains in “Monster Soup: The Microscope and Victorian Fantasy” (Interdisciplinary Science Reviews 2000). “The metaphors chosen by authors attempting to describe the microscopic world soon developed a visual presence, with supernatural features being projected even onto illustrations in supposedly scientific contexts.”

Seibold-Bultmann believes it’s no coincidence that the golden age of British fairy painting overlaps chronologically with the Victorian microscopy craze. But she also can’t help but wonder whether looking to the real world for inspiration was liberating or perhaps limiting to the creative arts.

For the sciences, at least, the injection of fairies and other fantastical elements appears to have been a good thing. Fairies were used to champion the value of imagination, curiosity, and an open mind as essential components in scientific inquiry. They also helped show the power of fantasy and entertainment in engaging young learners in otherwise dry subjects.

But it wasn’t all fun and fancy. As often as fairies were trotted out to underscore the wonders of the natural world, they were deployed to express doubt in scientific findings. And the microscope itself was used to argue both for and against the existence of fairies. The microscope, thus, embodied a dichotomy, fulfilling two seemingly disparate purposes: an instrument of serious scientific study and a gateway into the realm of miniature living beings.

Forsberg cites the 1858 short story The Diamond Lens to illustrate how the fairy represented humanity’s complicated relationship to nature. The story tells the tale of a scientist who discovers a graceful, delicate female creature in a droplet of water under the lens of his super-powered microscope. He falls in love with this “sylph,” and spends all of his time gazing at her, rejecting regular-size human women. Eventually, the scientist sees that the creature is dying because he has let the water on the slide dry up. His selfishness has led to her demise.

Fairies perhaps represented an attempt to assuage the tensions between science and spirituality, a balm for the myriad crises of faith that had arisen as a result of evolutionary theory. Since neither could be seen, some amount of faith was required for belief in both a Creator and in the new scientific theory of evolution. Besides, evolutionary science seemed to suggest that magical transformations of all kinds were indeed possible, so perhaps people were capable of both spiritual and physical transformation.

“Rather than opposing one another, scientific discoveries and fairy fictions reinforced each other’s imaginative appeal,” Forsberg notes. “By combining scientific observation with fanciful imagination, both the fairy and the microscope produced a sense of wonder.”

The Victorian predilection for portraying microscopic creatures as fairy-like left an indelible imprint on the natural sciences. Forsberg suggests that, in this way, the microscope permanently transformed people’s imaginative relationship to nature: “[H]aving once gazed through the microscope’s lens at a sample of pond scum and seen the dozens of miniscule creatures living there, the user might imagine in any body of water the billions of microscopic creatures concealed from view.” 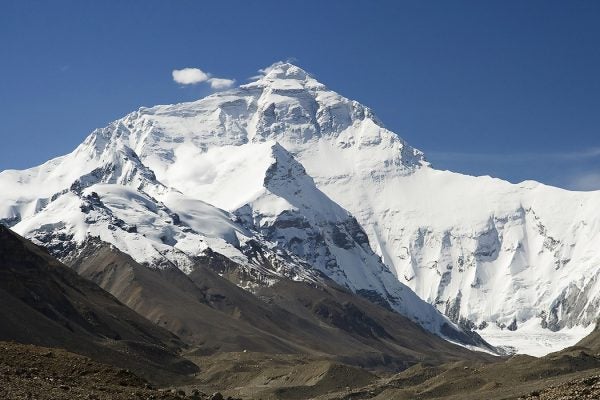 It’s not easy to measure a mountain. Mount Everest's height has been known since the middle of the nineteenth century, but how did they figure it out with no altimeters or GPS?