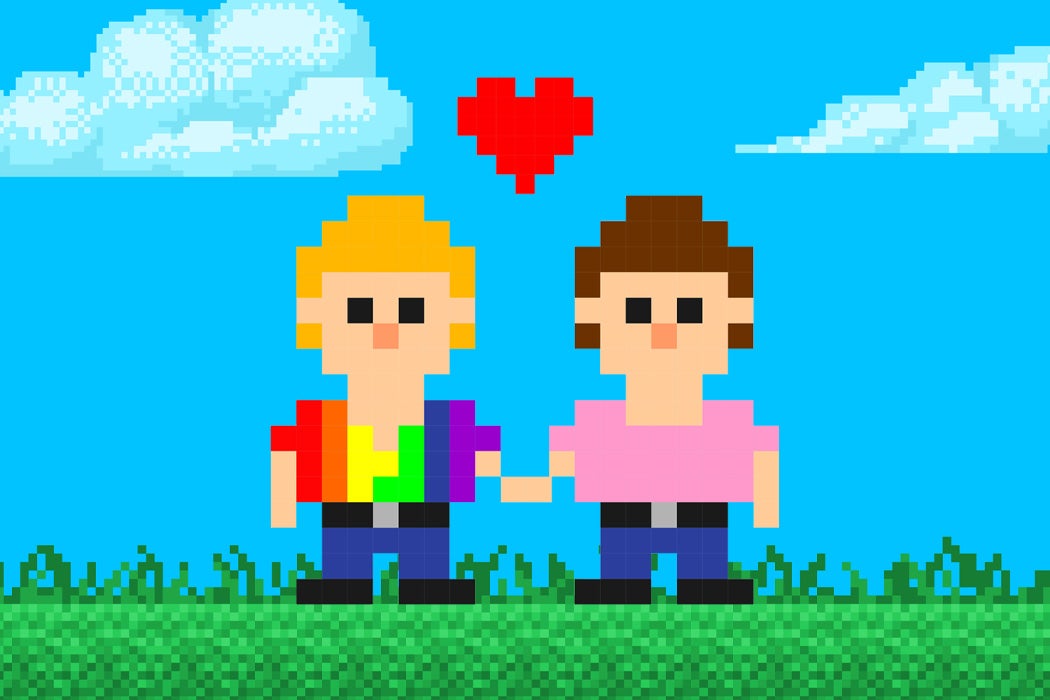 For decades, LGBTQ+ people have found solace and community in the virtual world of video games. Where being a member of a marginalized group in the real world sometimes invited bigotry and discrimination, digital spaces offered an avenue of escape and safety. After all, aren’t video games for fun?

Game scholars mostly agree that games should exist for pleasure. But this purpose often leads gamers, designers, and scholars alike to shut down conversations about diversity. Despite the popular branding and marketing of video games targeted at straight cisgender males, recent statistics on gaming show that 41% of gamers are women. And 10% of all gamers over the age of 18 identify as LGBTQ+. One recent study (from 2019) on the performance of gender and sexuality performance in video games notes:

A consensus seems to be that, especially within mainstream gaming, a masculine culture systemically minimizes or oppresses female and non-heteronormative perspectives, for instance through hypersexualization of female characters or harassment of women on online discussion boards… [and] non-heteronormative perspectives [being] systemically subjected to processes of othering and exoticizing.

Even if LGBTQ+ gamers could avoid discussing their real-world identities online, they found themselves implicitly and explicitly depicted in video games, for better and for worse. Since the 1980’s, developers have incorporated LGBTQ+ characters into their video games. In Le Crime du Parking, an interactive fiction game by a French developer from 1985, Paco, the culprit in the murder mystery, is a gay man and a drug dealer. Four years later, C. M. Ralph’s game Caper in the Castro, which was released to raise money for the AIDS epidemic, starred lesbian detective Tracker McDyke as she searched for her drag-queen friend, Tessy LaFemme.

In the next decade, role-playing games incorporated the ability for players to have same-sex relationships. The original Game Boy game Great Greed, released in 1992, was the first video game to offer the possibility of its male protagonist marrying another male character. Six years later, Fallout 2 became the second game to allow players to marry a character of the same sex.

Direct attention to LGBTQ+ players from gaming companies, on the other hand, wouldn’t reach a mainstream audience until 2006, when World of Warcraft player Sara Andrews had a well-publicized fight with the game’s developer over her LGBTQ+-friendly player’s guild, an online group where WoW players can chat. After advertising the guild in a public chat space, Andrews’ was warned she could be ejected from the game on the grounds of breaking Blizzard’s harassment policy. At the time, a Blizzard administrator told her that a guild publicizing a safe space for LGBTQ+ people and their allies had the potential to draw homophobic players, and those players’ speech, in turn, would make a hostile game environment.

The digital world has always been a space where opportunities to discuss sexuality and gender can exist, just as much as in any LGBTQ+ space in the real world.

Andrews tapped the help of Lambda Legal, an LGBTQ+ legal advocacy group, to join her cause—and succeeded. The international uproar also prompted Blizzard and Thor Biafore, then senior manager of Blizzard’s customer service, to apologize to Andrews. As a result of the case, the nearly 1,000 in-game administrators Blizzard employed to moderate their games received training to help them deal with diversity issues. While outlets like the BBC covered the incident—and the subsequent apology—some journalists and Blizzard employees alike said they were surprised to hear that LGBTQ+ people like Andrews believed their sexuality mattered in online spaces.

As the gaming scholar Adrienne Shaw wrote in 2015:

Articles discussed the presence of homophobic language… in online game spaces as a problem. Yet what was “news” was that people did not want to escape their marginal identity online. That is, reporters asked that if it is so hard being queer online, why would anyone want to declare their queerness online?

Even if journalists didn’t realize it, LGBTQ+ people were performing and talking about their queer identities through gaming platforms since the early days of the internet, participating in discussions on mailing lists, usenet groups, or IRC channels. The digital world has always been a space where opportunities to discuss sexuality and gender can exist, just as much as in any LGBTQ+ space in the real world.

The same year that Sara Andrews took legal action against Blizzard, developer Rockstar Games, the publisher of Grand Theft Auto, made headlines when players discovered that Jimmy Hopkins, a character in Bully, was able to have relationships with both male and female characters. Originally, however, mainstream gaming news sites didn’t acknowledge the character’s sexuality—instead, gay gaming sites reported the character’s sexuality as an “Easter egg,” a hidden but fun surprise within a game. Sara Andrew’s case—and the news coverage of Bully—exemplify how digital spaces allow LGBTQ+ people to form communities and discover themselves within them.

More recently, games like Dream Daddy, a choose-your-own-adventure gay romance dating simulator that was released in 2017, took over gaming and fandom communities across the internet and started debates amongst queer fans over representation. Some commentators lauded the game for its representations of queer men, while others believed the game was unrealistic and fetishizing. Similarly, mainstream games like Fortnite, Super Smash Bros., and Assassin’s Creed Odyssey are regularly discussed on Reddit communities like r/Gaymers and r/TransGamers. Within these communities, LGBTQ+ people look for others to play video games with, share fan art, and express their experiences being queer and transgender online.

According to ethnographies that Shaw conducted, queer and transgender gamers—who sometimes self-identify as “gaymers”—help explain why LGBTQ+ don’t neglect their in-person identities online. “Informants told me that one of the big reasons they formed their online community was to escape the homophobia that Andrews experienced,” Shaw reflected. “They also indicated that although gay content alone was not centrally important to them, they appreciated it when games at least offered same-sex coupling, if romance was part of the game play.”

Harassment in online gaming is frequent and serious, even for non-marginalized people.

While some of the people Shaw interviewed indicated their desire for more inclusion by game designers, most were wary about whether developers could create LGBTQ+ content and marketing that wasn’t offensive. Women gamers worried about how advertising to the “girl gamer” would emphasize adolescent—and heteronormative—forms of femininity. By and large, most LGBTQ+ gamers wanted the option for characters to have queer relationships, as the results were seen as “less offensive” and more “authentic” than straight and cisgender game developers creating what they believe a gay or transgender character should be like. (After all, what exactly does it mean to have a “gay identity” when the LGBTQ+ community comes from all different walks of life?) And for gaymers, the ability to form online communities, and to do so on their own terms, lets them be true to themselves.

But there’s a problem. One recent survey on harassment in gaming, conducted by the ADL in collaboration with Newzoo, further illustrates the point gaymers make when talking about why their online communities are important to them: harassment in online gaming is frequent and serious, even for non-marginalized people. A staggering 74% of US adults who play online multiplayer games experience some form of harassment, and 65% report experiencing some form of “severe” harassment, such as physical threats, stalking, and sustained harassment. The unfortunate consequence has been that 23% of online multiplayer gamers who have been harassed avoid certain games due to the player base’s reputation for harassment.

More than half of online multiplayer gamers who experience harassment believe they were targeted because of their identity. Women (38%) and LGBTQ+ (35%) players reported the most online harassment. In addition, Black or African American (31%), Hispanic and Latinx (24%), and Asian-American (23%) players weren’t far behind in these negative experiences. And Jewish and Muslim (19%) players reported being targeted because of their religion.

Talking about diversity in gaming is not always fun—like gaming itself, it can cause people to feel a range of emotions (joy, sadness, annoyance, and rage)—and can be antithetical to gaming’s primary purpose of pleasure. As Bonnie Ruberg, author of Video Games Have Always Been Queer, noted in their article “No Fun:”

Fun as a monolithic principle silences the voices of marginalized gamers and promotes reactionary, territorial behavior from within privileged spaces of the games community. Moving beyond fun, by contrast, opens up whole genres of possibilities, many of them queer. The spirit of no-fun is the spirit of alternatives, of disruptions, of difference.

In the reactionary corners of gamer culture, according to Ruberg, discussions about diversity in gaming take away from the pleasure experienced by gamers who don’t come from marginalized backgrounds. To illustrate their point, Ruberg points to Gamergate, “the extensive online harassment campaign[…] waged against female game designers and feminist games journalists.”

At the start of Gamergate, many gamers posted anonymously on social media and forums that video games should not bring the real world into virtual spaces, that socially and political engaged critiques of video games ruins their escape from the real world. The result was real people facing real harassment, death threats, and even sexual assault because they believed gamers needed to talk about diversity.

Within the game design community, avoiding these “no fun” aspects of games limit their possibilities to create queer worlds and characters. As Ruberg writes: “Designers will need to allow for a wider range of emotional experiences if they hope to achieve legitimacy in a culture that currently views games as juvenile, fun as escapist, and real art as emotionally challenging.” By not tackling these issues of diversity, designers are restricting their work’s ability to be perceived by the public as a meaningful artform. Calls for diversity from gaymers, while “tough” and “hard” for some to hear, are meant to elevate virtual worlds that all gamers can love and enjoy.

Game developers can ill afford to ignore the gayming community. Caring about their concerns means making ongoing efforts to reduce harassment. Ignoring them, the communities they create, and the rich array of emotions they feel, would prohibit games themselves from reaching their full expressive, creative, and artistic potential, taking on new meanings in ways only a queer sensibility could inform.

Share Tweet Email Print
Have a correction or comment about this article?
Please contact us.
LGBTQvideo gamesCanadian Journal of Education / Revue canadienne de l'éducationDiGeSt. Journal of Diversity and Gender StudiesQED: A Journal in GLBTQ Worldmaking 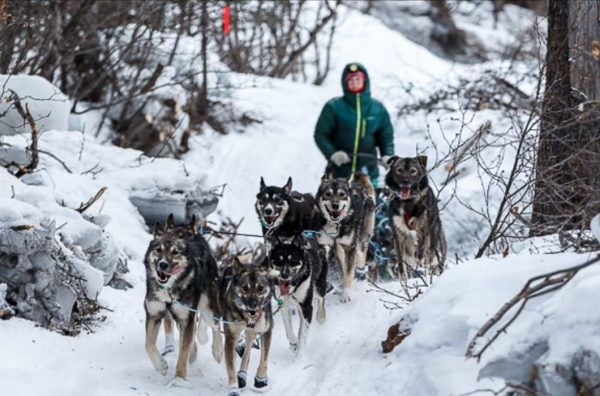