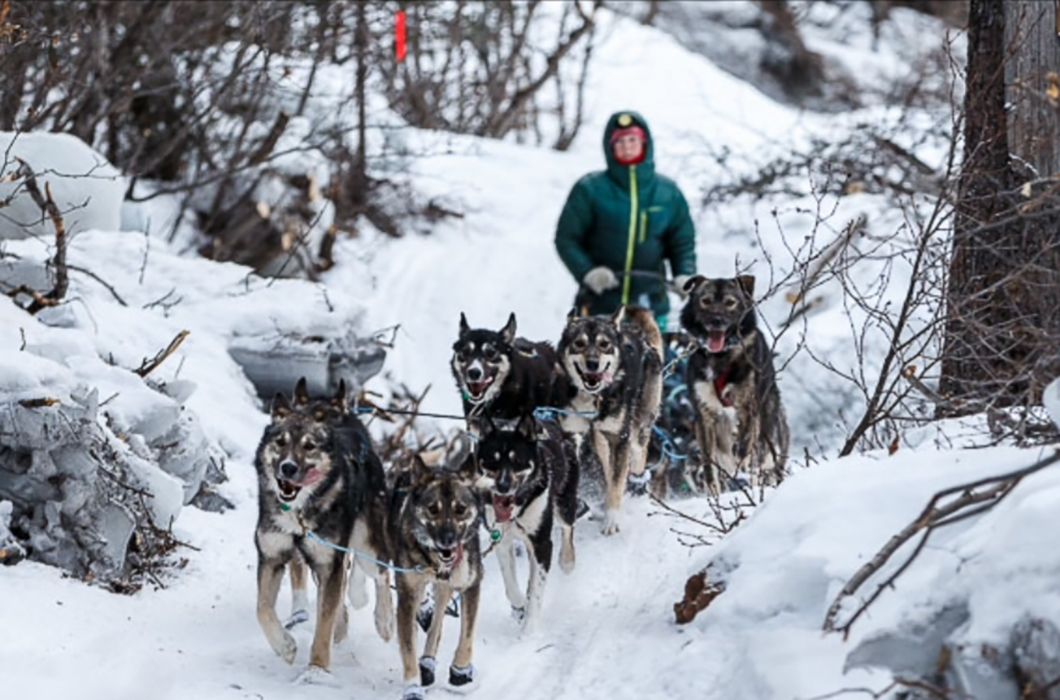 The fabled Spirit of the North has compelled countless souls to abandon their comforts of civilized life in pursuit of a dream romanticized by the poems of Robert Service and the novels of Jack London. Some, who grow weary with the work of it or simply unable to afford it, turn and retreat back Outside (to the lower 48). Others, like Joe Redington, Sr., find in the slow and quiet rhythms of the North a melody harmonious with their own. They find country vast enough to let their boldest ideas breathe and grow. No other place could have fostered the creation of the Iditarod Trail Sled Dog Race, and it’s safe to say no other place could have sustained it for more than forty-four years.

Much has changed about the race, but on trail, dog teams and their drivers move along exactly as they have for centuries. Redington’s goal in establishing the race was to defend one of the great northern traditions against the tireless march of modernity. He moved to Alaska after the second World War, homesteading in Knik, north of Anchorage. His accomplishments with dog teams are various and superlative, including: summiting North America’s highest peak, the 20,310 foot Denali, with dogs; recovering plane wreckage from remote sites for the Army; and winning a staggering number of races along the way. The Redingtons kept nearly 200 dogs, some of them for racing, others for freight-hauling. The scope of responsibility such a number entails demands a deep love for and understanding of canines. That love for dogs lit a fire in Joe Redington, Sr.

Redington saw a tradition that he deeply loved and respected disappearing.

In the 1960s, the remote villages of Alaska experienced a sudden and sweeping change. It used to be that behind every house was a dog yard with a team of Alaskan huskies trained up and ready for adventure. For centuries, dog teams provided Alaskans with every conceivable means of survival: subsistence, travel, trail breaking, freight hauling, postal runs, deliveries of medicine—the list goes on and on. In fact, the last postal run by a dog team took place in 1963.

The advent of the snow machine suddenly provided interior Alaskans with a means of achieving all of those functions with considerably less daily effort. A dog team requires at least twice daily feedings, a clean dog yard, water in the summer, the acquisition of fish for food, constant veterinary care, love, and an enduring bond with a musher. A snow machine requires gas.

Redington saw a tradition that he deeply loved and respected disappearing from the very culture that wrought that reverence in the first place. He knew that, without action, the sport of dog mushing could become a distant cultural memory; without the continued experience of distance mushing, those stories so central and unique to Alaskan history could not endure.

Redington’s familiarity with the rich history of dog mushing in Alaska and with his contemporaries in the dog-mushing community put him in a unique position to do something to counterbalance the threat to traditional mushing that he was seeing everywhere. He and fellow mushing enthusiast Dorothy Page were part of the Aurora Dog Mushers Association, which put on an Alaska Centennial race in 1967, employing a portion of the Iditarod Trail.

Joe and his wife Vi campaigned for years to establish the Iditarod Trail on the National Register of Historic Places. As both a musher and a bush pilot, he familiarized himself with every bend of the trail. He recognized that along its sinewy course—winding serpentine through the wilderness of the Alaska Range and the Farewell flats, northward to the coastal trail to Nome—there existed a tremendous opportunity to shed light on the romantic spirit of the sled dog and to preserve an integral part of Alaska’s history.

The initial rules for the Iditarod were scrawled on a bar napkin.

The inaugural Iditarod Trail Sled Dog Race required a Herculean amount of work, much of it performed on blind faith. Redington established contacts with local businesses, fundraised, and applied for loans to raise the prize money. He recognized that if they were to draw mushers from around the world, they needed to entice the crowd with a hefty purse.

The initial rules for the Iditarod were scrawled on a bar napkin, based on Nome’s All Alaska Sweepstakes race, a worldwide phenomenon in the early part of the century that made household names out of revered Alaskan dog men like Leonhard Seppala and Scotty Allan. Redington contacted the Nome Kennel Club, assuring assistance from both ends of the trail. The Army Corps of Engineers pitched in, conveniently conducting an arctic winter exercise right along the Iditarod Trail, commencing curiously just days ahead of the race’s official start. The governor of Alaska established dog mushing as the state sport in advance of the race. Somehow, piece by piece, Redington’s dream of a 1,000 mile sled dog race was becoming a reality.

The only problem was that no one had ever completed a thousand-mile race. Expectations and reactions varied wildly, from enthusiastic support to acerbic naysaying. None of the mushers knew quite what to anticipate. Nonetheless, thirty-four teams showed up for the race, unloading dog trucks and sorting through mountains of gear in Anchorage parking lots, ahead of the starting gun. Race sleds as we know them didn’t exist; there were either sprint sleds (made to be light and fast) or freight sleds (longer toboggan-style sleds made to haul hundreds of pounds), but nothing tailor-made to a race that had never been run. Today’s modifications—Kevlar wrapping, tail draggers, aluminum frames, custom sled bags, and runner plastics—were nowhere to be seen. Instead, babiche-woven birch sleds were jam-packed with enough gear to sustain a musher and his dogs for the foreseeable future, weighing more than four hundred pounds. Axes, Blazo cans, sleeping bags, cookers, scoops, snowshoes, extra parkas, could anticipate needing were stuffed into the heavy sleds.

When the mushers first started down the trail, the full sum of the prize money had not yet been secured. Redington did not race in the first Iditarod, but opted to spearhead the logistics for a smooth race. In the first year, temperatures plummeted as low as -130°F with wind chill. The mushers camped together at night, trading stories over bonfires and tin cups of coffee. Teams took turns breaking trail after fresh snow fell.

Mushers had come from all over the state of Alaska—from Teller, Nome, Red Dog, Nenana, Seward, and all points in between. It was a unifying experience for the sport that provided insight into the motivations shared by the mushing community. Twenty days, forty minutes, and forty-one seconds after the race began, Dick Wilmarth and the famous lead dog Hotfoot mushed down Front Street in Nome to much adulation, garnering a purse of $12,000 for winning the first Iditarod.

Today’s victors arrive in Nome considerably faster; until this year’s race, which broke the record, the fastest time was eight days, eleven hours, twenty minutes, and sixteen seconds, held by four-time champion Dallas Seavey (whose grandfather and father preceded him in running the race). The first woman to win—Libby Riddles—did so in 1984, prompting the immediate proliferation of t-shirts stating “Alaska: where men are men and women win the Iditarod.” The race has seen one five-time champion (Rick Swenson) and a handful of four-time champs (Jeff King, Dallas Seavey, Martin Buser, Doug Swingley, and Susan Butcher). The trail is now established, kept open, and groomed by an army of volunteers. Sponsorships and financial support pour in for the race: the present champion is awarded $75,000 and a new Dodge truck.

What started as a dream of bringing the spirit of the sled dog back to the villages, shining an international light on the deep and abiding bond between a musher and his or her dog team, has ballooned into a world-renowned event. Along with the Yukon Quest 1,000 Mile International Sled Dog Race, run each February, the Iditarod is regarded as the premier event in dog mushing. Since 1990, more than 70 entrants have competed in the race every year. Meanwhile, hundreds of volunteers assist with logistics, communications, veterinary care, officiating, public relations, dog yard maintenance, and countless other tasks to make the race run smoothly.

Yet even as the race finds more renown, better PR, larger sponsorships, and a broadening audience, one thing has not changed: Out there, in the middle of the Alaskan wilderness, men and women still challenge themselves and their dogs to one of the ultimate tests of the North, navigating a forbidding expanse of land stretching 1,000 miles during the dead of winter. In the end, most teams don’t run for a shot at winning; they run for the rich, ineffable beauty of being on trail with their dogs and fellow mushers.

Goin' to the Dogs: Mushers take to the trails in the ultimate team sport
By: NANCY D. HOLT
ABA Journal, Vol. 83, No. 2 (FEBRUARY 1997), pp. 88-89
American Bar Association
Bringing Us the Way to Know: The Novels of Gary Paulsen
By: Susan Nelson Wood
The English Journal, Vol. 90, No. 3, The Lure of Young Adult Literature (Jan., 2001), pp. 67-72
National Council of Teachers of English
Sled Dog Racing: The Celebration of Co-operation in a Competitive Sport
By: Sharon F. Kemp
Ethnology, Vol. 38, No. 1 (Winter, 1999), pp. 81-95
University of Pittsburgh- Of the Commonwealth System of Higher Education 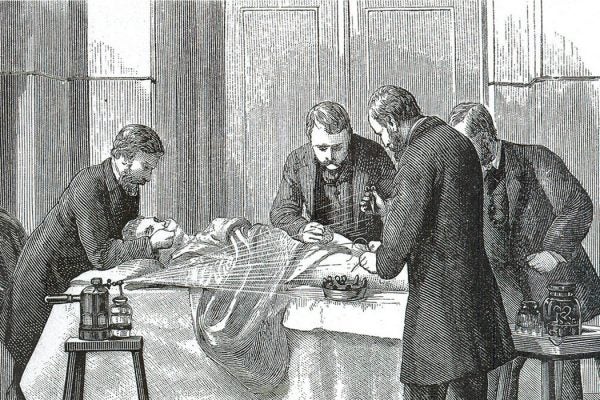 Joseph Lister's landmark articles on antiseptic surgery in the Lancet were published 150 years ago. The revolution was not immediate.