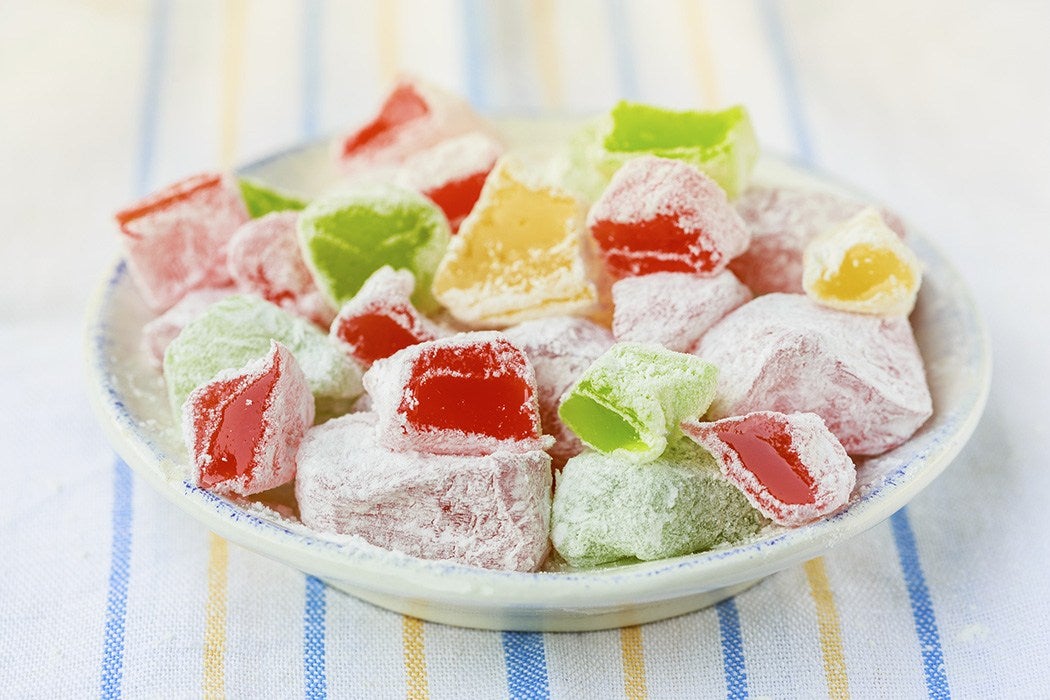 In C.S. Lewis’s classic novel The Lion, the Witch, and the Wardrobe, Edmund Pevensie enters a wardrobe and finds himself magically transported to a snowy kingdom. An unknown queen, who turns out to be a witch, asks him what he would most like to eat. The answer that jumps to his mind is Turkish delight. Within moments, he is eating a box of it.

Turkish delight is the British name for a sweet called lokum, one of many spellings and a corrupted version of the original phrase, rahatü’l-hulkum, which means “giving rest to the throat.” Mary Işın, a food historian and author of Sherbet & Spice: The Complete Story of Turkish Sweets and Desserts, which includes a full chapter on the history of lokum, dates the origins of the sweet to the 18th century. Lokum was probably invented by palace confectioners, though the original exporter, Hacı Bekir, claims to have masterminded it.

Turkish delight has never been successfully manufactured in Europe.

Lokum has only a few basic ingredients, but it is far from simple to make. An 1894 journal describes the process in great detail, warning that the starch must be stirred by two people, taking turns, in exactly the same way, to prevent any differences in consistency or dreaded sugar crystallization.

When the paste is well formed, it is poured out into little wooden moulds, these moulds being first of all sprinkled with finely powdered sugar, to prevent the sweetmeat adhering to them. The contents of the moulds are then poured out on to marble slabs, and, by the aid of a peculiarly shaped knife, the locoum is cut into strips about three centimetres wide, and these strips are again cut into small cubical pieces.

The intensity of this process, and the skill required, may be why lokum has never been successfully manufactured in Europe. Although many people tried, and put forth reasons why their attempts weren’t successful (one secretary of state for foreign affairs blamed the water, among other things), the sweet seemed impossible to replicate. Nothing was quite the same as the fresh stuff early-19th-century tourists purchased on popular visits to Turkey, in pursuit of what Işın calls the “exotic Orient.”

The earliest versions of lokum were flavored with rose oil, musk, almonds, or pistachios. These would have appealed to the taste buds of those who might not be able to travel to Istanbul, but still wanted a taste of a far-off place. Before long, their wishes came true: Importation to England began in 1861, when lokum was known as “Lumps of Delight.” Punch magazine ran a cartoon to herald the exciting occasion.

These Lumps of Delight were so popular they inspired specialty shops. In his final, unfinished novel, The Mystery of Edwin Drood, Charles Dickens takes his character Rosa on a visit to one. With such an elaborate retail structure at their disposal, consumers began calling for additional flavors. Soon, there were many versions, adding nuts, syrups, and flavorings, ranging from violet to orange to lemon. Many of these flavors are still available today, with new additions, including chocolate, among them. Traditionally, Turkish delight is packaged in a box, often hexagonal. The box is lined with wax paper to completely cover the pieces of candy and keep the powdered sugar from escaping.

The academic conversation surrounding Edmund’s Turkish delight, the eventual reason that he sells out his three siblings to the witch, focuses mainly on one question: With the entire world of food and confectionery open to him, why Turkish delight? (This question is especially important to people who have tracked down Turkish delight expressly because of Edmund.)

Tim Richardson’s book Sweets: A History of Candy, puts to rest any possible doubt of the beloved stature of Turkish delight. He dedicates an entire chapter to his memories of eating it as a young boy, a special treat shared with his grandfather, and includes it as number seven on his “Top Ten Sweets” list. While it might not be everyone’s cup of tea, there is a strong market for it, roses and all (even, perhaps, especially).

While many people assume that Edmund was taken with a classic, rose-flavored version of Turkish delight, Lewis never specifies a flavor, only that it was “the best Turkish delight. Each piece was sweet and light to the very center.” Regardless of flavor, such a description implies that it was made correctly (and thus certainly not by a British manufacturer).

Lewis began taking notes for the story that would eventually become The Lion, the Witch, and the Wardrobe in 1939, when he and his household began receiving groups of schoolchildren fleeing the bombings of World War II. One refugee girl poked around a wardrobe in his home, unwittingly launching a series of beloved children’s books. But the book itself wasn’t finished until late in the 1940s, and it was published in the autumn of 1950, just in time for Christmas.

The lengthy timeline between setting and writing meant that Lewis, unlike Edmund, experienced wartime rationing. On July 26, 1942, confectionery was added to the list of items that required coupons from a ration book along with money to purchase. In addition, one needed to register at a shop before making a purchase, and when new stock came in, the lines were long and quantities limited. Not only were sweets hard to come by, even when you had the ration coupons, but the prices were also exorbitant. It was hardly the time for pounds of Turkish delight.

It makes sense that Turkish delight would have been on Lewis’s brain as he crafted a book where Christmas features as a main theme. In Narnia, it is “always winter but never Christmas,” a product of the White Witch’s evil magic. It makes sense to draw a parallel between this dismal fantasy and the stark realities of wartime. Rationing extended to timber, which made Christmas trees harder to come by, and confectionery rationing didn’t end until February of 1953—still well before the end of sugar rationing later that year. When the White Witch asks Edmund what he’d like best to eat, it’s entirely possible that Lewis was answering for him: the candy that would be most difficult and expensive to obtain. Edmund isn’t just asking the witch for candy, he’s essentially asking her for Christmas, too.

Austerity during the Second World War was hardly the time for pounds of Turkish delight.

Beyond this, it’s interesting to note that Narnia’s hero, Aslan, is named after the Turkish word for lion. Lewis’s fascination with reading, history, and culture might have prompted him decide to include a slightly Eastern influence on Narnia. For Edmund and the other Pevensies, Turkey would have been nearly as exotic as Narnia (and almost as impossible to return to).

In truth, many factors likely influenced Lewis’s choices on various details. Regardless, his decision to make Turkish delight Edmund’s heart’s desire has immortalized it in the minds of countless fans.

In the novel, Turkish delight serves a wonderfully humanizing purpose. For many readers, Edmund is an extremely unlikable character. He is dishonest with his siblings, eager for his own gain, and rather mean-spirited. But seen through the lens of displacement, worry over safety, and hardship, he becomes suddenly three-dimensional. No longer is he just a greedy jerk, but a child behaving the way many others might under the circumstances. For Edmund, Turkish delight represented a way to taste happier times, when his family was all together and the future was unmarred by world conflict. It is hard to blame him for reaching for the box the witch offers and filling his mouth as quickly as possible, to make up for lost time.