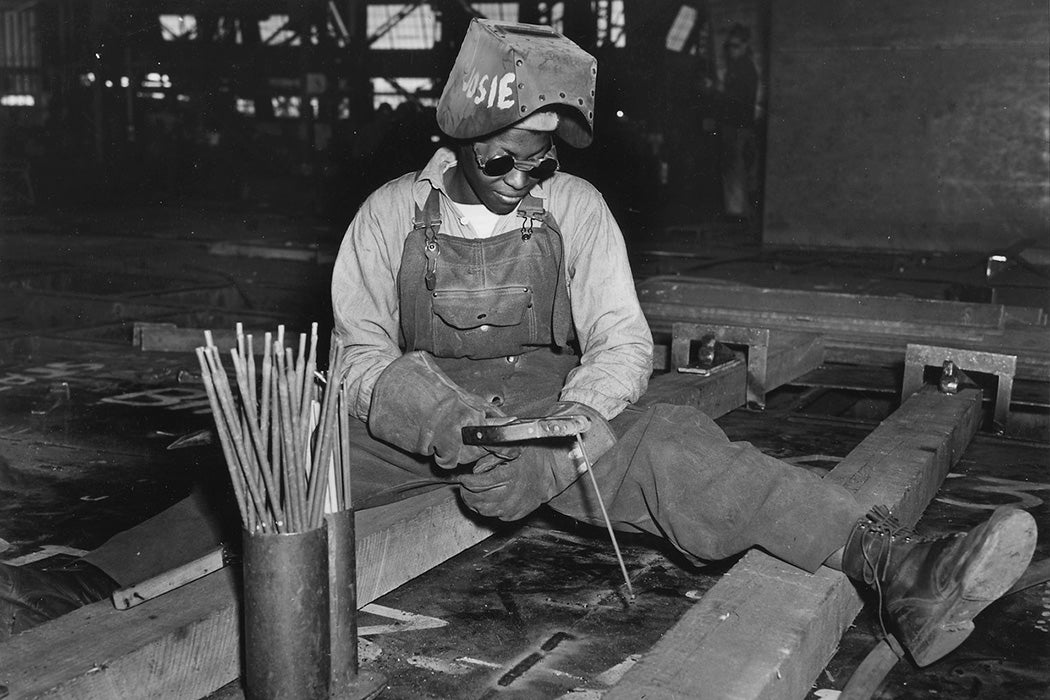 In 1941, the average time needed to construct a Liberty class cargo ship was 42 days. In 1942, the SS Robert E. Peary took just four-and-a-half days to launch from the laying of the keel. An average of one or two of these ships was launched every day during World War II from the eighteen shipyards contracted to build them. This incredible industrial output—overall, the wartime Emergency Shipbuilding Program saw 6,000 vessels built—has come to represent the US’s industrial might as production facilities ran 24/7 to defeat fascism in Europe, North Africa, and Asia.

But this chapter of the Good War/Greatest Generation rarely notes the enormous environmental and social costs of this crash industrialization. California’s East Bay, for example, saw rapid industrial sprawl and its concomitant pollution and ecological destruction. “The deleterious nature of welding gasses, metal dusts, lead, and asbestos used for ship construction,” writes scholar Alistair W. Fortson, affected former workers later in life. This was not unlike what happened to those then working in the production of nuclear weapons, he explains.

The arsenal of democracy, as US President Roosevelt termed America’s war industries, was also an arsenal of the American form of apartheid.

“Most damaging to the urban poor and populations of color,” writes Fortson, “the suburbanization of white wealth simultaneously removed vital tax revenues and businesses from polluted districts while encasing and limiting minorities to the most dangerous zones.”

Richmond was sold as a white workers’ paradise, but wartime (white) manpower shortages necessitated opening the factory doors to all comers. Richmond’s Black population, for instance, increased 227 percent between 1940 and 1945. This was even though “working conditions of African Americans were significantly limited” by the white craft unions. They got the dirtiest jobs and least protection from the dangers, meaning they paid the highest cost from occupational diseases.

“Work, promised on an equal basis, was instead doled out according to radicalized notions of ability,” writes Fortson. For example, “Chinese Americans employed by the shipyards labored in segregated crews dedicated solely to electrical installation.” This task, in addition to paying less than “heavier” work, exposed these crews to asbestos at a greater rate.

Richmond’s prewar population was 23,000. By the summer of 1943, it was 120,000. Municipal services like sewer and storm drain systems were overwhelmed. With the housing market beyond saturated, workers were literally living in shacks. Federally funded housing was built, but non-whites were denied access to it. Postwar racial segregation was baked-in by the public/private system of war production and its industrial waste.

“These realities of wartime emergency production—sacrificing long-term health and wellness for short-term gains on the battlefield—led directly to significant environmental injustice, polluting land and bodies in ways that continue to shape public policy initiatives and race relations,”  concludes Fortson.

How Much Did the Liberty Shipbuilders Learn? New Evidence for an Old Case Study
By: Peter Thompson
Journal of Political Economy, Vol. 109, No. 1 (February 2001), pp. 103–137
The University of Chicago Press
Victory Abroad, Disaster at Home
By: Alistair W. Fortson
California History, Vol. 94, No. 3 (FALL 2017), pp. 20–36
University of California Press in association with the California Historical Society

A longstanding idea about southern segregation is that it was more "intimate" than its northern counterpart. What's the truth?