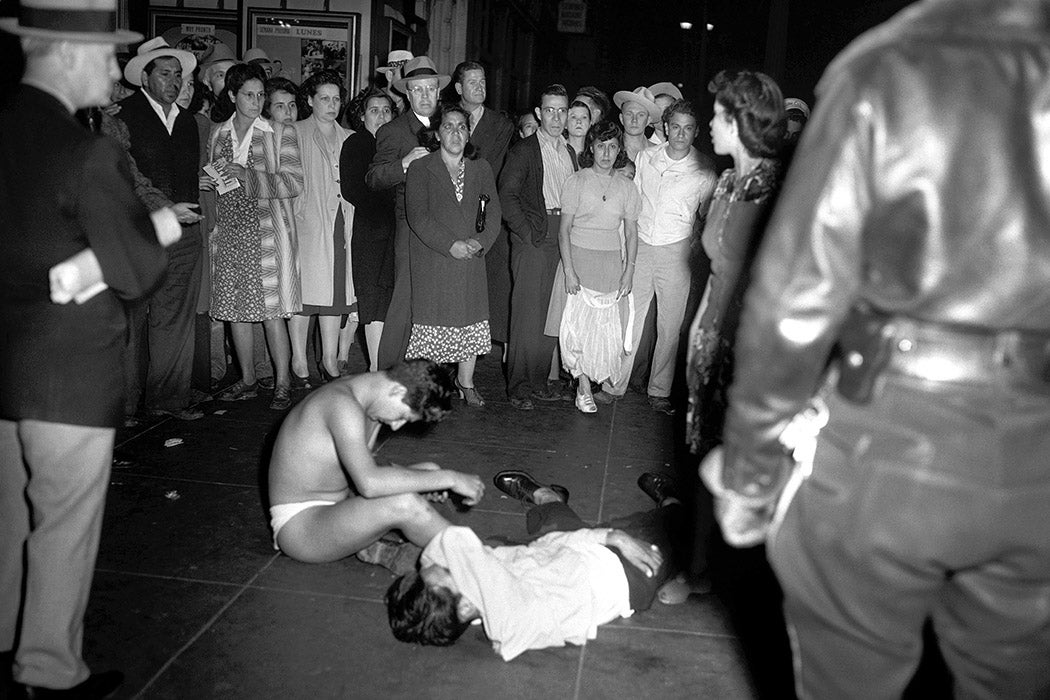 In the summer of 1943, white servicemen in Los Angeles assaulted zoot-suit-wearing Mexican Americans, Filipino Americans, and African Americans, stripping off their countercultural clothing and injuring perhaps hundreds. (Only a relative handful of servicemen were reported injured.) Similar attacks occurred in San Diego, Detroit, New York, Toronto, and other cities. Notably, white zoot-suiters were not harassed. What are usually called the zoot-suit riots were, in fact, race riots.

Historian Douglas Henry Daniels explores the zoot suit’s cross-cultural appeal among urban youth of the 1940s. The extravagant zoot style was the most visual aspect of the craze for jazz music and dance—and a mark of pride in outsiderness. Daniels calls the zoot’s spread a paradigm of the “profound effect African Americans had upon different ethnic groups in terms of their Americanization and acculturation to new styles of dress, popular music, slang, and dances.”

On the West Coast, this Black American style became a prototypically Mexican American one.

According to Daniels, the origins of the zoot craze are unclear, “although many indicators point to young black Harlemites incensed by racial prejudice at home during a war against Nazism abroad.”

Zoot suits were “sharp” outfits, consisting of high-waisted and tightly cuffed pleated pants, along with shoulder-padded, knee-length jackets. Accessories included long watch chains and wide-brimmed hats with feathers. Bandleader Cab Calloway popularized the style in his concerts and in the film Stormy Weather (1943). Malcom Little (later Malcom X) wore one as a young street hustler. In his Autobiography, he called it a “killer-diller coat with a drape shape, reet pleats, and shoulders padded like a lunatic’s cell.”

On the West Coast, this Black American style became a prototypically Mexican American one. In his memoirs, Cesar Chavez wrote, “we needed a lot of guts to wear those pants, and we had to be rebellious to do it because the police and a few of the older people would harass us.” Chavez also wrote that he wore it so that he wouldn’t be considered “square.”

The Mexican American pachuco subculture made the zoot their emblem. Southern California officials, meanwhile, treated the outfit as a mark of the delinquent and the criminal, a sign of gang activity. In 1942, the Los Angeles City Council passed a resolution outlawing the zoot. A roundup of people wearing zoot suits in early 1943 put hundreds in jail. “Whether it is the clothes that cause the crime or the crime that causes the clothes, we are going to eliminate the boys who support the sharp apparel,” thundered a local newspaper.

In Los Angeles, those who verbally and physically attacked the pachucos claimed that the young rebels were shirking military duty and wasting cloth, which was rationed during wartime. In fact, many zoot-suiters were too young to be drafted, and Mexican Americans served in the military at a rate comparable to their percentage of the population. The suits themselves were typically off-the-rack items reconfigured by specialized tailors to the zoot style.

The zoot suit represented a nexus of fashion, music, rebellion, and racial politics centered on sharply dressed urban youth. It helped set the stage for the cultural ferment of the 1950s: bebop and the Beats, the birth of the cool, and all the definitions of “hip” since.

Los Angeles Zoot: Race "Riot," the Pachuco, and Black Music Culture
By: Douglas Henry Daniels
The Journal of African American History, Vol. 87, The Past before Us (Winter, 2002), pp. 98-118
The University of Chicago Press on behalf of Association for the Study of African American Life and History