The Voynich Manuscript has mesmerized people ever since the man it’s named after, bibliophile Wilfred Voynich, brought it up for sale in 1912. 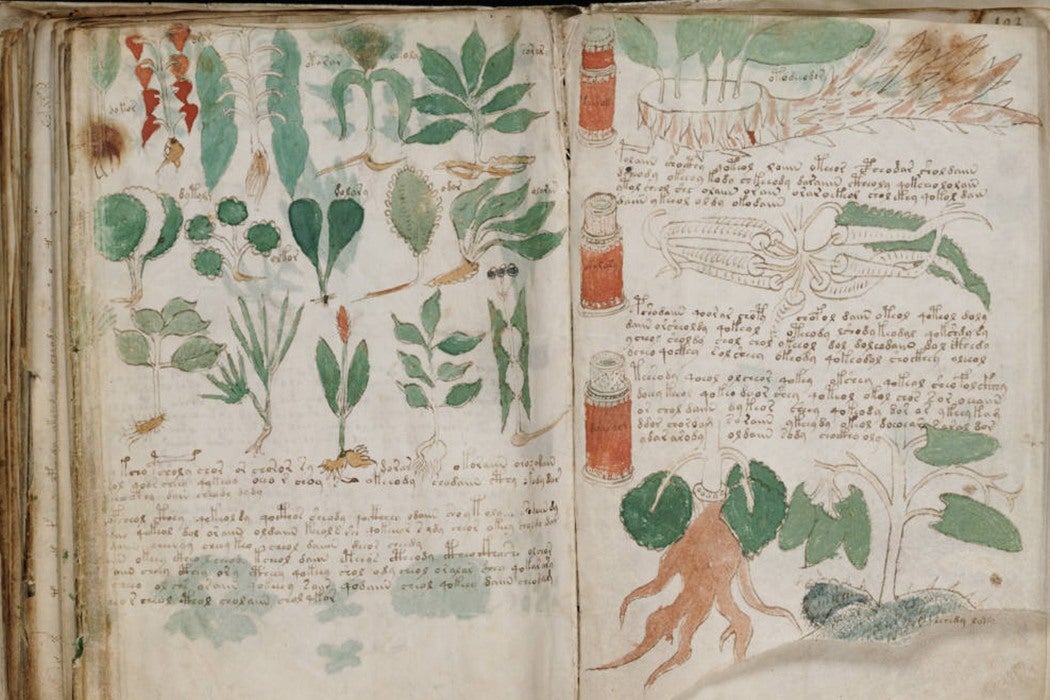 The world’s most mysterious book, the Voynich Manuscript, can now be anyone’s for a mere $8,000. Will one of its new owners be the first to actually read it?

The text, which is being cloned and replicated in a small edition by the Spanish publishing house Siloe, has mesmerized people ever since the man it’s named after, bibliophile Wilfred Voynich, put it up for sale in 1912. The beautifully illustrated vellum folio is rich with text, but here’s the problem. It’s in cipher. Nobody can read it, although many have claimed to over the years. Brilliant cryptographers and plenty of cranks have applied themselves to the task, and every few years an announcement is made that the cipher has finally been cracked. The truth is more like: not quite yet.

The manuscript caused quite a stir in 1921, when William Romaine Newbold said it was written by the philosopher and monk Roger Bacon (1214-1292). According to Newbold, Bacon made discovers centuries before the ones then recorded in history, using a telescope and microscope long before anyone else in Europe. Newbold’s interpretation caused some to start re-writing the history of science.

This 16th century manuscript has puzzled cryptographers for centuries. Can you crack the code?

A decade later, however, John Matthews Manly shredded the Bacon theory to crisp little bits, saying “Newbold’s claims are entirely baseless and should be definitely and absolutely rejected.” Manly’s main point: what Newbold claimed were tiny letters in “shorthand” (which only Newbold could read, by the way) were simply cracks in the old, dry ink.

A botanical clue revealed in the 1940s suggested that Manly was definitely on the right track: the pages include illustrations of pepper, sunflower, and a two other New World plants that no European of Bacon’s day could have know about. Since then, the vellum, made from calf’s skin, has been radiocarbon-dated to the first half of the 15th century, and authorship is now usually pinpointed to the book’s appearance in the late 16th century.

But none of this solved the riddle of the manuscript. Robert S. Brumbaugh, who has been looking at the thing for years, thinks it was a money-making scam by alchemist-astrologer-hucksters John Dee and Edward Kelley, who sold it to Emperor Rudolph II in Prague in 1586. Dee and Kelley plugged the Bacon connection because of the mystical abracadabra associated with the old monk by then. “I wish that I was wrong,” writes Brumbaugh, about it being “the free association of two astrologers with a desperate fundraising project.”

But that opinion hasn’t stopped the fascination with the manuscript, which has, unsurprisingly, a large internet following. The original is in Yale’s Beinecke Rare Book and Manuscript Library. It was donated there in 1969 after the then-seller couldn’t find a buyer, and is now one of that collection’s most popular items: Beinecke MS 408 can be “read” page-by-page by everyone. Let us know when you crack the code….

Infertility and The Art of Waiting

Our Friday Reads: a new book by Belle Boggs called The Art of Waiting.