The Thick-Billed Parrot Is Not Extinct–Not Yet

But one hasn’t been seen in the U.S. since 1995, not long after the end of the last reintroduction program. 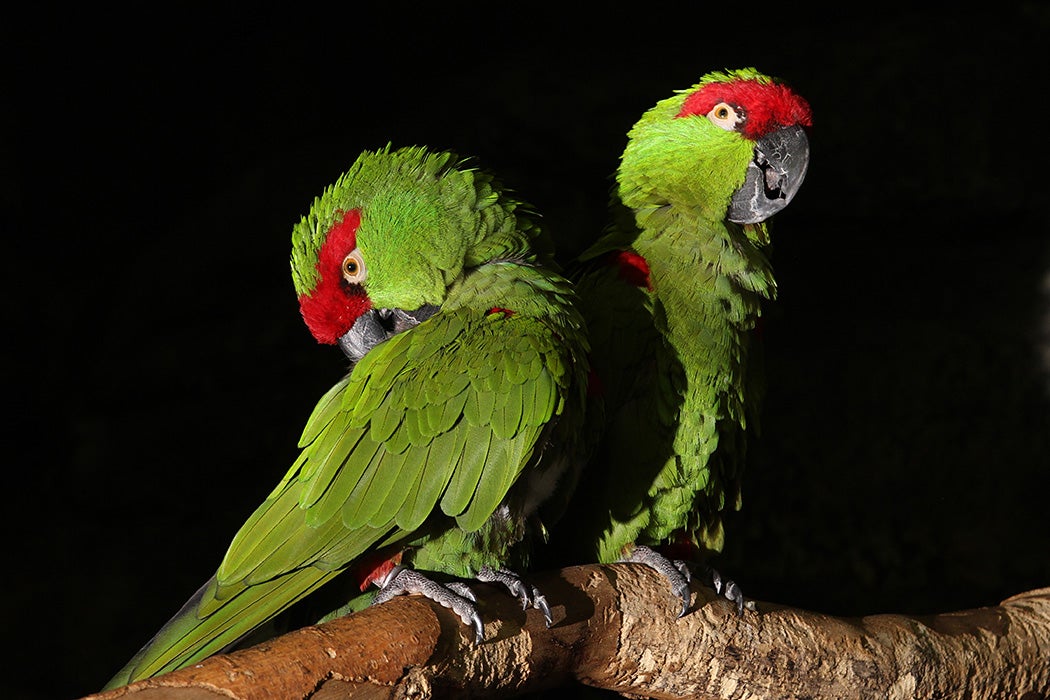 The last known Carolina Parakeet died in an Ohio zoo in 1918. The species was declared extinct in 1939, more than a century after John James Audubon warned that the birds “are very rapidly diminishing in numbers; and in some districts, where twenty-five years ago they were plentiful, scarcely any are now to be seen.”

The colorful birds were believed to be the only native parrot found in the eastern U.S. Now they only exist as museum specimens. A recent study confirmed their extinction was caused by humans. Far less known is the thick-billed parrot, the other native parrot species once found in the United States. This species had a much more limited range: central Arizona and southern New Mexico. They disappeared from these states by the 1920s.

Global extinction is what everybody thinks about, but extirpation—or local extinction—has a significant effect on biodiversity.

The thick-billed parrot is not, however, extinct—not yet. The birds can still be heard in the western mountains of Mexico. The population, at just a few thousand birds, is endangered by deforestation, climate change, and an illegal pet trade.

The extirpation, or local extinction, of a species from a region isn’t as dramatic as a global extinction. Global extinction is what everybody thinks (and talks) about, but extirpation has a significant effect on biodiversity. But because extirpation isn’t global, it can be ameliorated by reintroduction. Peregrine falcons, for one, were eliminated from the eastern U.S. because of DDT by the 1970s. Hand-reared and hacked (released) birds were the genesis of a successful reintroduction program whose results can now be seen flying in the skies over major American cities.

It took a combined effort of federal, state, and private organizations to reintroduce thick-billed parrots to the mountains of southeastern Arizona, beginning in 1986. An article in The Condor by a team of participants documents what happened.

The authors considered two questions. Had the species actually bred in the U.S. historically? Or were sightings attributable to the wide-ranging flocking of Mexican-resident birds? The consensus among ornithologists had been that the species didn’t nest in the U.S., but these authors argue that the “available historical information does not rule out the possibility” of a resident breeding population in southern Arizona.

But what was the cause of the bird’s disappearance in the U.S.? The team points to “wide-spread shooting” as the main culprit. “The Thick-billed Parrot is highly gregarious and noisy, and relatively large and tame, characteristics making it especially vulnerable to hunting,” they write. Prospectors in the Arizona mountains around the turn of the twentieth century also eliminated elk, pronghorn sheep, bighorn sheep, and wild turkey with their subsistence-hunting.

For the reintroduction effort, 88 parrots were released in Arizona’s Chiricahua Mountains between 1986 and 1993. Most of these were birds confiscated by the U.S. Fish and Wildlife Service from the illegal pet trade. The results of the reintroduction were mixed. Wild-caught Mexican birds relocated to Arizona had the best survival rates. Captive-raised birds the worst, “due mainly to deficits in foraging and socialization.” The researchers documented a few breeding attempts, suggesting their hypothesis about original breeding in the U.S. had some basis.

However, starvation and predation took a heavy toll on the released birds. Food was an issue because of the 1989-1990 draught and “the total failure of the ponderosa and Arizona pine cone crops in the region.” Predators included Northern goshawks, red-tailed hawks, and ring-tailed cats, all threats present in the Mexican mountains.

The thick-billed parrot is a very social bird, a “species that one might expect to be especially dependent on ‘critical mass’ efforts in keeping mortality rates at acceptable levels.” The authors write “the number of birds released in our experiments fell far below the numbers that would be optimal for reestablishing efforts.”

In our efforts to repair the damage we do, some efforts come up short. The reintroduction program was abandoned in 1993, and the last of the reintroduced birds was seen in 1995. While escaped or released tropical parrots can be found around the U.S., we’re back to where we were a century ago: without an indigenous parrot species to brighten the skies.