The Surprising History of the Kimono

The kimono that the world associates with Japan was actually created in the late-nineteenth century as a cultural identifier. 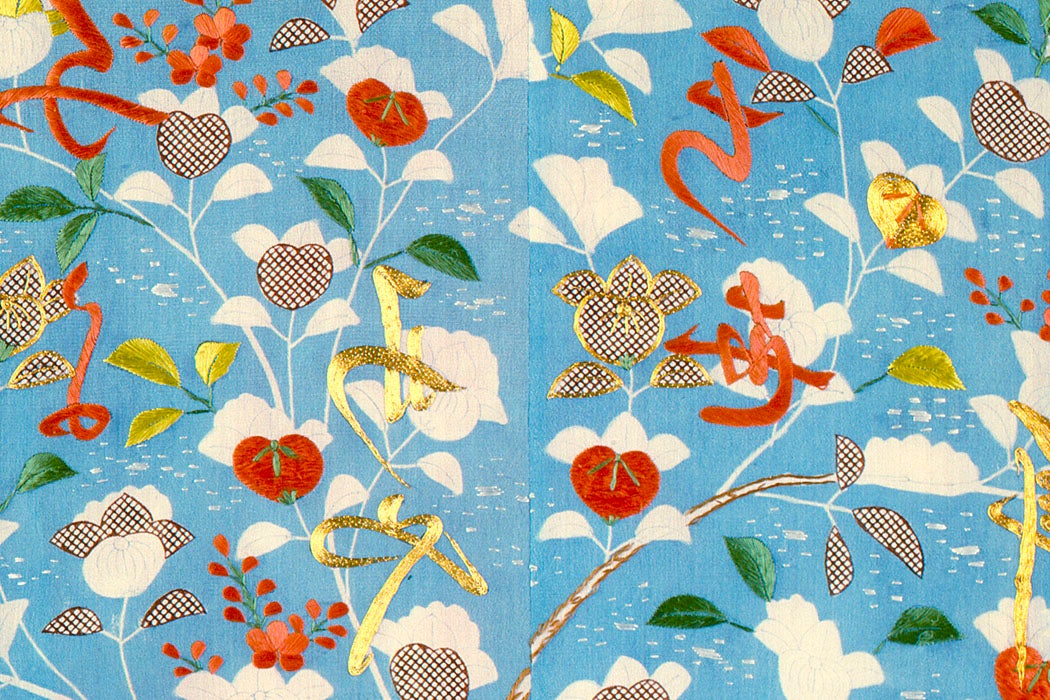 Kimono, in English, means “wearing thing.” But the garment everyone associates with Japan was not always called by that name. Its long history is one of the best examples of how clothing confers a sense of identity.

The first ancestor of the kimono was born in the Heian period (794-1192). Straight cuts of fabric were sewn together to create a garment that fit every sort of body shape. It was easy to wear and infinitely adaptable. By the Edo period (1603-1868) it had evolved into a unisex outer garment called kosode. Literally meaning “small sleeves,” the kosode was characterized by smaller armholes. It was only from the Meiji period (1868-1912) onwards that the garment was called kimono. This last transformation, from the Edo era to modern Japan, is fascinating.

In the early 1600s, First Shogun Tokugawa unified Japan into a feudal shogunate. Edo, renamed Tokyo in 1868, now became Japan’s chief city. The resulting Edo Period (also called the Tokugawa Era) spanned 264 years. The years 1603 to 1868 are known as the last era of traditional Japan. Japanese culture developed with almost no foreign influence during this time. And the kosode was one of the key elements of what it meant to be Japanese.

During the Edo era, kosode was a visibly unifying cultural marker. Every Japanese person wore it, regardless of age, gender, or socio-economic position. On those rare occasions when a Japanese person came in contact with foreigners, one visible distinction was that foreigners did not wear kosode. Edo kosode are therefore a window into a culture just before a fundamental change.

Each individual garment was the biodata of its wearer.

Like most societies, Edo period Japan was stratified. Since everybody wore kosode and the cut hardly changed during this period, messages were worked into the garment to announce its wearer. Style, motif, fabric, technique, and color explained who you were. They were also often subject to sumptuary regulations. This forged an intrinsic link between kosode and art and design.

Since the poorer classes wore their clothing to rags, almost none of their kosode remain intact. But the higher socio-economic levels of society were able to store and preserve theirs, and to commission new ones. And like other art forms—including painting, poetry, ceramics, and lacquerware — kosode adhered to aesthetic canons.

Perhaps the most important canon was using the explicit to denote the implicit. Naomi Noble Richard notes that a cherry blossom was not just a pretty design; rather, it symbolized mortal feminine beauty, so we can expect to see it on a woman’s garment, not on a man’s.  More than that, a refined woman would wear it for leisure, not work. This was true of most floral patterns. 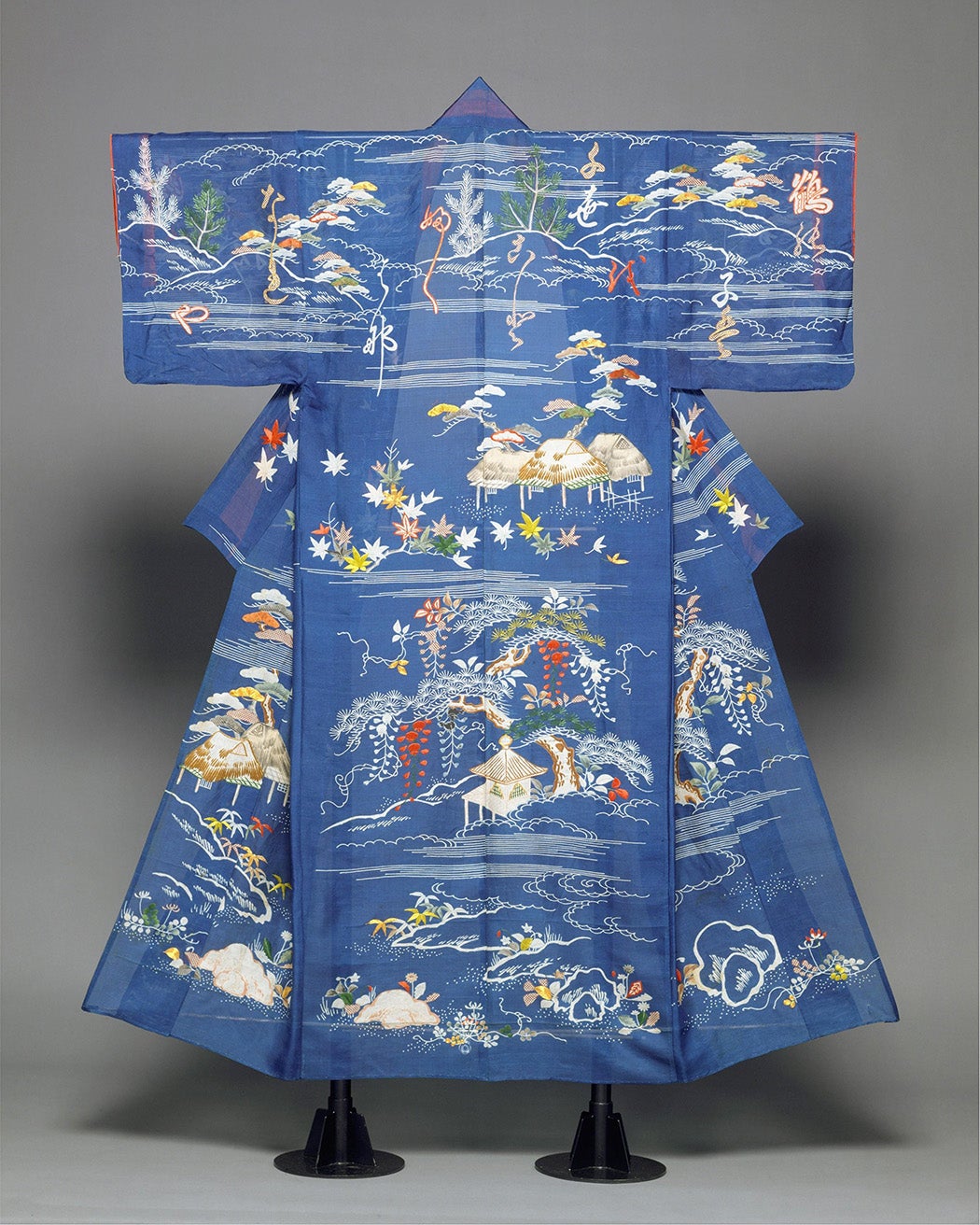 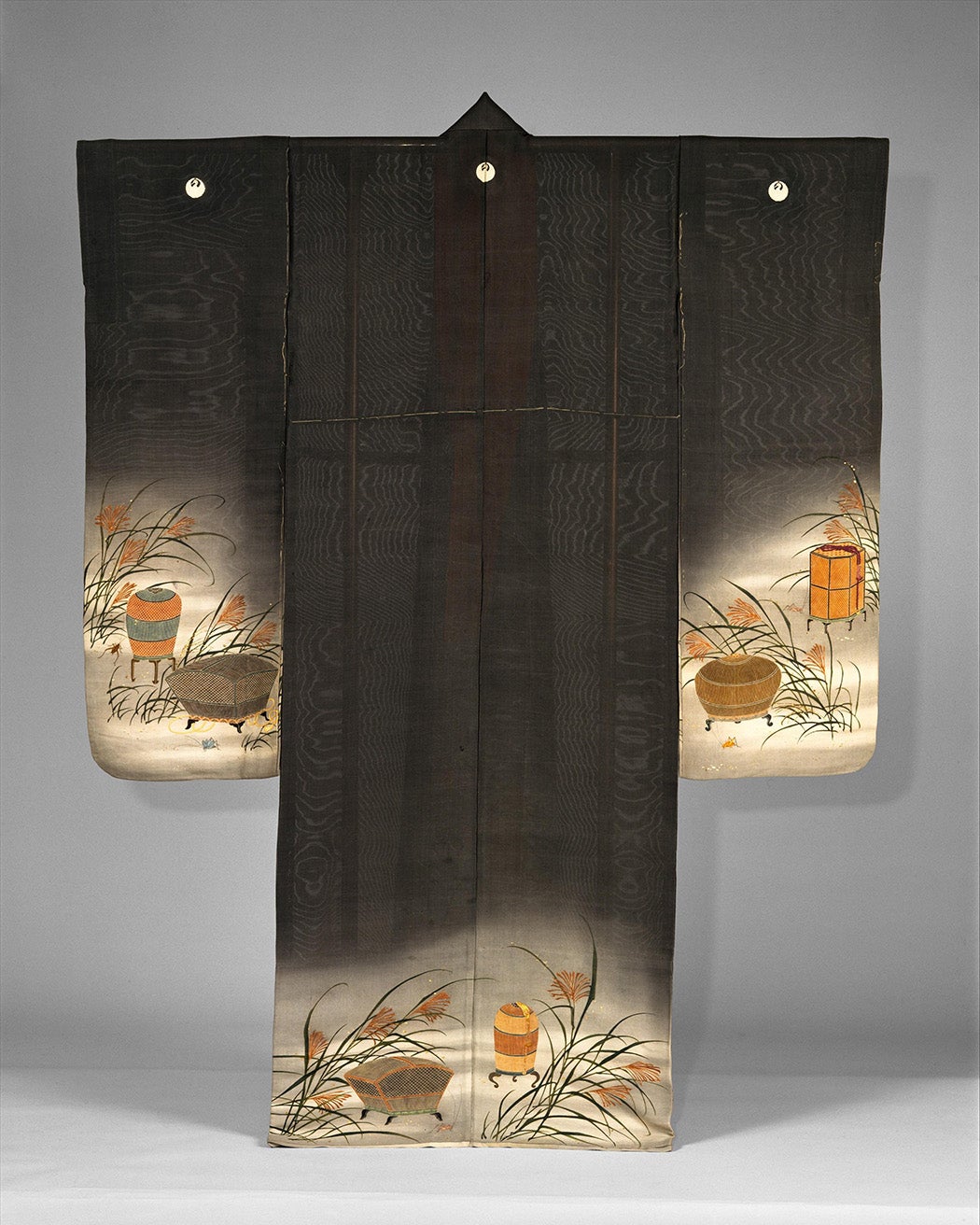 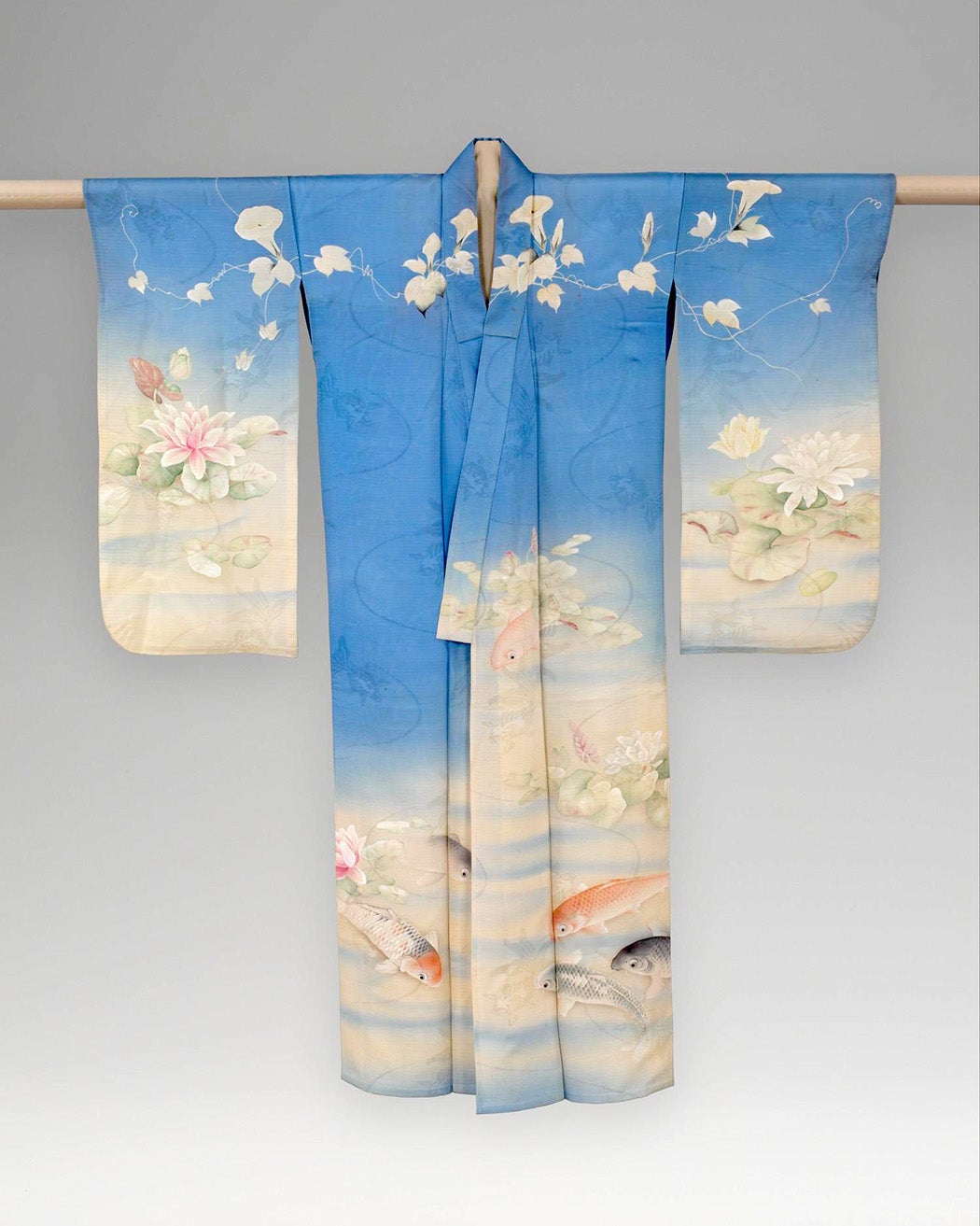 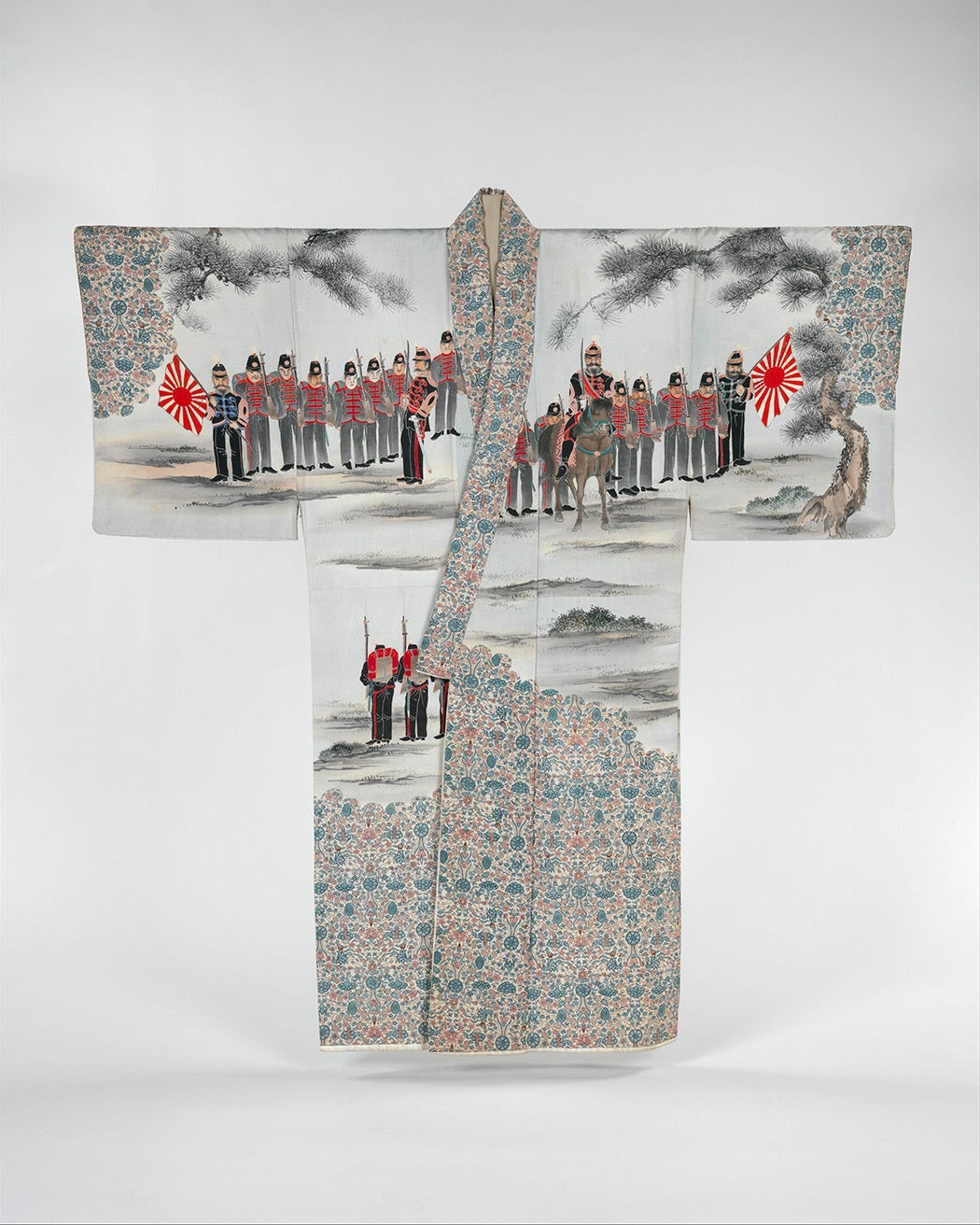 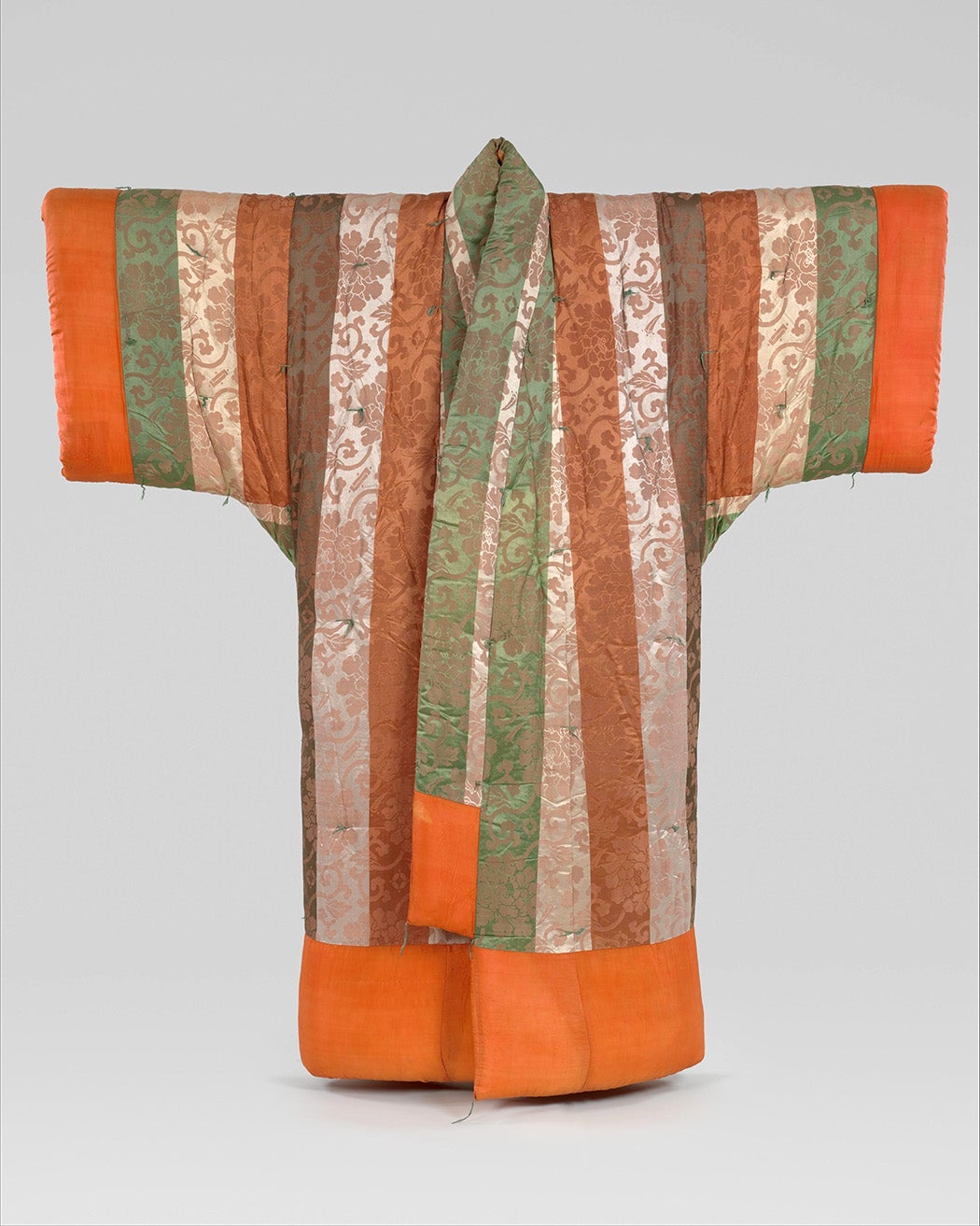 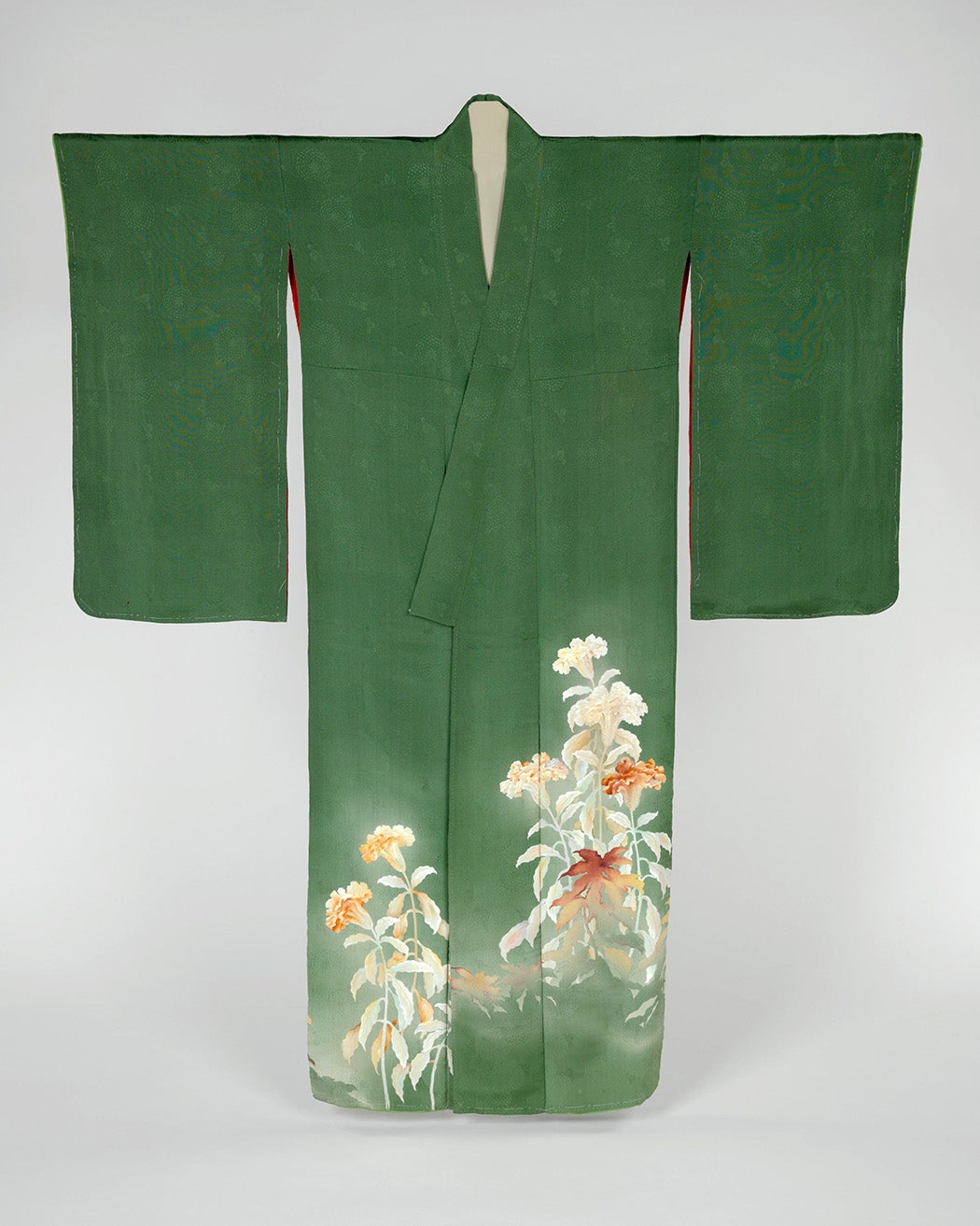 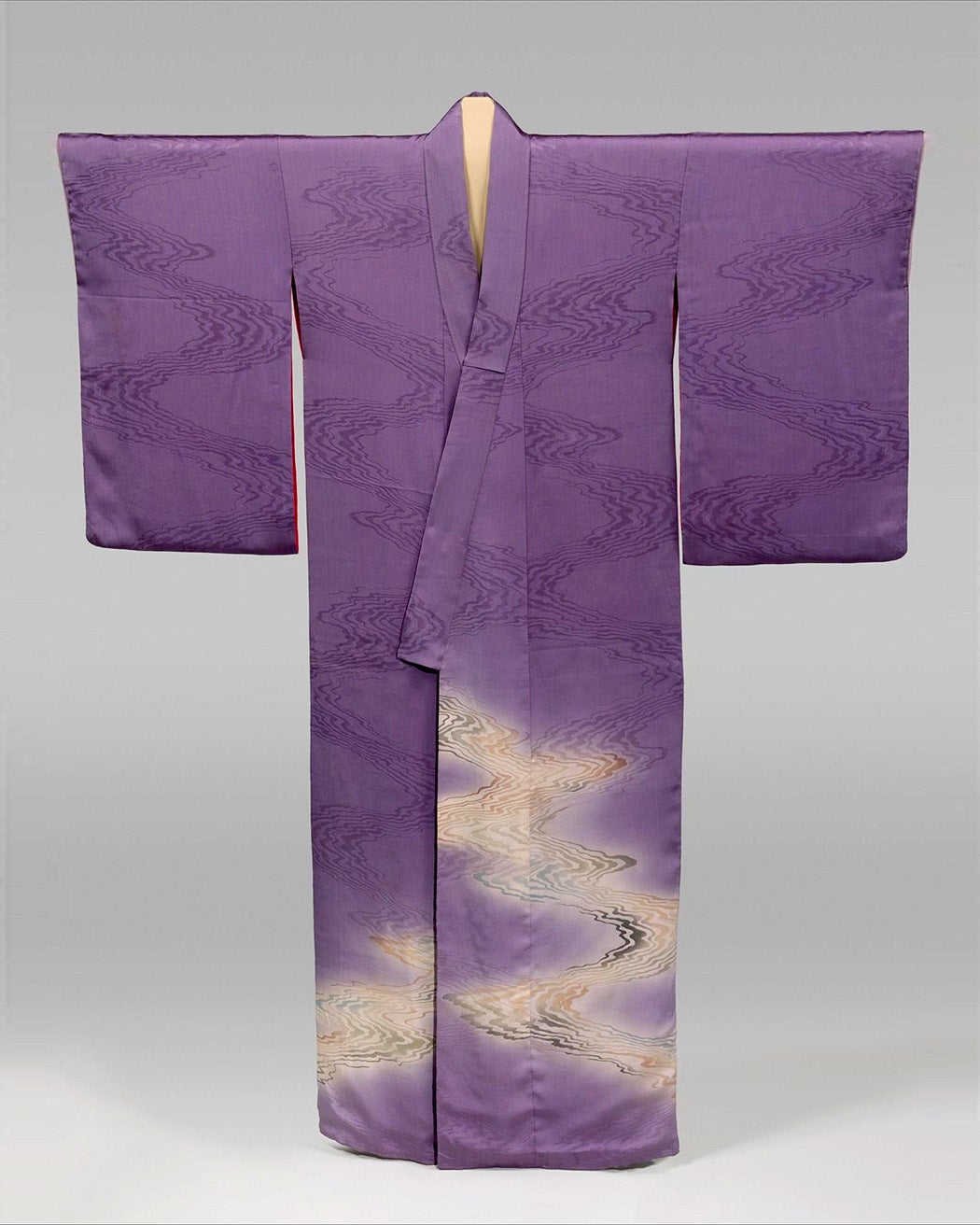 Fabric quality, choice of pattern, thread, paint, wood-block print, and color were essential criteria for presenting the rank, age, gender, and refinement of the person wrapped in it. And refinement was of particular importance. Use of kanji (Chinese characters) and scenes from Chinese and Japanese classical literature showed literary prowess. Richard explains that a wooden cartwheel, for example, would evoke The Tale of Genji, or even allude to a scene in a Nō play (only select aristocrats were invited to watch Nō plays).

There were so many intricacies involved in early modern kosode that design books were essential. Everyone consulted these Hinagata bon (design/pattern books)—from the commissioning client to the textile shop owners to the designers.

The first Hinagata bon that we know of dates from 1666 and is called Shinsen O-Hinagata (A New Selection of Respected Patterns). That the most respected artists of the age, ukiyo-e (floating world) artists, wrote Hinagata bon emphasizes how kosode were actual works of art.

Each individual garment was the biodata of its wearer. In the same way, Edo kosode and Hinagata bon are the biodata of an age. By wearing art, early modern Japanese left us a remarkable insight into their world and into what it meant to be Japanese before foreign influence.

Which explains how the kimono as a garment embodies so much about what it means to be Japanese.  And why it became so important to post-Edo Japan. The kosode-cum-kimono kept part of traditional Japan alive in a time of rapid modernization and foreign influence. The Meiji period simply renamed it the “wearing thing.” And they encouraged women in particular to wear it. To put that into context, at the same time, Meiji law encouraged men to wear Western clothing, and demanded it for government officials and military personnel at official functions.

So as Japan was undergoing a fundamental change on multiple levels during the Meiji period, Japanese women wearing kimono were a reassuring, visual image. The kimono became a visible yet silent link between between woman, mother, and cultural protector. Even today, the kimono is a reminder of Japan’s core culture as it was just before its fundamental change.

Editor’s note: This article originally stated that women wore kimono with cherry blossoms in summer. In Japan, cherry blossom kimono are worn in spring. The text has been corrected. 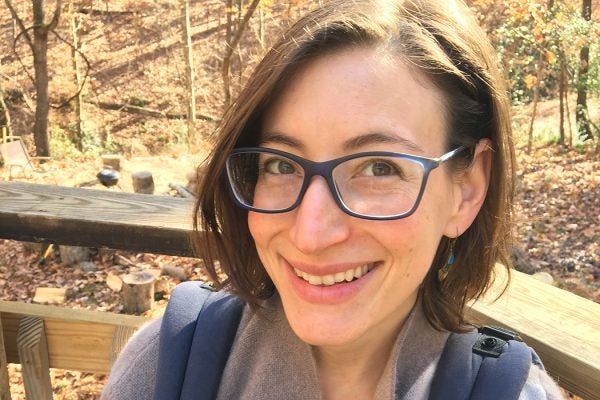 An interview with scholar and folklorist Gabrielle Berlinger, a professor of American Studies at the University of North Caroline Chapel Hill.