Human rights discourse drawing on ancient Sanskrit texts focuses more on the responsibilities of individuals and states than on the rights themselves. 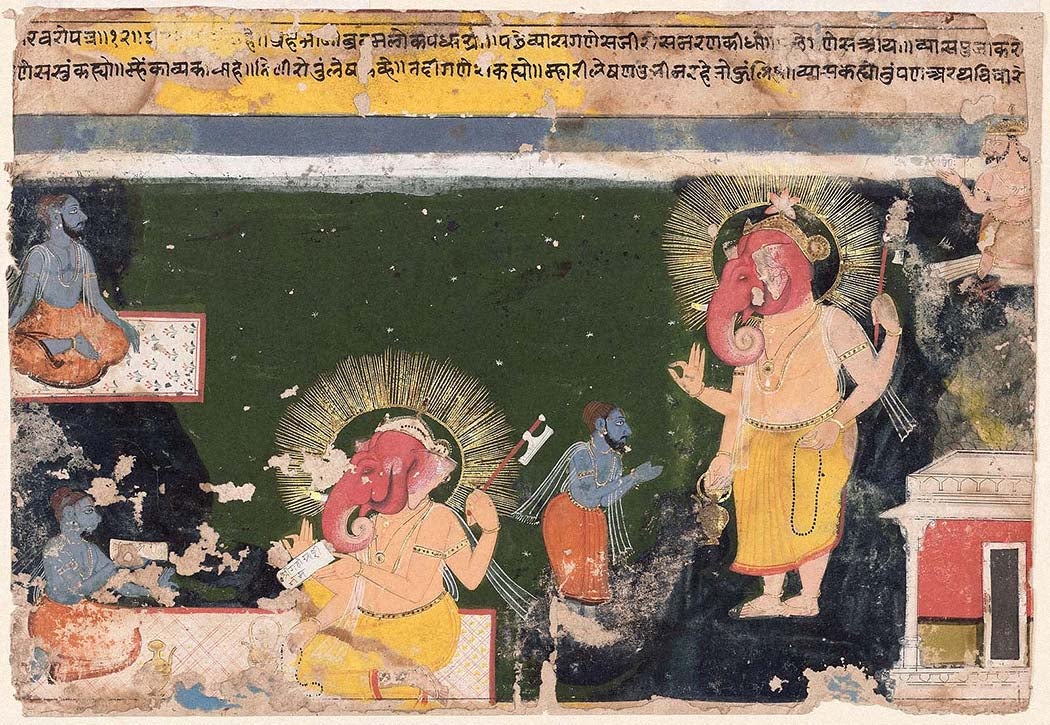 Ganesa writing the Mahabharat, dictated by Vyasa. Page from an illustrated manuscript of the Mahabharata
via Wikimedia Commons
By: Livia Gershon
3 minutes
Share Tweet Email Print

In the United States, we often trace the history of thought about human rights from the Magna Carta, through John Locke and other Enlightenment thinkers, and up to various UN declarations regarding universal principles. But, as political scientist Abhay Vikram Singh writes, India has its own history of philosophical conceptions of human rights that sometimes parallels the European one and sometimes travels in a very different direction.

Singh writes that the sacred texts known as the Vedas, written around 3,500 years ago, explicitly identify all humans as equals and declare that all have equal rights to food and water. The rules of dharma, built on the foundation of the Vedas, lay out responsibilities of both individuals and states to protect human rights, with more focus often placed on these duties than on the rights themselves.

“It was argued that if everybody discharged the duties, pertaining to his station in life, there would be no complaint of any wrong done to anybody,” Singh writes.

The ancient Hindu epic Mahabharata, compiled between the third century BCE and the third century CE, includes concepts much like the Christian “golden rule”: “Do naught to others which if done to thee, would cause thee pain,” and “What one loves for oneself, one must love for others also.”

But these thinkers tended to treat rights as concessions from rulers. As opposition to the British Raj grew in the early twentieth century, some radicals began talking about natural rights. In the words of the Indian independence movement writer Bipin Chandra Pal, “There are certain rights which governments do not create… they are primary rights, rights which are inherent in every individual human being.” Pal traced this line of thought not to Locke but to ancient Hindu texts, which he argued imply that every human contains the spirit of God, “and as God is eternally free, self realized, so is every man eternally free and self realized.”

Singh writes that Mahatma Gandhi tried to synthesize the liberal and radical schools of philosophy, seeking ideas that people from all parts of Indian society could support. He posited that rights were not created by the state but by individuals, based on their performance of their duties and devotion to the truth. Meanwhile, Indian socialist thinkers, both before and after independence, focused their conception of human rights largely on systemic issues such as ending poverty.

Singh concludes his article with an overview of international declarations and conventions on the rights of children. In line with the earliest idea of human rights in the Vedas, these often demonstrate how one party’s rights—like children’s right to nutrition, health care, and education—imply someone else’s duties.

Our Most Popular Stories of 2022