The Soaring Symbolism of Moscow’s Subways

Lofty ceilings, massive slabs of marble, and colorful mosaics celebrated Soviets in all their incarnations, from military leaders to collective farmers. 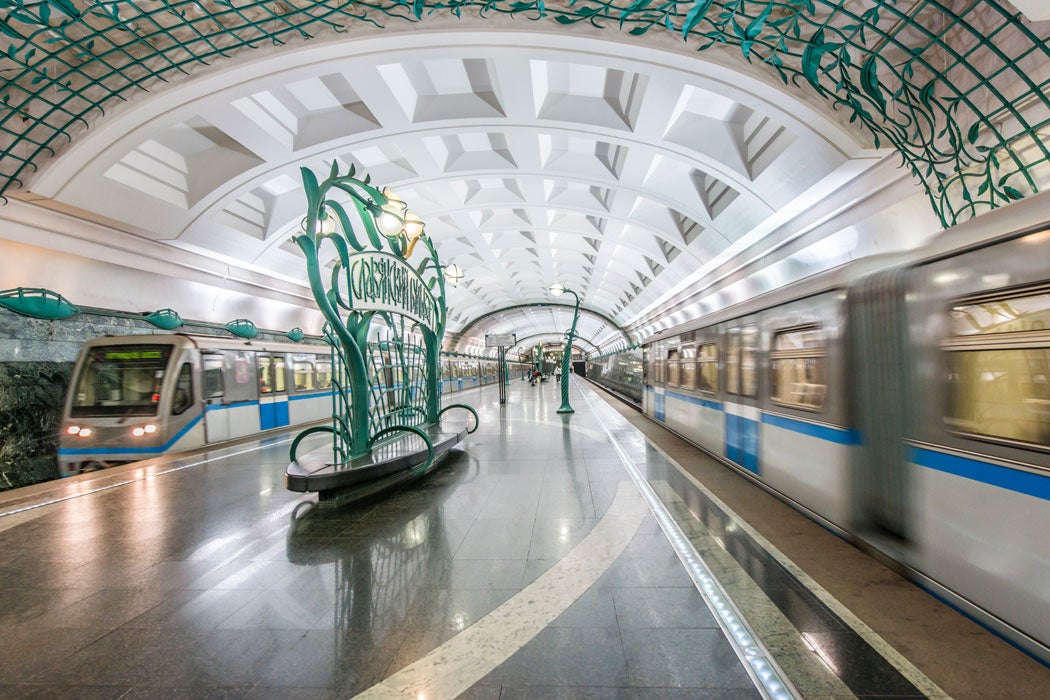 How did a subway system emerge as “a precision instrument for fashioning the Stalinist soul”? Those massive stations. The chandeliers and marble tiles. The triumphant mosaics. These flourishes define the Moscow Metro, known for aesthetically pleasing stations and lingering reminders of Soviet dominance. For historian Andrew Jenks, the luxurious Moscow Metro embodies the USSR’s play for the hearts and minds of Soviet peasants—and speak to the ambition and hubris of the Soviet experiment.

In the Moscow Metro, technology and culture collided to shape Soviet society in the age of Stalin. During this time, the Soviet Union’s cities became teeming metropolises not because of progress, but because of famine wrought by Stalin’s first Five-Year Plan. Between 1928 and 1932, the plan disrupted the structures of peasant society and forced a new modernity on the millions of people it displaced. They found themselves in cities that strained beneath the pressure of so many migrants.

In response, Soviet leaders decided to build something they barely knew how to construct: a subway system. It wouldn’t be easy. Not only did the USSR lack many of the resources it would need to undertake a massive public works project, but Moscow itself contended with quicksand and other geological challenges. And once the trains system existed, metro riders would have to learn how to conduct themselves in these new public spaces.

The subway, designed to shuttle Moscow’s poor laborers from point A to point B, nonetheless adopted aesthetics that upheld the supposed beauty of Soviet life.

The Soviet vision for the metro was one of communal service and soaring modernity. Goaded by propaganda and bolstered by the USSR’s new industrial might, the entire country rallied to help build the subway system. Though the project borrowed heavily from foreign innovations, it was Soviet through and through.

The subway, designed to shuttle Moscow’s poor laborers from point A to point B, nonetheless adopted aesthetics that upheld the supposed beauty of Soviet life. Lofty ceilings, massive slabs of marble, and colorful mosaics celebrated Soviets in all their incarnations, from military leaders to collective farmers. The subway system succeeded in moving thousands of bodies a day, but to Jenks its real success was in how it embodied the Soviet experiment. From the risky construction of the metro itself to the ways in which its escalators and mosaics conveyed Soviet values, the subway seemed to suggest that Communism was worthy of awe and reverence.

“Citizens absorbed the values and ethos of Stalinist civilization as they rode the metro and as they consumed its mythology,” writes Jenks. The Moscow Metro is now known as one of the world’s most beautiful—an aesthetic triumph that outlived the revolution it was meant to enshrine.

A Metro on the Mount: The Underground as a Church of Soviet Civilization
By: Andrew Jenks
Technology and Culture , Vol. 41, No. 4 (Oct., 2000), pp. 697-724
The Johns Hopkins University Press and the Society for the History of Technology