One of the many misconceptions about the ancient megalodon is that it was an extinct, larger ancestor of the great white shark. 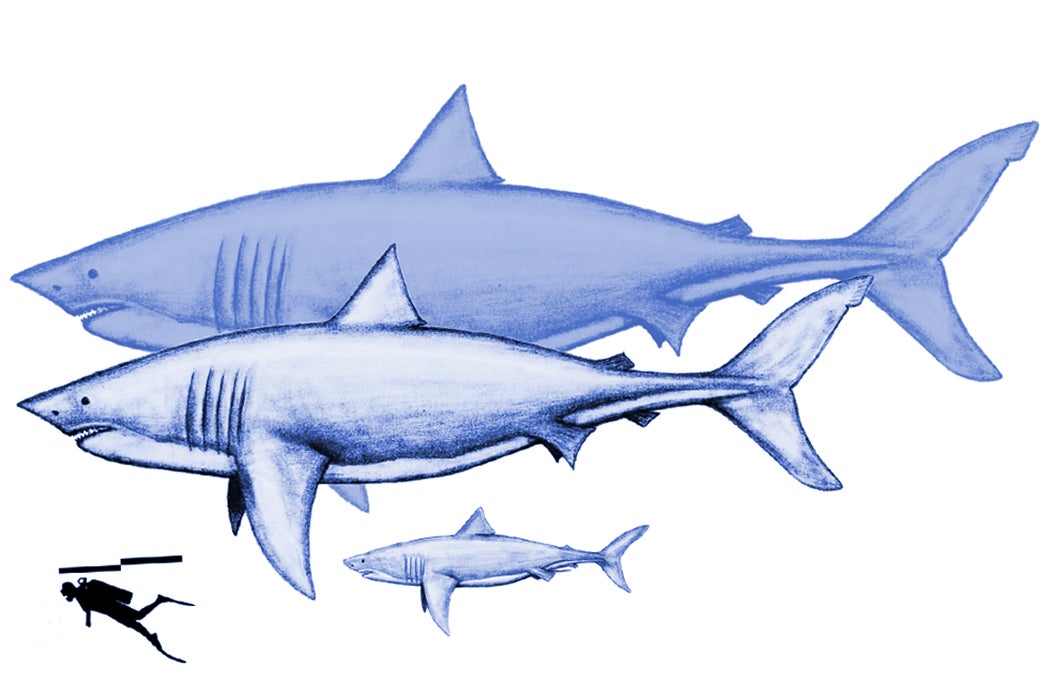 The new film The Meg offers an ancient update to Jaws: action hero Jason Statham faces off against a giant prehistoric shark, C. megalodon, which has been lurking in the uncharted deep. The megalodon (there is some dispute about its genus) is a huge relative of the great white shark that lived from about 20- to 2.6 million years ago, becoming extinct during the Pleistocene. Probably.

Fortunately for the filmmakers, they can take as much creative license as they like because very little is actually known about the megalodon. As explained by John E. Randall in Science, the only megalodon fossils that have ever been found are teeth and vertebrae. Sharks and their cousins the rays only have cartilage, not bones, so only hard or very solid parts easily fossilize. The upshot is that any information about such basics as length is extrapolated from the size of the teeth. Reconstructions of megalodon jaws are also based on (likely incorrect) guesses. Estimates of the megalodon’s length vary wildly. Randall, for one, believed that most length estimates were way too long.

Fossilized megalodon teeth were included in a ceremonial offering, indicating some degree of reverence for the monstrous fossils.

Another misconception is that the megalodon is an extinct, larger ancestor of the great white shark. While the meg was certainly larger, the two species were contemporaries. The megalodon arose earlier, according to Kathryn A. Dickson and Jeffrey B. Graham. The earliest records of the great white date to around 15 million years ago, overlapping for millions of years with the meg. The phylogeny of the two species is debated but they might not even be that closely related. They did share some similar habits; the finding of abundant juvenile megalodon teeth near Panama suggested that megalodon also made use of coastal waters as nursery areas for their young, much as white and other sharks do. And, as many great whites do, megalodon fed extensively on marine mammals.

Entering the realm of speculation, how might people have interacted with a megalodon? According to archaeologist Stephan F. de Borhegyi in The Southwestern Journal of Anthropology, in at least one instance fossilized megalodon teeth were included in a ceremonial offering, indicating some degree of reverence for the monstrous fossils. Furthermore, accounts from the early sixteenth century suggest that Pre-Columbian fisherman fearlessly pursued large sharks from small canoes, using wooden harpoons and small fishhooks. They were a couple million years too late to take on a megalodon, but much like Mr. Statham’s characters, prehistoric fishers were clearly brave and resourceful.