The Myth of the Noble Racehorse

Despite all the whips and spurs involved, nineteenth-century Americans believed racehorses loved a little manly competition. 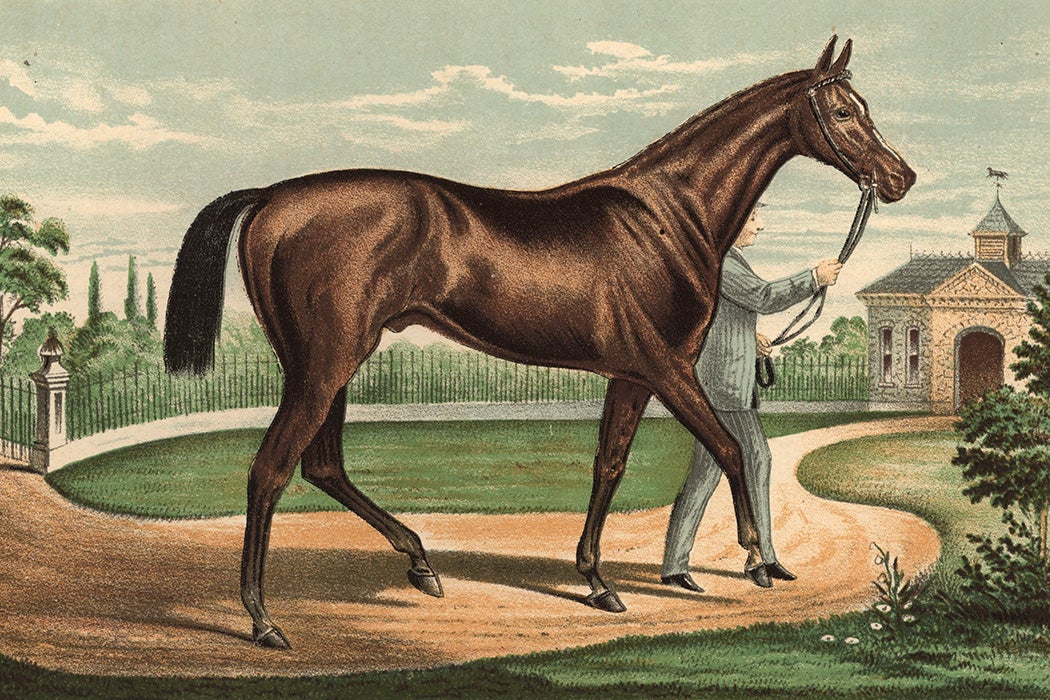 A horse is a horse, of course, unless it’s a nineteenth-century American game racehorse. Then it’s a wise, self-sacrificing creature, willing and eager to perform. Or so its elite owners and plebeian racing fans wished to believe. As historian Susan Nance writes, humans gave such horses “elaborate motivations” that “mirrored human ideologies of white masculine competition in both the marketplace and politics.”

Modernity has meant that we perceive a sharp difference between the human and the animal. Indeed, Nance argues that we now play the role of consumers and spectators when it comes to animals: “one’s ability to see animals as ‘performers’ seeking to flatter a human spectator lies at the very root of modern experience.”

“Consumers have consistently shown a desire to be protected from knowledge of the suffering and loss of life that animals endure in service to consumer capitalism.”

Among the former, Nance lists zoo captives, racehorses, pets, and service animals. Among the latter are “industrially produced food animals and mass-harvested sea life, laboratory animals, fur- and leather-bearing stock.” She notes that “consumers have consistently shown a desire to be protected from knowledge of the suffering and loss of life that animals endure in service to consumer capitalism.”

How do humans find a legitimate place in their sphere for animals that “defy” these two categories—like coyotes, rats, pigeons, and sharks? These animals, Nance says, are the “exceptions that prove how pervasive the consumer’s interpretive paradigm has become.”

The ultimate example of this process, says Nance, is the racehorse, which humans imagine is a willing entertainer fit for spectatorship. Nance explores the Anglo-American Thoroughbred tradition, which began in England with imported Arabian horses. After 1789, when a wartime ban on “Horse Racing, and all Kinds of Gaming” was lifted, the sport really took off in the United States. By 1900, most cities had racetracks, whether public or private, as well as off-track betting parlors.

The image of the heroic horse became fixed in the imagination. “In image and print portrayals…the racehorse became a knowing creature who sought to glorify and enrich his ‘wise’ owners and betters,” Nance writes. “The media in particular portrayed horses as courageous individuals with unique histories and lineages who mirrored their elite owners by striving to triumph in competitions; they were winners who looked men in the eye and invited them to enhance their personas with these equine victories.”

The horse’s complicity in this performance was assumed, even as jockeys used whips and spurs. People convinced themselves that the horses were doing it for them.

“The game racehorse was no herd or prey animal, but rather an individual with ambition and so had a unique name that set him or her apart from all the unnamed people who worked in the stables or at the racetracks to make his or her success possible.” Often, those “unnamed” workers were African American men.

Popular culture still echoes with a few famous horse names. But many other animals are left out of what we have convinced ourselves is a charmed circle of our friends.