The Horseshoe Crab: Same as It Ever Was?

The seemingly static appearance of these ancient-looking arthropods presents a challenge for scientists who want to study their evolutionary history. 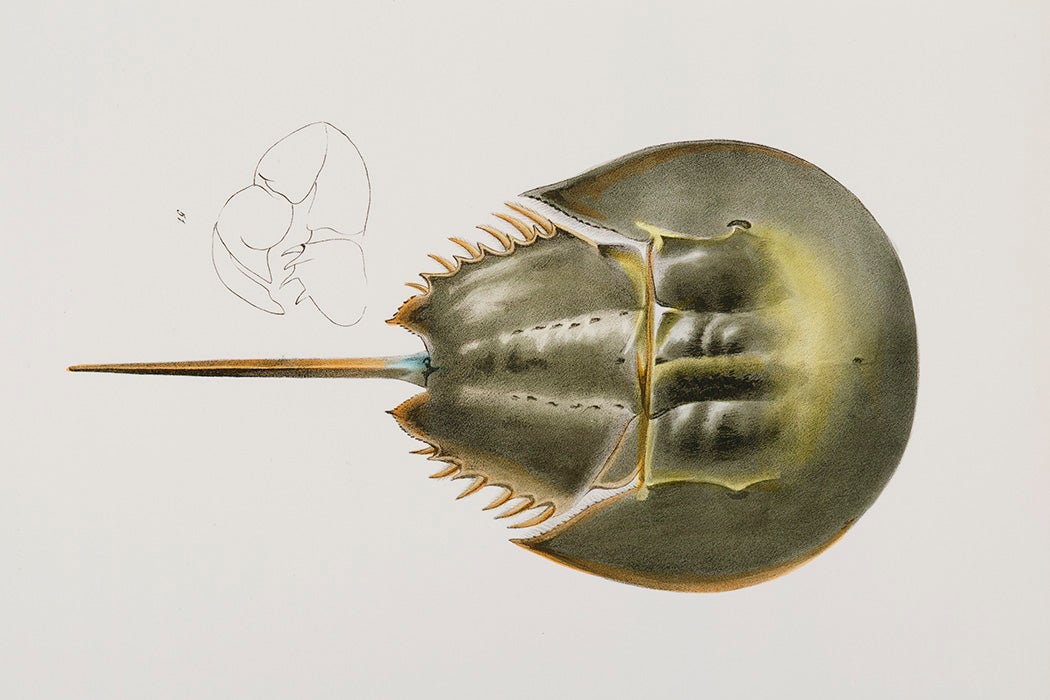 Horseshoe crabs are odd-looking, unassuming little critters that play a key role in the development of life-saving vaccines and medications. Drug companies collect them by the hundreds of thousands, hook an IV in between their plated bodies, and drain them of their alien-looking blue blood. A case of evolution gone wacky? Actually, horseshoe crabs have looked this way for millions of years.

Horseshoe crabs have undergone little morphological evolution during their 480 million–year history—the fossil record shows them to be virtually unchanged. “To gaze upon a horseshoe crab is to glimpse a prehistoric Ordovician sea of nearly half a billion years ago,” write evolutionary biologists Alexander J. Werth and William A. Shear.

It’s easy to assume that horseshoe crabs, and other living fossils, have simply been coasting through life untouched by the hands of evolution.

These ancient-looking arthropods are also referred to as “living fossils”—a term that presents a lot of opportunity for misconception. Alive today, living fossils look almost identical to their fossilized ancestors. The term, coined by Charles Darwin in 1859, also refers to similarly ancient-looking creatures like lampreys, lungfish, lycopods, and coelacanths. So just by looking, and without genetic information, it’s easy to assume that horseshoe crabs, and other living fossils, have simply been coasting through life untouched by the hands of evolution.

But molecular studies soundly debunk this myth about living fossils. The resemblance between horseshoe crabs today and ancient crabs of the past is almost entirely superficial. “There are no ‘unevolved’ species, no reanimated fossils that have literally come back to life, and no living organisms that are truly identical to extinct species known in the fossil record,” write Werth and Shear.

This apparent absence of evolution, also called morphological stasis, presents unique challenges for the scientists attempting to understand the evolutionary history of this scuttling creature of the deep. When scientists John C. Avise, William S. Nelson, and Hiroaki Sugita attempted to build a speciation history of horseshoe crabs, they reported that “at the molecular level […] living horseshoe crabs appear to be unexceptional.” When it comes down to DNA, these creatures have the same amount of genetic variation as any other species alive today.

Even with molecular data, the scientists admit that the four currently surviving species of horseshoe crab are difficult to place in an evolutionary timeline. Their lack of physical change served only to “obscure phylogenetic relationships within the complex,” write Avise, Nelson, and Sugita. Without the obvious cues scientists would normally get from morphological changes across the fossil record, they’re still struggling to resolve the complete history of the horseshoe crab.

Why do horseshoe crabs still look basically the same as they did millions of years ago? “One [reason] is hitting on a winning formula early on; another is living in a stable, predictable environment where there is little competition for resources, which may initially be abundant,” writes Werth and Shear.

While scientists are now able to explain this apparent (yet misleading) lack of evolution, there’s still a lot we don’t know. Now, experts warn that this animal could be facing extinction due to overexploitation (especially as we search for a safe vaccine for COVID-19). It seems, unfortunately, that scientists may never fully understand the evolutionary mysteries of the horseshoe crab genome.