Americans in “The Great Resignation” and “Strikevember” are the heirs of the 1936-1937 sit-down strike by auto workers in Flint, Michigan. 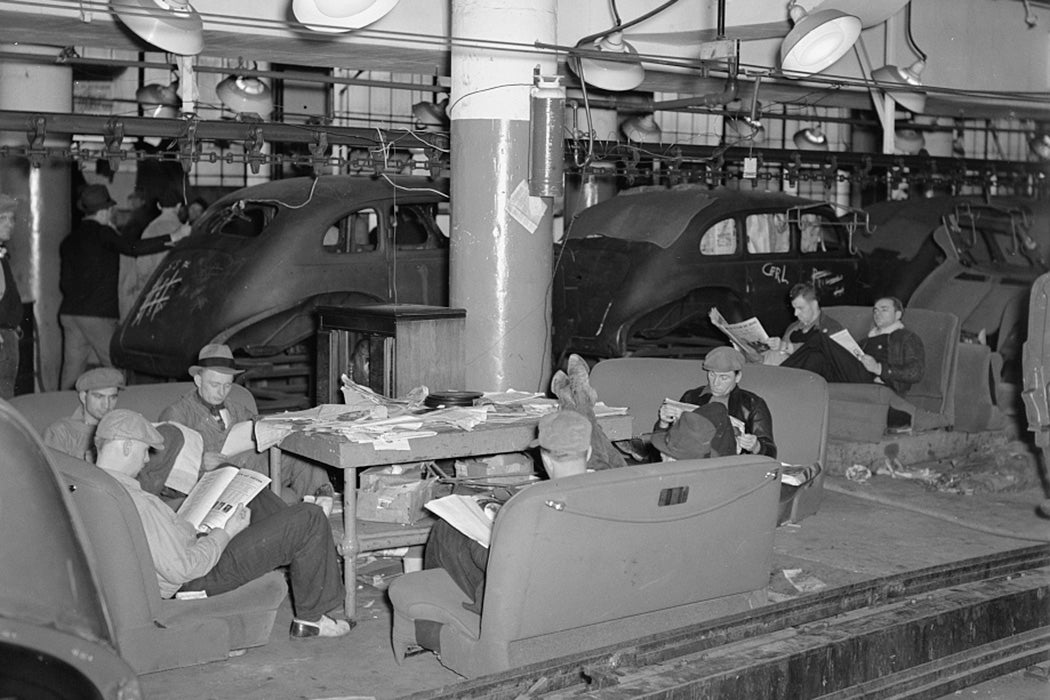 This fall has brought a wave of strikes, with workers seeking raises and better working conditions. They’re following in a long tradition, and one of its key moments was the 1936-1937 sit-down strike by auto workers in Flint, Michigan. Testimonies from those strikers and their family members, collected by Catherine Smith and her colleagues at Mott Community College in Flint, are a reminder of how much those strikers had in common with their counterparts today.

Some of the workers reflected on the terrible conditions at the plant before the strike.

“You couldn’t get a drink of water,” Joseph Martinus said. “You couldn’t even go to the bathroom. What I mean is, you was [sic] tied down that closely.”

“There were fumes… that made people sick,” Lena Demzik added. “You needed a job, so you did it.”

To keep control of the equipment, the workers needed to stay inside the plant.

Organizing with the United Auto Workers (UAW), employees of the major automakers banded together across different job functions, with “skilled” and “unskilled” workers all joining the union, seeking better pay and more control over their working conditions.

A strategic key to disrupting General Motors’ (GMs) business as usual was controlling dies, specialized machining tools that production depended on. When the union workers heard that GM was planning to move the dies from the plants, they called the strike.

To keep control of the equipment, the workers needed to stay inside the plant.

“We took the plant protection and walked them out,” Lester Kenney recalled. “And so we had command of the gates and the whole thing.”

On New Year’s Eve, Marian Snyder said, she went to the plant with a basket of food for her new husband and the rest of the strikers.

“I had known one of the security guards from school so I kept him occupied while Al dropped a rope down from the second floor,” she said. “I ran and tied the basket on that.”

On January 11, GM cut off heat to the Fisher 2 building, and barred people from bringing in food, prompting a confrontation between the strikers and police.

“I said ‘Now I am making a plea for all of you women up there to come down and stand beside us,’” Genora Johnson Dollinger remembered. “And this became the end of the battle…. They did not want to shoot women in the back.”

On February 2, a judge granted an injunction to evict the strikers. Ten thousand union supporters gathered outside Fisher 1. President Franklin D. Roosevelt told Michigan Governor Frank Murphy that he wanted to avoid an eviction, and talks between labor and management resumed on February 3. The strike ended February 11, after 44 days of occupation, with GM agreeing to recognize the UAW and promising workers the right to join a union without fear.

“And then it was an enormous celebration all over the city that night,” Shirley Foster said. “Flint would never know a feeling just like that again. Because it was the first breakthrough, and it was a national… almost an international breakthrough.”

The Flint Sit-Down Strike of 1936–1937: Remembered in oral histories by the participants
By: Catherine Smith
Perspectives on Work, Vol. 19, No. 1 (2015), pp. 34-37, 88-89
University of Illinois Press on behalf of Labor and Employment Relations Association