The Ethical Life of Euphemisms

Euphemisms can hide facts that need to be confronted. How do they work from a linguist’s point of view? 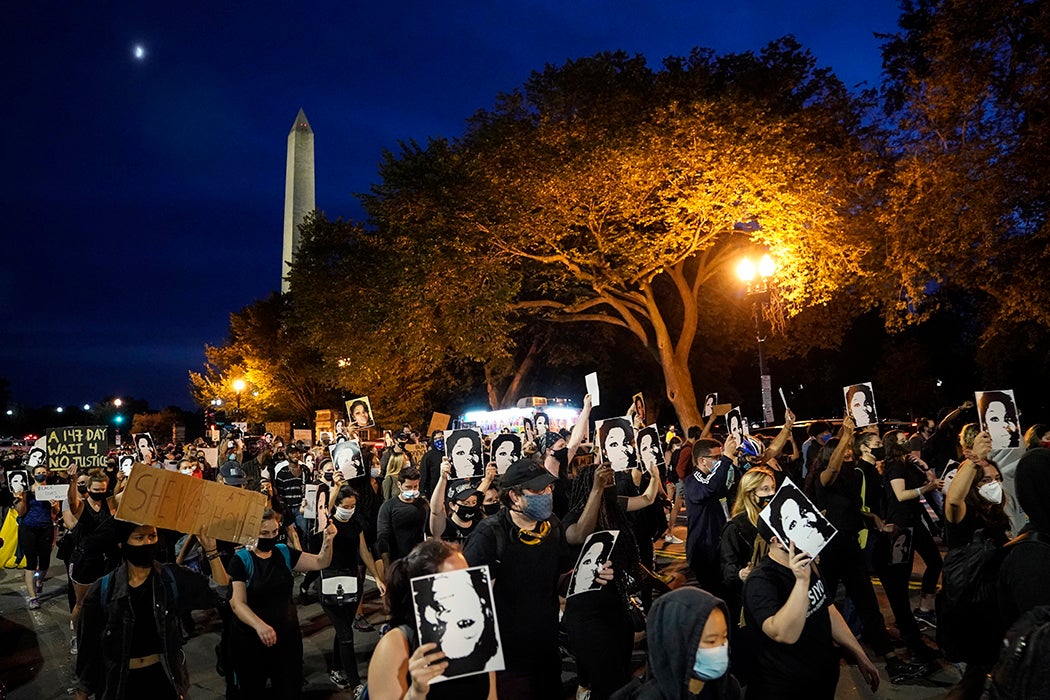 In March of this year, just as the pandemic was upending the way we live, a crime was committed. A young woman, whose name was Breonna Taylor, was killed, as an early local news report described, “inside a home […] in the middle of an officer-involved shooting. […] Police discovered Taylor inside the secured home, who was found dead from the gunfire.”

Through the linguistic fog, we can just about make out what happened, and who might have been the perpetrators of this crime. The public has grown increasingly aware of the power of language to uphold the powers that be, from politicians to police. Many have pointed out how unbalanced and troubling this kind of manipulative indirect language can be. Even when the facts are as clear as day, media reporting of crimes where the police might be the instigators uses language that obscures those known facts. Why?

Though it’s a fact that Taylor was in her own home, media reports can render it more impersonally as “a home” or “a residence,” subduing the horrific image of being attacked in the very place we tend to feel the safest.

We’ve heard of the so-called victimless crime, but can there be such a thing as a perpetrator-less crime? Who can we blame for these acts when our own language is used so often, so fearfully, to avoid naming names?

All human cultures have their secrets, taboo subjects that must not be mentioned, at least in polite society: the grubby experiences of being human, from bodily functions to how we function with each other in society. But what happens when we need to mention the unmentionable, as we so often do?

There’s a certain safety in indirect language and other linguistic methods of preventing the mud of the unmentionable from sticking to clean-living folk, or what Judith T. Irvine, in her essay “Leaky Registers and Eight-Hundred-Pound Gorillas,” calls a kind of “linguistic cordon sanitaire.”

For myriad reasons, we can use forms of indirect and coded language such as euphemisms (“officer-involved shooting,” “collateral damage,” “going to the restroom”). Euphemisms are supposed to be nice ways of saying not-so-nice things. According to one researcher, through euphemism “distasteful activities can lose their repugnancy, harmful conduct can be made respectable, and that which is socially unacceptable can be transformed into something socially approved.”

Passives can be used (by whom?) (such as “she was found dead from the gunfire,” “mistakes were made”), truncated to suppress the human agent until actions appear to simply happen, with no one responsible for them at all. There are other linguistic hedges, such as existential constructions (“there was a shooting”), or turning an active verb into an impersonal and important-sounding nominalization (such as “incarceration”). These are found in quite a lot of technical jargon, downplaying the impact of the very act itself.

We might also separate ourselves from unmentionable events by shifting the footing and the framing when reporting information, by putting those noxious words we’re too timid to voice into other people’s mouths. Or so they say. Or, says Irvine, we could shift the register, by talking about you know what and you know who in more formal, technical, or Latinate terminology (a well-known learnèd way of archly beating around the bush about the “naughty bits”).

The euphemism, one of the oldest forms of language, covers up the human condition. “Thus gentlemen dine, perspire, and expectorate while peasants eat, sweat, and spit,” as Irvine puts it. But euphemisms are not just for keeping up appearances as we Tom Ripley ourselves up the class ladder.

We use this kind of language often in an effort to be tactful, polite, and to avoid confrontation and minimize negativity, which are cooperative ways to communicate with each other—usually a good thing. By not taking a more direct linguistic stance, language can appear to be more neutral and objective, disconnected from the personal.

So what harm can there really be in the humble euphemism or its linguistically indirect colleagues?

Rather than reporting that, say, a politician told a lie, publications may prefer to use more roundabout phrases.

What some studies have found is that people are actually more likely to use euphemisms to save face socially than in consideration of the feelings of others. This, coupled with the desire to sound neutral, objective, and authoritative, can lead journalists to use euphemistic language to reframe a story obliquely, even when the facts themselves are indisputable. This can obscure or omit important information. Rather than reporting that, say, a politician told a lie, publications may prefer to use more roundabout phrases like the rather archaic “falsehood” or the technical-sounding “misrepresentation,” if they don’t avoid addressing it at all. By reframing events to sound more socially acceptable, to avoid the disagreeable, such tentative reporting not only reveals hidden biases and value judgments, it also can fall into ethical traps that have real-world and legal repercussions.

Researchers Caitlin M. Fausey and Lera Boroditsky ask the simple question “When bad things happen, how do we decide who is to blame and how much they should be punished?” The language of police reports, legal statements, and public discussions can include active phrasing with an agent, but also passive or indirect constructions with no agent. Can the differences between these constructions influence our ideas of who is to blame, how much we blame them, and how financially liable we think they are as a result? Even if it’s a well-known event we can observe with our own eyes, the answer is: probably.

“For example,” Fausey and Boroditsky write, “in the 197,745 trials held between 1674 and 1913 at London’s central criminal court […], cases with the agentive phrase ‘broke it’ in the court records resulted in a guilty verdict more often than did cases with the nonagentive phrase ‘it broke’ […]. In the most serious of cases (when the charge was ‘killing’), the transitive/intransitive contrast as marked by different verbs also predicted verdicts. Saying ‘killed’ resulted in more guilty verdicts than did saying ‘died’.”

Because it’s impossible to tell whether these historical cases were just due to reports tending to use more active, agentive language when the perpetrator was clearly more guilty, the researchers set out to test the impact of this kind of language framing. Hundreds of informants were asked to view certain reporting about the infamous Super Bowl “wardrobe malfunction” incident, in which Justin Timberlake ripped Janet Jackson’s costume a little too shockingly. The outcome was that Jackson was publicly blamed and shamed, CBS was fined half a million dollars for public indecency, and Justin Timberlake, whose actual fault it was for doing the ripping, went on to have a long and storied career. The linguistic experiment found that just changing the language had a strong impact not only on how people viewed Timberlake’s culpability but also on how much they believed he should be fined. When reports of the incident used more direct language, people believed Timberlake should pay an extra $30,000 in fines. This was 53 percent higher than what people thought he should be fined when the reports used more indirect language. So, yes, language matters.

The research supports the fact that euphemisms and other indirect language can not only affect people’s perceptions of blame, it can also encourage unethical acts, because people tend to view actions as legal or appropriate when described euphemistically—presenting “bribes” as a “soft commission,” for example. Repetition of euphemisms can lead people to forget what ethical problems they once arose from, such as in phrases like “creative accounting” or “right-sizing,” which are wholly disconnected from any corporate illegality or ruthlessness.

The morality of the euphemism can certainly be complex, particularly when it comes to violent crime. On the one hand, traumatic experiences can be difficult for survivors and even eyewitnesses to articulate directly. But on the other, the very use of indirect, euphemistic, or coded language to ensure safety can also cause observers to downplay the seriousness of the crime and obscure the perpetrator’s responsibility for that crime.

In one serious case, researchers Kristen Lucas and Jeremy P. Fyke investigate how the indirect, euphemistic language used in the discourse around the Jerry Sandusky sexual abuse case at Penn State University enabled a “decade-long organizational cover-up that ran concurrently with Sandusky’s pattern of abuse.” In order to save face and avoid embarrassment and bad publicity for the football team, Penn State leaders used the ambiguous interpretation of euphemisms, such as “horsing around,” to conceal the facts of the case and downplay the severity of what was reported to them.

Though it was true that, shockingly, no one directly reported the crimes to the authorities, Lucas and Fyke point out that that doesn’t mean employees weren’t talking and trying to report the crimes to the university’s chain of command. This is not completely surprising, as research shows that organizations may often suppress dissent, and “subordinates often are fearful of engaging in critical upward communication, with some of the most cited reasons for remaining silent being fear of being labeled as a troublemaker, concern for ruining relationships, fear of being punished, or concern about the organizational hierarchy.”

When graduate assistant Michael McQueary first reported the sexual assault he witnessed involving then–assistant football coach Jerry Sandusky, possibly due to the upsetting nature of the event, his language was euphemistic, but he believed the meaning was clear. This meaning was semantically diluted and bleached as it moved up the chain of command, from euphemistic language such as “in the shower with a little boy,” “something was going wrong,” and “It was way over the lines” to, astonishingly, “horsing around,” “playful,” and “kind of wrestling.”

In the current debate about police brutality and racial bias, it is all the more important to be aware of what influence language can have on ordinary people’s lives. As Orwell once said, “[…] if thought corrupts language, language can also corrupt thought.” Though euphemisms and other linguistic hedges have their place in how we communicate, the repeated use of troubling euphemistic messaging, such as “officer-involved shooting,” does have an impact on whether perpetrators are ultimately held responsible for their crimes. Framing reports about crimes euphemistically, or omitting disagreeable information out of fear of offending, can certainly have an effect on how people understand the serious moral implications of a situation. It can also allow leaders to mindlessly act or to deliberately ignore ethical crimes while morally justifying their decisions based on more favorable semantics of a form of language that exists to hide the unpleasantly dark truths in human nature.

Idioms have a special power to draw people together in a way that plain speech doesn't.