The ship from Moby Dick was a fairly accurate portrayal of the multi-racial character of American whaling crews before the Civil War. 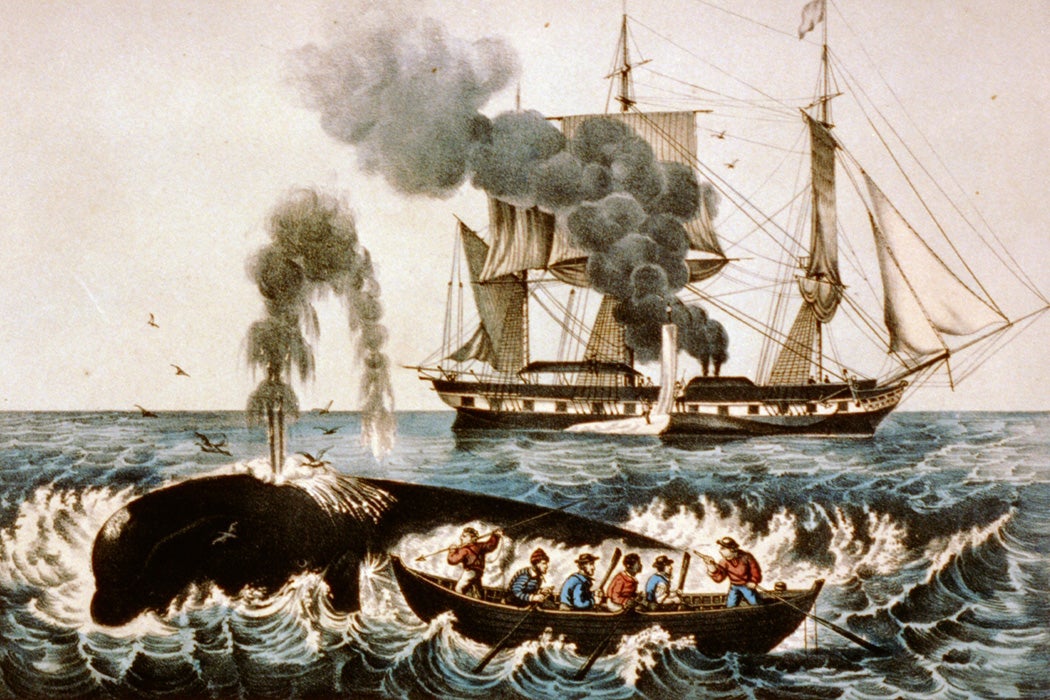 Herman Melville’s 1851 novel Moby-Dick; or, The Whale, is many things. Threaded through its tangle of metaphysics, monomania, and humor is a veritable manual of the American sperm whale fishery. Ishmael’s ship, the Pequod, was a symbolic microcosm. But was its multicultural crew actually an accurate representation of the industry? On the 200th anniversary of Melville’s birth, let’s take a closer look at these crews.

Native Americans were the first to hunt whales along the coast of what became New England. They showed European colonialists how to do it. When colonialists on Nantucket, the birthplace of American off-shore whaling, started going further out to sea to hunt whales, the original inhabitants of the island were well represented in their crews.

Native Americans from Massachusetts to Long Island served as petty officers and mates.

Some of them, as historian Nancy Shoemaker notes, were involuntary, victims of a cruel debt peonage system. Before about 1830, there were cases of natives kidnapped along the southern New England coast and forced to work aboard ships to pay off debts. Others, however, very much wanted the jobs. Shoemaker writes, “Because whaling offered coastal native men the most viable living, many voluntarily went whaling and took pride in their ability to succeed in the this industry.” Native Americans from Massachusetts to Long Island served as petty officers and mates.

At the same time, as historian James Farr writes, “Fugitives of many descriptions made their way to sea, hoping time and distance would hide their tracks.” These included enslaved people. Farr gives the example of Prince Boston, who self-emancipated himself during a voyage. Like other enslaved people, Prince Boston was originally put on a ship to work for his “owners.” But after the voyage, the Quaker ship captain paid Boston directly. Boston’s legal owners sued, and lost in court. Boston then successfully petitioned for formal emancipation. Crispus Attucks was another black whaler, of African and Native American heritage. On March 5, 1770, he was in the city of Boston on shore leave when British Redcoats opened fire on the demonstration he was participating in. He became the first American killed in the American Revolution.

Making a living hunting whales was not easy. As Shoemaker writes:

It meant being away from home for three to four years at a time, tediously trolling the seas in hopes of sighting a whale spout or breach. All while at great risk of being mauled in the jaws of a sperm whale, or, more commonly, falling from aloft, succumbing to fever or scurvy, or returning home empty-handed.

Crew members received “lays,” or percentage shares in the final take, meaning there were chances they’d end up with nothing if no whales were taken and boiled down for their oil. As Farr points out, lays for black crewmembers could be the lowest aboard ship. Crewmembers could also end up in debt because of cheating merchants and rapacious ship owners (most captains were also employees of the owners). “Men of all nations and races were fleeced with the same admirable evenhandedness,” writes Farr.

These were hardly utopias afloat. But Farr quotes John Allan, a black whaleman writing in 1857: aboard ship, there was “no distinction as to color.” Black harpooners, a critical position, were a mainstay of the industry. There were even a few black captains. Paul Cuffee, a son of an Ashanti man and a Wampanoag woman, became a very successful merchant and whaling ship owner. The famed Essex, an inspiration for Moby Dick, was sunk by a whale in 1820: of its crew of nineteen, six were black.

The 1850s saw the peak of the sperm whale fishery, with some 500 whaling ships. One in six men in this fleet was African American. But the end of that decade saw an industry-debilitating financial crisis and the 1859 discovery of oil in Pennsylvania. Petroleum would take the place of whale oil. At least for Americans, the commercial slaughter of whales dwindled down until the last whaling voyage in the twenties, precisely when Moby Dick was being revived as a great American novel.

Mr. Tashtego: Native American Whalemen in Antebellum New England
By: NANCY SHOEMAKER
Journal of the Early Republic, Vol. 33, No. 1 (Spring 2013), pp. 109-132
University of Pennsylvania Press on behalf of the Society for Historians of the Early American Republic
A Slow Boat to Nowhere: The Multi-Racial Crews of the American Whaling Industry
By: James Farr
The Journal of Negro History, Vol. 68, No. 2 (Spring, 1983), pp. 159-170
The University of Chicago Press on behalf of the Association for the Study of African American Life and History