The Cemetery Symbol of Eternal Love

Why did Victorian-era gravestones include so many images of clasped hands? 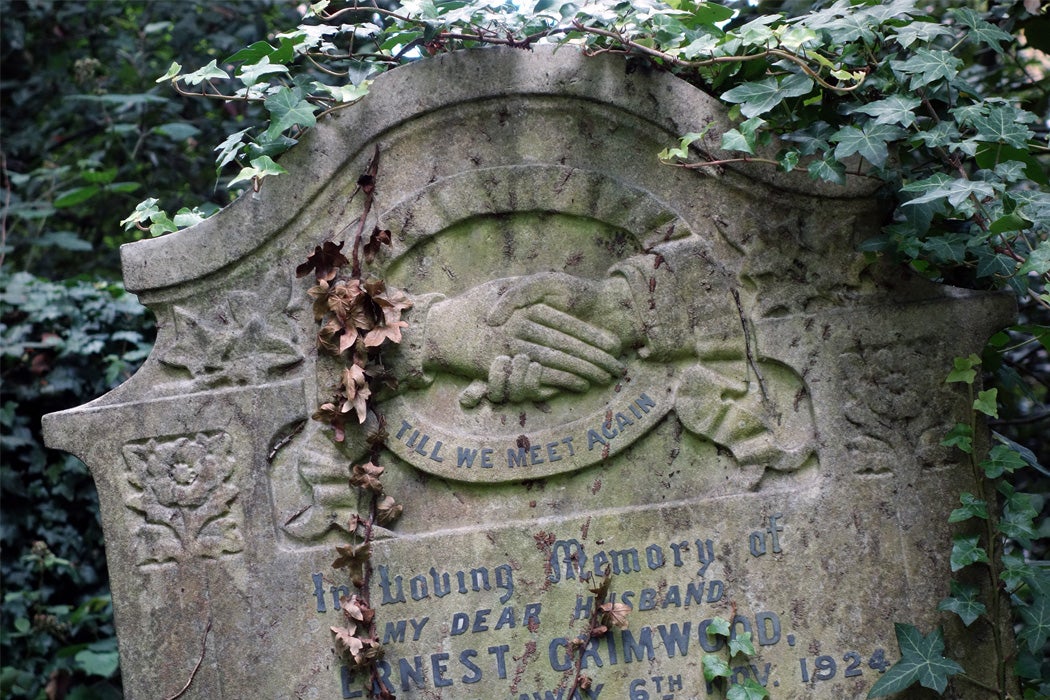 In the Victorian age, places of burial were filled with symbolism that communicated love’s bond beyond the grave. Lost family members were memorialized with life-size marble sculptures, so when the living visited the monuments, their presence would be felt again. Evergreen plants like ivy were carved in stone and shaped in metal, to remind visitors that death was a pilgrimage to a future reunion in eternity. And on tombstone after tombstone, clasped hands were depicted in a final embrace.

These symbols were very different from the grim skulls and flying hourglasses that dominated the graveyards of previous centuries in North America and Europe. As historian Lynn Rainville observes in Ethnohistory, the “[c]hanges in attitudes toward death during the Romantic Era crosscut religions.” Instead of warning the living of their mortality and the need to repent before the Last Judgment, this new gravestone iconography emphasized love and comfort. “In the 1830s the urn and willow motif was replaced by lambs, clasped hands, and laurel wreaths,” Rainville writes. “Most motifs suggested solace after death.”

The hands—almost always portrayed as right hands—were often incredibly detailed, with fingernails and the cuffs of clothing sculpted into soft marble.

This echoed the eighteenth-century Great Awakening, in which Protestantism shifted to a focus on salvation and a personal relationship to religion. These clasped hands were regularly accompanied with words like “farewell” and “goodbye,” but also “until we meet again.” The hands—almost always portrayed as right hands—were often incredibly detailed, with fingernails and the cuffs of clothing sculpted into soft marble. Frequently, one of these cuffs would be more frilly, suggesting a woman’s hand; the other was adorned with cufflinks, suggesting a man’s hand. Together they represent a husband and wife sharing a last handshake. One hand is usually flat and loose, its fingers extended. One can interpret this as either the deceased leading the living to follow them, or letting go.

In the Journal of the Illinois State Historical Society, researchers Gary S. Foster and Lisa New Freeland examine the clasped hands on nineteenth-century tombstones in a cemetery in Charleston, Illinois. “Fixed, though by no means universal, meanings proffered include the hope of meeting in eternity, a farewell to earthly existence, God’s welcome into heaven, friendship, solidarity, unity, partnership and matrimony, particularly if both masculine and feminine sleeves are present,” they explain.

While these Victorian symbols had specific meanings, this was also a time when funerals were becoming professionalized and tombstones were being commercially produced, spreading various motifs. Cemeteries, too, were no longer always associated with a church, and within these secular spaces, people were choosing imagery that resonated with them as individuals. While the handshake was most often used for married couples, it could also express fraternity, such as for members of societies like the Masons, or the connection between siblings or other family members.

The handshake, too, is an ancient symbol of devotion even at death, dating back to antiquity and appearing on Greek, Etruscan, and Roman funerary art. Classical art and archaeology scholar Glenys Davies notes in the American Journal of Archaeology that on these monuments “it had a persistent association with the ideas of parting and meeting, especially parting at death and reunion in the afterlife.”

The symbol continued into the twentieth century, with wedding dates sometimes added in granite below the hands. In one of the most dramatic examples, two hands reach over a brick wall in a Dutch cemetery. They represent a nineteenth-century married couple who were Catholic and Protestant, and were thus not allowed to be interred together due to the religious segregation of the burial ground. In this posthumous pronouncement of love, their tombstones are forever united.