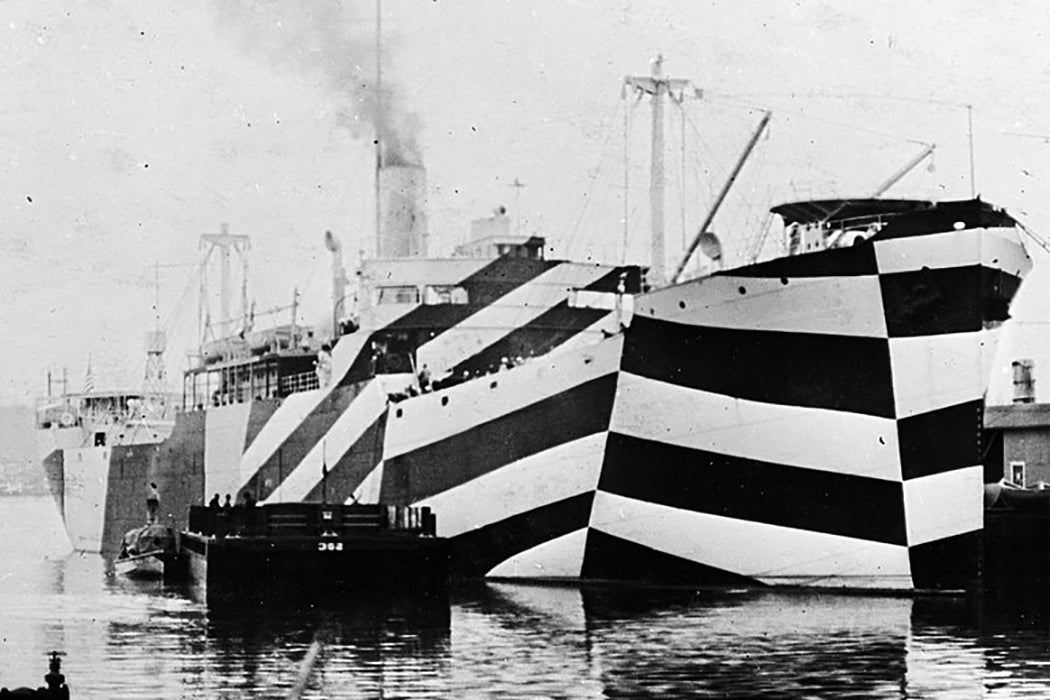 In 1917, German U-Boat attacks on British ships seemed unstoppable. The campaign of submarine warfare torpedoed hundreds of vessels. And unlike the U-Boats which could lurk beneath the waves, there was no hiding a ship with its smoke stacks and distinct silhouette, the changing light and colors of the sky and sea making camouflage futile.

Witnessing the carnage, artist and British naval officer Norman Wilkinson had an epiphany: “I suddenly got the idea that since it was impossible to paint a ship so that she could not be seen by a submarine, the extreme opposite was the answer — in other words to paint her, not for low visibility, but in such a way as to break up her form and thus confuse a submarine officer as to the course on which she was heading.” Thus “dazzle” camouflage — bold stripes, curves, and zig-zags in colors like black, white, blue, fuchsia, and green — was born. The frenetic paint job could baffle a U-Boat gunner, who wouldn’t be able to tell the direction or shape of the ship through his periscope. The element of surprise was also a factor, literally dazzling viewers into confusion as to purpose of the strange vessel cruising past.

Scholar and librarian Claudia T. Covert relates Wilkinson’s development of “dazzle” in Art Documentation: Journal of the Art Libraries Society of North America, writing that after receiving Royal Navy permission to paint a ship, he “found space for a Dazzle Department at the Royal Academy of Art in London.” There other artists got involved, including Edward Wadsworth, an outport officer and Vorticist artist (Vorticism being a British modernist art movement inspired by Cubism), who “supervised the painting of over 2,000 ships within one year.”

Dazzle was soon adopted by the American Navy, with over 1,000 “razzle dazzle” plans for ships, and artists like Everett Warner and Thomas Hart Benton working on designs. Theories about disruptive coloration as camouflage had already been introduced in the U.S. by artist Abbott Handerson Thayer in his 1909 book Concealing-Coloration in the Animal Kingdom.

Public reception for the carnivalesque fleets, however, was mixed. Critics called them “a futurist’s bad dream,” a “flock of sea-going Easter Eggs,” and “a cross between a boiler explosion and a railroad accident.”

Did dazzle work? In 1920, Wilkinson stated in the Journal of the Royal Society of Arts that one of the first reports of its effectiveness was that “the German Admiralty had dazzle painted a liner, and had attached her to the submarine training depot at Kiel.” Additionally “a number of the surrendered submarines were painted in precisely the same manner as our merchant vessels,” indicating the Germans had taken dazzle seriously.

Statistically, though, it’s unclear. In Leonardo, scholar Roy R. Behrens writes that “U.S. sources claimed that less than 1% of dazzle-painted ships were sunk by torpedoes,” but “when the British Admiralty set up a Committee on Dazzle Painting, it reported in September 1918 that there was no clear evidence that dazzle painting had ever confused a submarine gunner.” Nevertheless the report advised dazzle could continue because “it is not disadvantageous and indeed it had caused an ‘undoubted increase’ in the confidence and morale of the crew on dazzle-painted ships.”

With the labor required to constantly repaint ships, and the emergence of radar in World War II, dazzle disappeared from military vessels. Still, the idea of art solving a problem of war is a compelling one. Perhaps this is why a fascination with dazzle endures. This summer in New York City, artist Tauba Auerbach’s “Flow Separation” Public Art Fund project has the 1930s Fireboat John J. Harvey outfitted in dazzle. It was co-commissioned by 14-18 NOW, which has supported a series of dazzle ship projects in the UK, including Sir Peter Blake’s flamboyant design for the ferry Snowdrop now bobbing on Liverpool’s River Mersey. A century after Wilkinson’s revelation, dazzle still stuns with its kaleidoscopic shapes and colors.

Share Tweet Email Print
Have a correction or comment about this article?
Please contact us.
warWorld War IArt Documentation: Journal of the Art Libraries Society of North AmericaJournal of the Royal Society of ArtsLeonardo